Tom DeLay Whitewash Is Another Black Mark for Obama DOJ 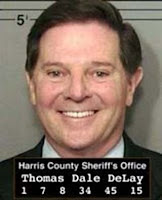 The Obama administration appeared to take a small step forward on justice issues last week when it announced a settlement with an Alabama victim of a Bush-era political prosecution.
But the administration has taken two giant steps backward with reports yesterday that former House Majority Leader Tom DeLay (R-TX) will not face federal charges in the Jack Abramoff scandal.
In the Alabama case, Huntsville defense contractor Alex Latifi will receive $290,000 in restitution for a botched prosecution brought by Alice Martin, former U.S. attorney for the Northern District of Alabama. The Obama DOJ seems to have mixed motives in the Latifi case. On one hand, the victim is receiving some measure of justice. But the settlement has the effect of covering up wrongdoing by Bush officials.
In the DeLay case, the administration's motives don't appear to be mixed. It simply wants to provide cover for Bush-era misconduct--even in the Abramoff case, which has been called the worst political scandal in modern American history. Reports The Wall Street Journal:

Mr. DeLay was targeted in the Democrats' 2006 "culture of corruption" campaign that helped sweep Republicans from power. Federal investigators looked at Mr. DeLay's ties to former lobbyist Jack Abramoff, who served four years in prison on charges of defrauding Indian tribes and using trips and other gifts to reward political favors. Two of Mr. DeLay's aides pleaded guilty to charges related to the Abramoff probe, and authorities investigated allegations that Mr. DeLay took trips, gifts and other donations in exchange for helping Abramoff clients.

If DeLay will not be prosecuted in the Abramoff case, it seems safe to say that all Bush-era scoundrels are safe under the Obama DOJ. The Center for Responsibility and Ethics in Washington (CREW) finds that prospect appalling. Reports TPM Muckraker:

"It's a sad day for America when one of the most corrupt members to ever walk the halls of Congress gets a free pass," Citizens for Responsibility and Ethics in Washington (CREW) Executive Director Melanie Sloan said in a statement.

"As we continue the work of building a Washington that is worthy of the American people, the Justice Department's decision not to prosecute Mr. DeLay for his actions sends exactly the wrong message to current and future members," Sloan said.

"The fact that Jack Abramoff and Bob Ney (R-OH) are the only two people who went to prison for one of the worst corruption scandals in congressional history is shocking," Sloan said.

"The Hammer belongs in the slammer. Mr. DeLay still has crimes to answer for in Texas --generally not considered the best place to be a criminal defendant."

Indeed, DeLay is not out of the criminal woods. Reports The Wall Street Journal:

Mr. DeLay remains in trouble over a separate matter in Texas state court, where he has been charged with failing to report certain political donations. Mr. DeLay says he committed no wrongdoing in the state case, for which a trial is set to begin as soon as next week, and in a conference call with reporters criticized what he called the "criminalization of politics."

But in the "look forward, not backward" world of the Obama DOJ, Tom DeLay has nothing to worry about. And that probably goes for other Bush-era scoundrels, as well.

More "change we can believe in."
Posted by legalschnauzer at 9:15:00 PM

yeah it's sure progressed all right
my Buddy Mark Twain says the highest class house is occupied by CHITOWN ALCAPONE leading a pack ACCORDING TO MY BUDDY/PROFESSOR
Mark Twain.. Distinct criminals..
EQUIVALENT to the FINEST criminal ring

Yeah a real 50/50% servants all right.. Con artists at their SWINDLING con game :)

Roger,
I think I wrote about this when you published one of my pieces.
Oh Yeah. Abramoff and Scanlon.
The same time Mike Scanlon "cut a deal" with Bob Riley on behalf of Mississippi's "Tonto", they cut a deal with Tom Delay on behalf of Louisiana's "Tonto".
Delay got indicted by a Texas Grand Jury and never saw the inside of a courtroom.
I think Texas ranks in the top five of most corrupt states.
Alabama is still 4th.

It's sad. These creeps get a "free ride" while the rest of us starve.

CORR: Politics-as-usual we can believe in.