The South Is NOT the Most Conservative Region in the Country

Presidential election nights can be traumatic for Southern progressives, even when our favored candidate wins.

You watch the networks fill in the electoral map, and a sea of red inevitably begins to form from Texas to South Carolina. The sea often spreads north to include Arkansas, Tennessee, Kentucky, and . . . well, you get the idea. At any moment, you expect an announcer to point to the region where you reside and say, "Here's where all the stupid people live."
So it was with utter joy that we recently learned that the South is not--I repeat, is NOT--the most conservative region in the country.
That happy news comes via a new report from Facing South, the blog of the Institute for Southern Studies (ISS). Writes Facing South editor Chris Kromm:

What's the most conservative region in the country? If asked that question, many would likely say the South -- and they'd have plenty of evidence to make their case.

But regular Facing South readers know better: As we've taken pains to document over the years, the South is far from a bastion of conservatism, and there are plenty of other places that are just as conservative, if not more.

A recent Gallup poll reveals that of the 11 most conservatives states in the country, only four are in the South. Here is the rundown: 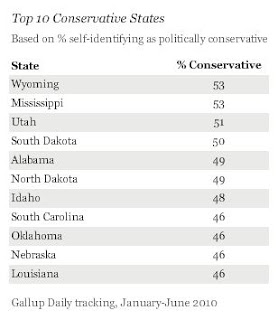 What does Kromm make of this:

So what region makes up the other seven on the list? As anyone involved in the regional analysis business will tell you, carving up and labeling different parts of the country is tricky business, and likely to start as many arguments as it settles.

But if there's a common thread to the non-South conservative states, it's that their part of that geographic constellation known as the Great Plains.

Facing South even provides a helpful map to show where the majority of conservative whack jobs really live: 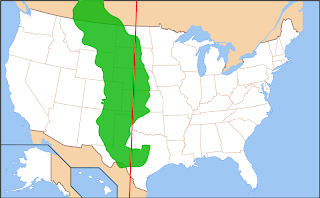 What is Kromm's take on this?

It's not a perfect match, and there are plenty of exceptions (hello, Colorado). But the Plains hold a disproportionate share of states that rank as strongly conservative, even more conservative than the South.

That's where things stand now, but what about the future? That is the key difference between the Plains and the South.

Yes, the South actually shows signs of promise. While states such as Wyoming, Utah, and South Dakota are likely to stay conservative, Kromm reports that many fast-growing Southern states are becoming more diverse--and thus, are showing signs of becoming more progressive. Yee Haw!

Fast-growing Sunbelt states in the Southeast and Southwest are where the younger and more racially diverse populations are growing most quickly . . .

These changing demographics are pushing Southern states in a more politically progressive direction; a glimpse of this future was revealed in the 2008 elections.

By contrast, National Journal's maps reveal that the Great Plains states -- especially the Upper Plains, along with Kansas and Oklahoma -- have a disproportionate share of older and whiter residents, which is helping to solidify their conservatism.

Over the years, I've had a number of folks suggest that the solution to my various legal headaches is to get the hell out of Alabama--and the South in general. And trust me, I've thought of that on numerous occasions.

But thanks to Chris Kromm, we now know there is hope for the South after all. Maybe Mrs. Schnauzer and I will settle in for a spell.
Posted by legalschnauzer at 11:05:00 AM