The Beautiful Side of an Ugly Bush "Justice" Story 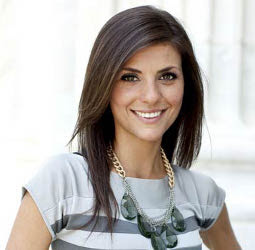 The most beautiful person at our nation's seat of power, according to The Hill, is a young woman from Huntsville, Alabama.

Her name is Alexis Latifi. And if that name sounds familiar, it probably means you kept up with the various questionable prosecutions brought by the George W. Bush Department of Justice.

Alexis Latifi not only looks stunning, but The Hill's "50 Most Beautiful Persons" article indicates she is smart, interesting, and principled. The article, however, does not mention the ugly episode that led Latifi to Washington, D.C., with the goal of helping to repair her country's badly damaged justice system.

Latifi, a 24-year-old Republican, works as a staff assistant for U.S. Sen. Richard Shelby (R-AL). As an undergraduate at Auburn University, Latifi majored in biomedical sciences and planned to go to medical school. But then her father, Huntsville defense contractor Alex Latifi, was targeted in an investigation led by Alice Martin, former U.S. attorney for the Northern District of Alabama.

The case against Alex Latifi and his company, Axion Corp., was bogus from the outset, and a federal judge eventually dismissed all charges. It became one of the most glaring examples of prosecutorial misconduct during the Bush years, drawing attention from publications such as USA Today and the ABA Journal.

Seeing her father's company ruined by a rogue federal prosecutor made a profound impact on Alexis Latifi. She changed her major as a senior to political science and now plans to go to law school. A desire to get experience in the legislative arena led her to Washington, D.C., and a position in Richard Shelby's office.

Irony abounds in the Alexis Latifi story. Evidence strongly suggests that her father was targeted because he is a Democrat of Iranian descent. The Hill lists Alexis Latifi as a Republican, even though it was a GOP administration that tried its best to ruin her family.

Does Alexis Latifi truly believe in GOP principles or is she just listed as a Republican because she works for Richard Shelby? We're not sure about the answer to that question. Our justice system cannot truly be healed as long as one of our political parties is a corrupt, dysfunctional mess. Perhaps Latifi realizes that and figures one way to move forward is to help bring about much needed change to the Republican Party.

On the subject of Richard Shelby, he should serve as a fine example of how not to do things. After all, it was Shelby and fellow GOP senator Jeff Sessions who happily signed off on Alice Martin's appointment as a U.S. attorney/thug.

Alexis Latifi is important not just because she looks really good. She has seen firsthand how a dysfunctional justice system can destroy lives. And she has radically changed her career path in an effort to help bring about reform.

It will be a tough battle. And we need more people like her.
Posted by legalschnauzer at 10:13:00 AM

Reminds me of an Iranian guy who worked with me at a local business in Marshall County. They messed with his head & called him a "sand n-word" until he finally resigned his US Citizenship and immigrated to Iran where everybody White said "he was from," even though he was born here in America.

I can empathize with Ms. Latifi after watching my mom be investigated by The ABC Board & my uncle lose his business. Whether you're talking about the bogus prosecutions or the racial public policy behind the laws themselves, all of this horse shit is rooted in White Supremacy. Like my co-worker, The Latifis are Iranian. Don Siegelman is a Jew & Karl Rove is the grandson of Karl Heinz Roverer, a Nazi SS Officer & The Gauleiter of Oldenburg. My mom married into a family of half breed Cherokees. Everybody who is on the receiving end of this out of control system of justice is less than Lilly White. You're just as likely to be the victim of a racially motivated prosecution & show trial in present day Alabama as one would have been in Germany from 1933 to 1945. Ms. Latifi may have chosen the wrong career. While you'll find out that the list of denied bar applicants has some character deficiency like a poor credit history or a minor criminal record, you won't find many White folks on that list. In fact, you'll find some White Folks practicing law today who have shot State Troopers & engaged improper communications with law enforcement and prosecutors when they were jurors. Can you feel me, my Socialist?

Don Siegelman is a Catholic.

Thanks for correcting that. I believe Siegelman's wife is Jewish, and it's easy to get that confused.

I think she is working for Senator Shelby to get experience and he is our elected official and lord knows the Republican party needs change and Washington needs to be changed as a whole. We need godly people elected instead of those who use god to boost their own political agenda.