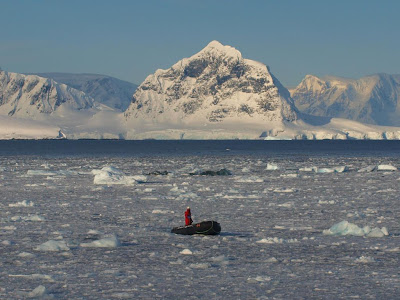 Anyone who doubts that climate change is real, and already is having a profound impact on the world's environment, should spend some time talking with James McClintock.

McClintock, a professor of polar and marine biology at the University of Alabama at Birmingham (UAB), is an international expert on Antarctica. The National Academy of Sciences has invited him to be part of a panel of 25 scientists who will participate in a workshop later this month on the impact of rapid climate change on polar marine ecosystems.

McClintock, who is writing a book called Meltdown: Climate Change on the Antarctic Peninsula, says the impact in one of the world's most remote locations is dramatic.

In the 19 years I worked as an editor at UAB, before being cheated out of my job in May 2008, I interviewed McClintock a number of times. He not only is a world-class scientist, he is adept at explaining complex scientific ideas for a lay audience. He did just that in an op-ed piece that ran Sunday in The Birmingham News.

The piece essentially asks, "Why should we be concerned about what is going on in polar marine ecosystems?" Writes McClintock:

To an Antarctic marine ecologist with 25 years of working experience and 13 research expeditions to one of the most beautiful and fragile continents on our planet, the answer is obvious. The 1,000-kilometer Antarctic Peninsula is rapidly becoming the poster child for climate change impacts worldwide. Average midwinter air temperatures have skyrocketed over the past 60 years, some 10 degrees Fahrenheit during this time period. Glaciers are rapidly melting, including the stunning Marr Glacier nestled up to the U.S. Palmer Station where I am currently conducting research with my colleagues Dr. Chuck Amsler (UAB) and Dr. Bill Baker (from the University of South Florida).

For a biologist, the signs of distress are easy to see in Antarctica:

There have been eight major breakouts of ice sheets along the peninsula over the past 30 years alone, including one the size of Rhode Island and another the size of Connecticut. As these ice sheets break apart, they are unlocking the door on land-locked glaciers, allowing them to flow ever more rapidly into the sea.

Over a similar period of time, the annual sea ice along the Western Peninsula has receded some 40 percent, both in its extent offshore and its duration. The lives of a bounty of marine organisms are intimately tied to this ice. For example, the sea-ice dependent Adelie penguin has declined by 70 percent over the past 35 years, as have Weddell seals, with their remarkable ice-chipping teeth. Krill, the shrimp-like animals that form the quintessential base of Antarctic marine food webs, are also disappearing along the western Antarctic Peninsula, likely due to the loss of their critical sea ice habitat and the microscopic plants that grow under the ice and nourish their young.

These problems might seem far away at the moment. But McClintock says they eventually could hit close to home:

So why should we in Alabama care whether climate change is impacting polar marine ecosystems such as those in Antarctica? Besides the implications of once land-bound Antarctic glacial ice contributing to global sea level rise (and you thought we only had to worry about additional oil spills along our coast), ironically, polar ecosystems provide natural laboratories to study anticipated climate change impacts in temperate and tropical marine ecosystems. For example, very small increases in sea water temperature can have dramatic near-term physiological impacts on Antarctic marine organisms that have evolved at highly constant, low temperatures over millennia.

Moreover, ocean acidification (a process whereby seawater is becoming more acidic due to absorption of elevated atmospheric CO2) will first and foremost impact polar seas due to the increased solubility of CO2 in seawater at low temperature, coupled with chemical constraints of polar high-CO2 seawater that will limit the availability of calcium carbonate minerals. By midcentury, calcified (shelled) Antarctic marine animals may very well become the first to experience levels of ocean acidity that could literally dissolve their shells. Will they be able to compensate by producing more shell material? Will they simply disappear? What will be the ecological ramifications of the potential loss of keystone species that are critical determinants of community structure? How will ocean acidification impact key fisheries species? The list of pressing questions is long, and it has important ramifications for what faces marine life closer to us here in Alabama.

So where do we go from here? The public must become educated to the very real climate challenges we face, McClintock says:

Of course, none of this means much if one remains skeptical about whether rapid, unprecedented climate change is real, or if so, whether it is largely being driven by a surplus of greenhouse gases such as carbon dioxide, a byproduct of fossil fuels used to power industry and automobiles.

Almost all scientists, including myself, need little convincing. The data supporting recent, rapid, climate change with a human fingerprint is multifaceted and overwhelming. But scientists need to do a better job of bringing this critical issue to the forefront of public discourse. It is simply too important an issue to be kicked about like a political football, to be joked about or be swept under the carpet to be dealt with by future generations.

Jim McClintock has seen firsthand that climate change is not a laughing matter:

When asked, my view is that for the sustenance of our good Earth, for your children and for theirs, we should step back a minute and objectively assess the current climates in which we live, the figurative and the physical. Only then can we really begin to position ourselves to do something about it.

Here is a video of McClintock discussing his work in Antarctica and what it means to science, including the discovery of compounds that might have anti-cancer properties. At about the 5:00 mark, he discusses signs of climate change:

Watch your sassy mouth boy! I have been informed that some invisible man in the sky is getting us ready for our eternal punishment because we have criticized his chosen people. If we don't repent now, it's only going to get hotter.