A message to our readers: Eye surgery forces Legal Schnauzer to take a break from the blogosphere 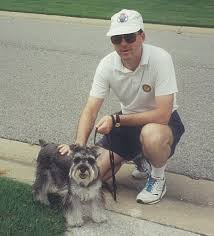 I will be undergoing cataract surgery over roughly the next two weeks, so Legal Schnauzer will go on hiatus while I focus on getting my vision back in focus. The right eye will receive treatment first, followed by a break for healing, and then the left eye.

This is my first experience with an eye-related procedure, so there is some nervousness involved. But I am in good medical hands, and I am deeply grateful for that. The cataracts definitely are affecting my vision, so it is time for them to go -- and I look forward to bidding them farewell. Wish me luck,, and I look forward to rejoining you in the blogger world before too long. Our best to all of you, from the Schnauzer family.

Perhaps the most politically charged criminal trial of the 2000s is fast approaching, and a citizen might like to think the prosecutor bringing the case is the kind of honorable, bipartisan sort fit for such a task. But Special Counsel John Durham, appointed by Trump Attorney General William Barr, has incidents in his past that suggest he might not be the right guy to oversee the case against Hillary Clinton-aligned attorney Michael Sussmann, who is charged with lying to the FBI. That's from investigative reporting by Andrew Kreig at the Justice Integrity Project (JIP). And it suggests the Sussmann trial might produce plenty of political fireworks -- based in the RussiaGate scandal of the 2016 presidential election and even touching on the U.S. attorneys firings of the George W. Bush era. But will the jury trial, set to begin May 16, produce justice? Kreig's reporting produces serious doubts about that. From Kreig's post at JIP, under the headline "On Eve of 'RussiaGate' Trial, Questions Loom About Special Counsel Durham":

With final preparations under way for one of the most politically explosive federal prosecutions in years, U.S. Justice Department Special Counsel John H. Durham’s record reveals legal error that undercuts his image as a straight-shooting seeker of justice.

In a 2008 ruling that has never been reported by a major news outlet, a New York federal appeals court vacated bribery, wire fraud and racketeering convictions because a team led by Durham, then the Deputy U.S. Attorney in Connecticut (and Acting U.S. attorney for supervising the prosecution), illegally withheld evidence that could have helped federal defendant Charles Spadoni defend himself in a corruption case.

In another case, a Connecticut federal judge overturned a conviction in 2003 because of what she ruled in a 57-page decision was Durham's repeated prosecutorial misconduct at trial, a sanction that authorities stated is extremely rare in the federal system.

Is this the kind of conduct the public should expect from the prosecutor in a case that likely will touch on international relations and national security? Kreig's timely reporting suggests the answer is no. Kreig writes:

Past performance is relevant now because Durham's three-year probe of alleged illegality pertaining to the 2016 U.S. presidential election is reaching a pivotal and controversial juncture with the trial this month of the prominent cyberlaw attorney Michael Sussmann on a claim that Sussmann falsely denied that he was representing Democratic nominee Hillary Clinton when he sought to alert FBI general counsel James Baker in the fall of 2016 to suspicions of Russian interference.

Sussmann, his attorneys and some independent commentators have denied wrongdoing and claimed that the prosecution is exceptionally weak and also tainted by political partisanship by Durham, a career prosecutor who was also nominated by President Trump for the political post of U.S. attorney for Connecticut.

What brings a special edge to the Sussmann case? Kreig explains:

Durham’s case against Sussmann, a former partner at the D.C. office of law firm Perkins Coie, has generated substantial interest in the national press, particularly in pro-Trump circles where some Trump supporters regard it as their last best hope to vindicate Trump’s 2016 election victory as a purely American popular effort, thereby debunking claims that Russian operatives interfered in the 2016 election to hurt Clinton and other Democratic candidates.

Sussmann and his defenders, on the other hand, have defended his actions as both non-criminal and reasonable, particularly in view of what they see as confirmed threats to the elections process posed by Russians, Trump and their allies. Sussmann’s defense lawyers accused Durham, for example, of promoting a “baseless narrative that the Clinton campaign conspired with others to trick the federal government into investigating ties between President Trump and Russia.”

Sussmann’s attorneys also have pointed to evidentiary problems in Durham’s case, including the lack of contemporary notes by the key FBI witness, James Baker, to support the Durham prosecution team's allegation that Sussmann criminally deceived Baker regarding his relevant clients.

The case, in other words, has come to be regarded in some quarters as either a rigorous and fearless application of the law by Durham and his team -- or, conversely, as an example of over-zealous overreach by an unaccountable prosecutor suspected of bringing a baseless prosecution to favor pro-Trump politics.

What about those ties to a George W. Bush-era scandal? Here's how they enter the picture:

A consistent theme in the news accounts exploring the Durham investigation is that prosecutor and his team, including Nora R. Dannehy, a former Acting U.S. Attorney in Connecticut and longtime Durham colleague, bring to their work outstanding reputations as career prosecutors long entrusted to fulfill their responsibilities with the highest standards of professional expertise and justice-seeking.

Here’s the story: New Questions Raised About Prosecutor Who Cleared Bush Officials in U.S. Attorney Firings, which we at the Justice Integrity Project originally reported in 2010 in Nieman Watchdog, a niche website published by Harvard University and edited by Barry Sussman, the former Watergate editor of The Washington Post who supervised its coverage of that scandal. Sussman is also the author of the recently released fifth edition of The Great Cover-up, a widely praised account of the Watergate probe.

The Nieman Watchdog story focused primarily on the appointment of Durham and Dannehy as special counsel investigating allegations of CIA and Justice Department misconduct. The story began this way:

"Four days before Nora Dannehy was appointed to investigate the Bush administration’s U.S. attorney firing scandal, a team of lawyers she led was found to have illegally suppressed evidence in a major political corruption case.....[T]his previously unreported fact calls her entire investigation into question as well as that of a similar investigation by her colleague John Durham of DOJ and CIA decision-making involving torture."

The New York-based U.S. Second Circuit Court of Appeals had ruled that Durham’s team should have known that the Spadoni defense was entitled to an FBI agent's notes, which could have been used by Spadoni to argue that his conduct was legal.

The three-judge court ruled unanimously in vacating the major convictions against Spadoni. Judges held that the evidence unconstitutionally withheld might have helped Spadoni's defense against prosecution claims that he and his employer, Triumph Capital, Inc., illegally conspired to hire a political consultant in hopes of winning a major contract from the State of Connecticut.

U.S. District Judge John Gleeson, a former federal prosecutor, authored the opinion, which is available here. It did not name the federal prosecutors at fault but the case caption and relevant filings were signed by Durham and Dannehy as the most senior attorneys.

Durham and Dannehy have maintained stellar reputations as public servants of high integrity and competence. But Kreig's reporting raises doubts about whether those reputations are deserved:

Durham and Dannehy have achieved widespread praise and career advancement as special prosecutors entrusted with reviewing several of the most sensitive Justice Department controversies of recent years. These include investigations of suppression of evidence, partisan prosecutions or other alleged serious wrongdoing by Justice Department and CIA personnel in major proceedings of historic stature.

That pattern continued after May 2019, when the Trump-appointed Attorney General William Barr named Durham, later assisted by Dannehy, to investigate the Trump team’s claims that the FBI and other Justice Department concocted phony claims of Russian interference in the 2016 presidential election along with Democratic operatives associated with Hillary Clinton’s campaign.

Tabloids, pro-Trump media outlets and some leftist critics of the Democratic Party have labeled the claims of Russian interference "RussiaGate" in many news stories and commentaries that suggest that Russian "interference" is colossal fraud on par with the Nixon-era scandal of the 1972 break-in by GOP and CIA operatives of the Democratic National Committee headquarters at the Watergate complex in Washington, DC. . . .

Fox News, pro-Trump Republican officers, and many bloggers have similarly advanced arguments that Trump and Russians have been falsely accused.

"Radio silence" is beaming from the U.S. Attorney's Office in Birmingham, providing little illumination but raising questions about Matrix matters in Florida

Evidence points to  a federal investigation, possibly focused on obstruction of justice allegations related  to powerful entities in Birmingham. Such a probe likely would tie back to the highly publicized North Birmingham Superfund bribery scandal. But on current matters, no publicity is forthcoming from the Office of the U.S. Attorney for the Northern District of Alabama, headed by Prim Escalona.

Publisher K.B. Forbes describes the current scenario in a post at banbalch.com, under the headline "Radio Silence from the Office of the U.S. Attorney for the Northern District of Alabama." Writes Forbes:

For almost two weeks, we have been seeking confirmation, denial or a “no comment” from the the public affairs officials at the Office of the U.S. Attorney for the Northern District of Alabama.

We were told to go through the office by a top official at the U.S. Department of Homeland Security that investigates child exploitation and human trafficking.

What is the focus of Forbes query?

The two questions on two separate matters that we asked about are based in part on unsubstantiated allegations.

Since October, sources have told us of an alleged federal obstruction of justice probe of Alabama Power and its CEO Mark A. Crosswhite related to the North Birmingham Bribery Trial.

We know authorities at Homeland Security received a detailed debriefing on Espy and the change of IP addresses at Balch. We were trying to confirm if a probe was completed, ongoing or closed.

Questions regarding Lineberry are particularly puzzling because evidence indicates he did not play a major role in the North Birmingham matter. Writes Forbes:

On the other matter related to the North Birmingham Bribery Scandal, Lineberry, who lived just over a mile from Overton Road where the FBI raid in Mountain Brook supposedly took place on January 26th, sadly killed himself.

We understand some law enforcement authorities may obscure locations to protect the integrity of an ongoing investigation.

Frankly speaking, Lineberry’s work in the North Birmingham Bribery Scandal was limited. From the invoices presented at the criminal trial, his total billable hours to set up the Alliance for Jobs and the Economy (AJE) amounted to less that 5 hours at a cost of under $2,000.

So, where do things stand at the moment? Forbes does his best to provide an answer -- and he even adds an intriguing question:

The radio silence does not confirm or negate anything.

Something deep is going on and sources tell us that the Matrix Meltdown between “Sloppy Joe” Perkins and his once-protégé Jeff Pitts has now allegedly spurred a federal investigation out of Florida.

Follow-up question: Is the Office of the U.S. Attorney for the Northern District of Alabama now collaborating with counterparts in Florida?