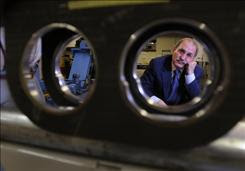 At least one victim of the George W. Bush Justice Department has received some measure of justice. An attorney in the case says he expects to see more such settlements in the future.

The U.S. Department of Justice has agreed to pay $290,000 in restitution to Alex Latifi, a Huntsville, Alabama, defense contractor who was targeted for a botched prosecution that appeared to be politically motivated.

In announcing the settlement, the government admitted no wrongdoing. Latifi, the owner of Axion Corp., agreed to not pursue claims of misconduct and bad faith against government prosecutors, who were led by Alice Martin, former U.S. attorney for the Northern District of Alabama. Latifi is an Iranian-born U.S. citizen, and the prosecution had racial overtones from the outset.

The settlement came after Latifi's attorneys sought to subpoena Martin and others involved in the prosecution. Henry Frohsin, one of Latifi's lawyers, said it was a highly unusual ending to a case involving the federal government.

“It's a revolutionary ruling and case,” said Mr. Frohsin. “I can't speak for the Department of Justice, but it's not likely that you will find any other case where the government has voluntarily agreed to make restitution. The fact is it was a misguided and unfair prosecution by the Bush administration and DOJ that never should have been waged in the first place and one the government ultimately lost. We believe this settlement begins to rectify some of the evils of the past administration.”

Jim Barger, another Latifi attorney, hinted at some of the obstacles his client faced in the case:

“We knew from the start that it would be a long and difficult battle,” says Mr. Barger. “After all, the U.S. Department of Justice is the largest and most powerful legal organization in the world. But we also knew that the government was wrong in this case, and we were not going to give up. We subpoenaed Alice Martin, David Estes, and other members of the government’s legal team and were prepared to question them under oath to expose the extreme misconduct in this case."

Axion, which once employed about 60 people, is slowly recovering. After being virtually shuttered, it now has about 12 employees and is aggressively pursuing contracts worth millions of dollars--and that could lead to rapid growth.
"Of course, we’re pleased that Mr. Latifi will receive this compensation, but his family-owned defense contracting company was basically decimated. Alex is now fighting to get his company and his reputation back, and he is succeeding. Over the past two years Axion Corporation has secured a number of contracts with the U.S. Government to produce parts and equipment for the Defense Department and war efforts in Iraq and Afghanistan. We are proud to say that he produces one of the most important safety devices in the war theaters, the Abrams Mine Roller, which protects our soldiers against IEDs.”

The government previously had paid $70,000 to Latifi for attorney fees. The restitution payment will go directly to Latifi. Reports The Huntsville Times:

Peggy Sanford, a spokesman for U.S. Attorney Joyce White Vance, said given the government's prior payment to Latifi for legal fees, Vance's office conferred with Justice Department officials in Washington and decided a settlement to resolve other claims was in the best interest of the United States.

"This was so we could devote our resources to protecting the people in this district rather than expending them on extended litigation in which we believe we would have ultimately prevailed, but the outcome is never certain," Sanford said.

The Latifi settlement definitely is historic in one sense. It is the first case involving misconduct under the Bush Department of Justice that the Obama DOJ has settled. Frohsin does not expect it to be the last.

“The Axion case should be a clear signal to the DOJ and to future defendants that a guilty plea is not always the answer to a government charge. The Axion case may also ultimately have the positive effect of encouraging the government to focus on developing meritorious cases, rather than pursuing weak or marginal cases of dubious merit.”
Posted by legalschnauzer at 11:16:00 AM