GOP House Members Are Setting the Stage for Investigations of Obama 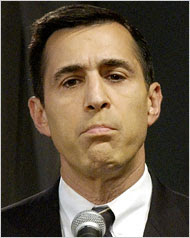 President Barack Obama has stubbornly taken a "look forward, not backwards" philosophy to possible criminal acts during the Bush administration. But Republicans are sending signals that they will not take such an approach if they are able to win back the U.S. House of Reprsentatives in the November elections.

Rep. Darrell Issa (R-CA) is strongly indicating that he will launch numerous investigations of the Obama administration if he becomes chairman of the House Oversight and Government Reform Committee. Issa already has raised questions about possible White House interference in U.S. Senate races in Pennsylvania and Colorado. In a recent interview with The Washington Post, Issa made it clear that aggressive investigations are coming if he replaces Rep. Edolphus Towns (D-NY) as chair of the Oversight Committee.

Regular Americans could wind up paying a huge economic price for Obama's timidity.

As we have stated on this blog several times, Obama could pay a heavy price for his decision to let Bush officials off the hook. Reports the Post:

From his perch as the top Republican on the House Oversight and Government Reform Committee, Issa has spent the last 15 months constantly blasting the Obama administration on nearly every controversy and calling for countless investigations that the Democratic-controlled committee refuses to order.

But Issa is finally starting to hit some of his targets. He was one of the leading Republicans in pushing the White House to reveal more details about its discussions to persuade Rep. Joe Sestak (D-Pa.) to forgo a Senate primary run against Sen. Arlen Specter (D-Pa.) in return for a possible government job. Sestak won the primary, and now another Senate candidate challenging an incumbent Democrat, Andrew Romanoff in Colorado, has acknowledged having similar discussions with White House officials. Issa has suggested the White House violated the law and may have offered Sestak "a bribe" in the process, assertions that have not been proved.

Issa, however, is not a single-issue attack dog. He has shown that he will go after Obama from multiple directions:

He is also demanding the administration release details of Cabinet officials' travel to events that might benefit Democratic candidates, continuing to cast Obama as embracing "politics as usual."

"It is abundantly clear that this kind of conduct is contrary to President Obama's pledge to change 'business as usual' and that his administration has engaged in the kind of political shenanigans he once campaigned to end," he said.

Veteran journalist Robert Parry has written numerous times at Consortium News about Bill Clinton's decision to let apparent crimes of the Reagan and Bush I presidencies go uninvestigated. Republicans rewarded Clinton by promptly launching investigations of the president when they took back Congress in 1994. Clinton was hampered for the final six years he was in office, and his presidency never fully recovered.

Parry writes in a recent piece at Consortium News and Truthout that Obama appears to be heading down the same path:

If Republicans gain control of at least one house of Congress, they would surely launch a wave of investigations against Obama, much as the GOP did against Clinton.

Unlike the Democrats who shy away from investigative controversies--turning their backs even on historic scandals such as Iran-Contra, Iraq-gate and contra-cocaine trafficking in the 1980s as well as George W. Bush’s torture abuses and illegal wars last decade--the Republicans have no such qualms.

So, with Obama embattled and the Democratic congressional majorities likely to shrink or disappear, the chances for the United States to confront its structural problems will only worsen.

With unemployment staying high, many middle-class Americans will sink into a growing under-class. The rich will fight to keep as much of their oversized salaries and bonuses as possible, with the Republicans ensuring that the one political sure-thing will be that legislated tax increases won’t happen.

Indeed, the simplest way to address the nation’s myriad of problems – by restoring the marginal tax rates for the rich back to the historical levels of, say, the Kennedy era (around 60 percent on their top income) – is the one thing that is almost impossible to contemplate.

Parry says America desperately needs a president who will challenge right-wing orthodoxy and educate the public about the road to sustained prosperity. Obama increasingly is showing that he doesn't have the stomach for such a challenging task:

Though the Republican vision of the future appears to guarantee a continued decline in the quality of American life, the Right’s propaganda machinery makes any suggestion about the need to tax the rich more heavily akin to socialism. The Revolutionary War slogan, “no taxation without representation,” has been transformed to something close to “no taxation, period.”

Remember the famous encounter between candidate Obama and “Joe the Plumber,” who decried Obama’s idea about the need to redistribute wealth from the upper-income levels to middle- and working-class Americans so the economy would work better.

That debate remains at the center of America’s economic struggles, as it has been since the Great Depression when income inequality and financial speculation were two key factors in the mass unemployment that followed the Crash of 1929. Two lessons learned were that a strong middle class and reasonable government regulations were necessary for a healthy economy.

What are the keys to American prosperity? A strong middle class and reasonable government regulations. Obama is a smart guy who clearly knows that. And he should be smart enough to know that the best route to prosperity requires investigations of GOP criminals, showing that modern conservatism is a damaged brand that is leading our nation toward ruin.

You simply cannot seek bipartisan solutions with a Republican Party that has become grotesquely dysfunctional. Obama has had roughly 19 months to help educate the public about the dangers of modern conservatism. But he has failed to do it.

That has left an opening for the likes of Darrell Issa to take center stage. If that happens, Obama's opportunity probably will be gone for good.
Posted by legalschnauzer at 10:11:00 AM

If Republicans regain control of Congress in November, I wouldn't be surprised to see them try to have Obama impeached for war crimes in Afghanistan or financial malfeasance on Wall Street that was set in motion by the Bush Administration. It's a conservative thing to prosecute the guy who tried to clean up the mess or frame the useful idiot (see Lee Harvey Oswald & Walter Leroy Moody) while allowing the real criminals to go free.

Thanks for covering this.

We can depend on it.

Like the Obamaniacs haven't left plenty for them to salivate over.

Whether there're any real wrongs being done or not.

And what a perfect vehicle in which to pursue him.

The Post having been perverted to the 'thug life since Bush I.

In a recent interview with The Washington Post, Issa made it clear that aggressive investigations are coming if he replaces Rep. Edolphus Towns (D-NY) as chair of the Oversight Committee.
___________

Then again, it could be that the truth is NOTHING ILLEGAL happened in the Bush admin. Incompetent perhaps but not illegal. This administration (NOT THIS PRESIDENT) however has been plagued with scandal including the not one, but two ethics trials about to start in Sept relating to two prominent Dems.

Sorry, what's wrong with open transparent government - no matter which party is in office? Clearly Obama doesn't support it. If he did, he would be investigating a whole lot of criminal activity on the part of Cheney and Bush. I (like Cindy Sheehan) personally feel Obama should be impeached for ordering the extrajudicial assassination of American citizens and invading Pakistan without Congressional authority. I think we would learn a whole lot about the President's past and some of the unsavory characters he seems to answer to. I blog about this at http://stuartbramhall.aegauthorblogs.com/2010/07/19/who-pulls-obamas-strings/

Obama had a lot on his plate when he was elected...I don't think he had time for a new investigation with two never-ending wars and a financial crisis looming. I think now would be a good time to revisit the subject, before the primaries. The problem seems to be that there are too many crises, back-to-back. I expected this behavior from Republicans...the party of "no" scruples.

one for mr shuler:
http://pubrecord.org/law/609/obamas-counsel-accused-of-ethics-breach-over-role-in-brokering-roves-testimony/

deal with karl rove, remember this one?