Don Siegelman and the Evil of a Political Prosecution 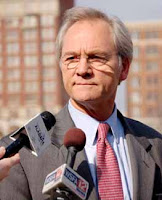 Our little corner of the blogosphere probably has produced as much coverage about the Don Siegelman case as any other spot on the Web. So our Schnauzer eyes and ears stay tuned for comments--informed and otherwise--about the case.

A common refrain we hear from the anti-Siegelman crowd goes something like this: "Well, the prosecution might have been politically motivated, but a jury found him guilty, so it doesn't really matter."

This, of course, ignores the fact that improper jury instructions were given--plus ample evidence that the judge was corrupt and the jury was tainted. But it misses the larger point. Under the law, it definitely does matter if a prosecution was politically motivated. In fact, such a prosecution desecrates one of our democracy's building blocks--the Fifth Amendment right to equal protection.

The U.S. Supreme Court has held "selectivity in the enforcement of criminal laws is, of course, subject to constitutional constraints." U.S. v. Batchelder, 442 U.S. 144 (1979).

The nation's highest court also has found that the Equal Protection Clause prohibits selective enforcement "based upon an unjustifiable standard such as race, religion, or other arbitrary classification." Oyler v. Boles, 368 U.S. 448 (1962).

Clearly, enforcement based on political affiliation falls under the kind of arbitrary classification that is prohibited by the Fifth Amendment. (Siegelman's Motion for a New Trial can be viewed at the end of this post.)

To support a defense of selective or discriminatory prosecution, a defendant bears a heavy burden of establishing, at least prima facie, (1) that, while others similarly situated have not generally been proceeded against because of conduct of the type forming the basis of the charge against him, he has been singled out for prosecution, and (2) that the government’s discriminatory selection of him for prosecution has been invidious or in bad faith, i.e., based upon such impermissible considerations as race, religion, or the desire to prevent his exercise of constitutional rights. These two essential elements are sometimes referred to as ‘intentional and purposeful discrimination.’

Appellate courts historically have been reluctant to override prosecutorial discretion and have established an assumption that a prosecutor has not violated equal protection. To overcome that, a criminal defendant must present "clear evidence to the contrary." United States v. Armstrong, 517 U.S. 456 (1996).

Can Siegelman meet this burden? Consider this passage from his Motion for a New Trial:

There is additional evidence of similarly situated individuals who were not prosecuted by the Republican-controlled Department of Justice:

c. In 2008, Raymond Harbert of Harbert Management Company donated $10,000 to Governor Riley’s campaign. In March 2009, Harbert was appointed to the Auburn University Board of Trustees;

d. Michael Scanlon, a lobbyist convicted in the Abramoff lobbying scandal worked with Jack Abramoff to funnel millions of dollars from the Choctaw Indians into Alabama during the 2002 governor’s race according to the McCain Report. . . . An e-mail exchange between Abramoff and Scanlon on December 3, 2002 indicated that Abramoff had spoken with “Nell” (Rogers) of the Choctaws and that “she definitely wants Riley to shut down the Poarch Creek operation, including his announcing that anyone caught gambling there can’t qualify for a state contract or something like that. . . . ” According to a Birmingham News story dated December 9, 2004, the Poarch Creek Indians are complying with federal regulators who objected to two-thirds of their gaming machines. . . . The article quotes U.S. Attorney Leura Canary as stating, “the Poarch Creek tribe has been extremely cooperative.”

f. According to an article published in the Mobile Press Register on April 21, 2008, “At least 86 individuals will enjoy access to Alabama Governor Bob Riley, thanks to their pledges of $40,000 each to a Republican fundraising committee designed to gain control of the Legislature. . . . ” The article goes on to say that “members of the Circle have pledged $10,000 a year over the next four years as part of the fundraising program called Campaign 2010. In return, the donors have been promised access to exclusive events and conference calls with Riley”.

That's at least six examples of similarly situated individuals who were not prosecuted for acts similar to those alleged in the Siegelman case. If Siegelman and codefendant Richard Scrushy were granted an evidentiary hearing, one can only imagine how much evidence they could gather to support their claims of selective prosecution based on political affiliation.

The Siegelman/Scrushy case might eventually come down to this: Is it more important that we protect the  of concept of prosecutorial discretion or that we protect individuals from abusive prosecutions? One is a legal doctrine created by the legal profession; the other is a constitutional guarantee. Which is more important?

More than 100 years ago, the U.S. Supreme Court warned about the dangers of rogue prosecutors who use their powers for improper reasons. In Yick Wo v. Hopkins, 118 U.S. 356 (1886), the court wrote:

Though the law itself be fair on its face, and impartial in appearance, yet, if it is applied with an evil eye and an unequal hand, so as practically to make unjust and illegal discriminations between persons in similar circumstances, material to their rights, the denial of equal justice is still within the prohibition of the constitution.

The outcome of the Siegelman case will tell us.

Siegelman--Motion for New Trial
Posted by legalschnauzer at 11:52:00 AM