Obama Administration Seems to be Terrified of White People 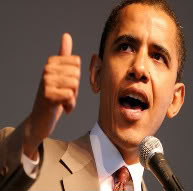 But the Obama record, so far, has not been nearly as strong as it could have been. And based on three major news stories from the past two weeks, we are starting to think there is a fundamental reason for that: The Obama administration is terrified of white people.

It's not that Obama and other centrist Dems are afraid of all white people. Heck, they aren't remotely afraid of white progressives. They happily trample all over white progressives and expect to hear, "Thank you, sir, may I have another?" We suspect centrists aren't afraid of white right wingers, either. Why be fearful of someone you know is against you and is too far off the deep end to worry about?

But white independents, the people who are too clueless to know what they think? Those are the people that give Obama and his centrist pals night sweats. Centrists seem convinced that clueless white people decide elections. So they live in mortal fear that they might somehow offend the sensibilities of, and shake the fragile psyches belonging to, the mindless white masses.

What brings this thought to the forefront? Consider three major news stories from the past couple of weeks:

* The Whitewash of the U.S. Attorney Firings--The six-page letter outlining special prosecutor Nora Dannehy's findings makes it clear that this "investigation" had a predetermined outcome. Dannehy finds that criminal charges against Bush administration officials were not warranted, but she provides no facts or legitimate law to back that up. The Obama Justice Department apparently was fine with that. And it was willing to overlook Dannehy's clear conflicts of interests and her connections to prosecutorial misconduct in a previous case. Why? Our guess is that the administration is terrified that white America would revolt at the sight of Bush officials--all white probably, with the exception of Alberto Gonzalez--being paraded before a tribunal. It's one thing to have Bill Clinton investigated for years. But to have Dubya and various Bush-family cronies under the hot lights? The White House probably figures that white independents don't have the stomach for that.

* The Economy Is Still Tanking, Stupid--Obama's stimulus package perhaps has saved us from a depression. But many leading economists say it was not nearly enough, and we could be heading for a double-dip recession--especially with unemployment hanging around 10 percent. A recent cover story in Time magazine indicates the Obama administration knows what needs to be done--but it is too timid to do it. Reports Time in "The Good and Bad Economy":

For the moment, senior Obama advisers . . . foresee a long and slow recovery, one they would like to speed up with the fuel of more government stimulus to get money into the pockets of consumers who will spend it fast. They don't expect another economic crash—but they also know it's possible, and would sleep better if a new wave of cash were headed into the system. And they are quick to note that despite what their critics may say, this is not an excuse to promote a loony-left tax-and-spend agenda, although even a recent Goldman Sachs analysis recommended that D.C. policymakers consider more stimulus spending.

But Obama and his advisers know their hands are tied. Polls show that voters either don't understand--or don't buy--the long-established economic theory of John Maynard Keynes, which calls for more government spending (even if it means running up deficits) to help the economy through hard times.

So what is the administration's response?

To what "people" is Bernstein referring? Our guess is it's white independents. These are people who don't have a clue how the economy operates. But the rest of us are being held hostage to the White House's fears of alienating the white "muddled masses" with the truth.

So let's summarize. White independents tend to be wrong about:

* Civil-rights issues, as exhibited by the Shirley Sherrod story;

* Justice issues, as exhibited by the U.S. attorney firings;

* Economic issues, as exhibited by the need for more stimulus money to help get us out of recession.

The White House could take advantage of numerous "teachable moments" on all of these subjects. And it's possible that quite a few white independents might actually be willing to learn--if someone would give it a shot.

But the Obama administration has shown no signs that it will even try. And that's probably because it fears a fierce white blow back.

Meanwhile, our nation's fabric continues to tear.
Posted by legalschnauzer at 11:02:00 AM

Yikes Roger .. pushing all the wrong buttons with that one.