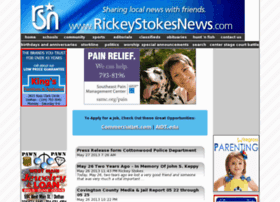 Rickey Stokes, editor of Dothan-based RickeyStokesNews.com (RSN), writes in a post dated August 17 that our reports at Legal Schnauzer on the Strange/Garrison affair are "highly questionable." Stokes said he reached that conclusion after conversations with two sources, one of whom Stokes said he "would trust with my life in his hands."

We noted in a post dated August 21 that Stokes likely fell victim to a Bill Baxley con job. What was the con? We stated that Baxley, a member of a prominent Dothan family, probably was the source for Stokes' post. We further stated that Baxley probably did not disclose that he represented Jessica Garrison and had sent two letters to me threatening a lawsuit on her behalf.

In a comment posted to wiregrasslive.com at 1:48 p.m. on September 1, Stokes confirms that our suspicions were right on target: Bill Baxley was the source of his post claiming our reporting was "highly questionable"--and Baxley did not disclose his personal stake in the matter, via his threatened lawsuit on Jessica Garrison's behalf. (See the full Stokes comment at the end of this post.)

To my knowledge, Stokes is yet to print a retraction of a story that originated with a self-serving, ill-informed source. But Stokes did pipe up when a number of commenters at wiregrasslive.com questioned his reporting on the Strange/Garrison affair. Stokes provided background on how his post took life, and here is part of that explanation, with no editing on my part:


I have not read each post on this topic or Legal Schnauzer. I have read some of them. And yes as Catfish said I am at the lake. In fact I am sitting at boat ramp where I just unloaded my son and his friends into the river for them to take a river run towards Columbia.

As to the Dothan Baxley family contacting me about the article, the answer is NO. As to Bill Baxley and I having a telephone conversation over this matter, yes. My entire adult life I have known Bill and Wade Baxley. I started in 1977, just prior to my starting Baxley had been the District Attorney in Houston and Henry County. At the time, the political party you run on was Democrat, and Wade Baxley was Chairman of the Democractic Party in Houston County. Wade was also on the Houston County Personnel Board when I went to the and got a Cadet Deputy Sheriff Program started where you could get paid to work. I was a dispatcher with the Sheriff Department after school, worked 3 PM to 11 PM and was paid. So I have known them for years. My wife growing up lived next door to Bill and Lucy Baxley.

That relationship is what resulted in the phone call. And yes, after a conversation with Bill explaining some things to me, not that he was filing a lawsuit against anyone, but answering some questions, resulted in my article.


Another translation:  When Baxley felt the need to discredit a journalist--in a case where the journalist's reporting is absolutely on target--he turned to a blogger from his hometown. Baxley probably figured that blogger would accept most everything he said at face value--and Stokes proved that Baxley was correct.

The bigger issue, in my view, involves the actions of Bill Baxley, who is a member of the bar and an "officer of the court." Let's consider a few questions that grow out of Baxley's behavior:

* If Baxley truly believes Jessica Garrison had no affair with Luther Strange, why was he deceptive about his connections to Ms. Garrison? Stokes makes it clear that Baxley did not tell him about his participation in a threatened lawsuit. This is less clear, but it appears that Baxley did not disclose to Stokes that he represented Garrison. We now know, for sure, that Bill Baxley was not fully up front with a blogger from his hometown. Why?

* If Baxley truly believes Jessica Garrison had no affair with Luther Strange, why did he not present Ms. Garrison for Stokes to interview? As a lawyer, political operative and former campaign manager, Jessica Garrison certainly has a voice. She has put herself in the public arena and made herself a statewide figure--and she is somewhat of a national figure via her role in the Republican Attorneys General Association (RAGA). Baxley could have said, "Hey Rickey, meet Jessica--and she would be glad to answer any questions you might have about her relationship with Luther Strange." Why didn't that happen?

We don't know for sure what was said in the Baxley/Stokes discussion, but that can be revealed in the litigation process. It seems apparent, however, that Baxley claimed my reporting was inaccurate, unprofessional, and driven by malicious intent. Baxley did this while hiding some, or all, of his connection to Jessica Garrison. Stokes proceeded to write that it was "unfair" for me to "make up something that is not true."

What kind of liability might Mr. Baxley, Ms. Garrison, and Mr. Stokes have toward a journalist they have defamed?


Rickey Stokes Comment by Roger Shuler
Posted by legalschnauzer at 5:05:00 AM

LS - your documents show that Jessica told the court in August of 2011 - that is 2011 - that she had a house in Crestline. But the house she lives in - in Crestline - was not even up for auction until the summer of 2012 - that is 2012. Did she live elsewhere in Crestline for a year, or did she move into a house that hadn't even had an auction date set - then got that house for less than a tenth of its value?

Ricky sticky so stoked about the donation button didn't think to see the writing on all the subway walls, halls, dining room tables even!

WHY THE WHITE HOUSE EVEN KNOWS, ricky ticky tavi get those no good for nothing vipers, remember your mission you MONGOOSE?

Take that donation and give it to the Legal Schnauzer community cause it is the noble act for a Ricky Ticki Tavi Mongoose to kill the bad poisoned extensions of up to do damn good.

So Ricky gets to be an authority on line and the truth in the real world doesn't get the power because the stokes who are the spokes for the corruption get to write what they are told?

Ricky you have failed your readership and therefore, no more digits for you to destroy the truth.

Your digits now must be the reality of FORENSICS.

Ricky the deep probe must happen to see the truth and then set that Eagle free, just like you say you are all about - freedom, truth and of course justice as an EQUAL CONTRACT 'the equity piece' for ALL Americans, it's the law in our U.S. Constitution you know!

You took liberty to print without even a hello Mr. Roger Shuler, another "Journalist", GETTING the FACTS STRAIGHT,

"JUST THE FACTS, Ma'am." THAT IS A FAMOUS QUOTE OF A POLICE ASKING A QUESTION ABOUT THE INCIDENT. ALL 'JOURNALISTS' IN REAL INK AND PRINT, KNOW THEIR FACTS.

And look at Detroit once the facts are straightened out!

Same story, bandits, robbers, liars, cheaters, thieves and all for the classless that thinks the majority of people are too dumb to read, write, think through the problem of the moment which is a repeat of history.

BIGGEST criminals are those that pretend law is nothing but a bothersome dam in the river of capitalists' ownership society USA.

In a word, insane.

LS, this looks to me like a prideful southern man's way of saying he was had.

If Ricky fessed up on the wiregrasslive forum, I don't understand why he doesn't report on his blog what happened? It's not a sin to make a mistake, but to not correct it and let it hang out there, that's bad.

You raise the key point here, LS. If Ricky Stokes was a real journalist, he would have told Dollar Bill Baxley, "Hey, I want to interview your client about this." If Dollar Bill didn't agree, and he wouldn't have, that would have told Mr. Stokes all he needed to know.

This is what happens when you blindly put your trust in a guy like Bill Baxley. Maybe the Baxley family is one of Rickey's sponsors?

You are right, @9:04. Lots of funky things seem to be going on with the purchase of Jessica's house. The timeline doesn't add up, and neither does the money line. More coming on those subjects soon.

There is NO doubt that Bill. Luther & Jess hood winked stokes! Its starting to look to me that they are more interested in finding out your sources and commenters LS! They (probably more than just these 3) want to know who is helping you! I'd bet they trust no one lately! Not a good feeling to have is it Y'ALL?

I think Rickey Stokes does way more good than harm. Just too bad that Bill Baxley took him for a ride on this one.

I strongly suspect that the conversation between Stokes and Baxley would be grounds for a defamation claim of your own, LS.