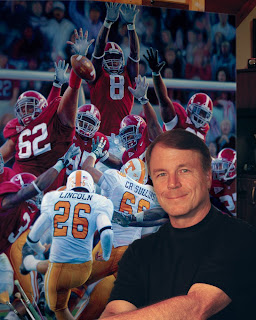 The University of Alabama has not been able to beat Daniel Moore fair and square in a courtroom. So the university apparently has enlisted the help of its higher-education buddies in an effort to overwhelm the Birmingham-based artist and his First Amendment rights.

Twenty-seven universities have asked the U.S. 11th Circuit Court of Appeals to allow them to file a brief supporting Alabama's lawsuit against Moore, one of the best known sports artists in the nation.

Alabama apparently thinks there is strength in numbers. But the law seems to be squarely on Moore's side. Federal District Judge Robert Propst ruled last November that Moore's paintings of classic moments in University of Alabama football history do not violate trademark law.

It's hard to see how the 11th Circuit could not agree. After all, Moore's paintings, of public events, clearly appear to be protected by the First Amendment right to free expression.

That makes you wonder why Alabama picked this fight by filing a lawsuit against Moore almost six years ago--and why it is continuing the fight by
ganging up on one of its own graduates, who happens to be one of the most beloved artists in state history.

We've presented voluminous evidence that the University of Alabama System is run these days by a bunch of blockheads. And the Daniel Moore case is an ongoing example of cluelessness on the loose in higher education.

At first glance, the fact that 27 other universities would join Alabama's fight, seems impressive. But Moore points out in a press release that even that is not what it seems. It turns out that the schools have a common licensing affiliation:

Recently, 27 other schools have petitioned the court to jointly file a single amicus brief in support of the University's position, asserting that Propst erred by noting that the University's crimson and white colors make for a weak trademark.

Recent news reports have noted that Mississippi State is not among the "amici" schools siding with UA. Moore suggests that Collegiate Licensing Company ("CLC"), UA's licensing agent and that CLC, or its lawyers, are most likely the ones who rounded up the newly-joined 27 universities. Mississippi State is not one of the 160 schools represented by CLC. Each one of the 27 schools is a client of CLC. There are 133 other schools that CLC also represents, plus numerous other schools across the nation not represented by CLC, who did not side with UA.

Why did the vast majority of CLC schools decide not to join Alabama's battle? Moore has some thoughts on that issue:

"It makes you wonder how it is that they only got 17% of CLC's client base to sign on," Moore suggested. "It would stand to reason that the vast majority of CLC's schools just don't see enough merit in the University of Alabama's lawsuit to justify having their names attached to something that amounts to an attack upon every citizen's First Amendment right of free speech and expression. It can't be that the CLC attorneys focused only on those schools in the 11th Circuit because most of the 27 fall outside of the 11th Circuit's territory. I think anyone can easily figure out that CLC stands to make money from each of their 160 schools through the licensing and control of artwork and has much more to gain from licensing artwork in the long run than does the University of Alabama."

And then we have this piece of information, which should alarm all Alabama taxpayers:

Moore said that according to CLC's contract with the University, if CLC insisted that the University file a trademark infringement suit against anyone, then the school would be forced to comply. And, there is testimony in the case records that confirms CLC has helped fund the lawsuit. Joe Espy, past President Pro Tem of the University of Alabama Board of Trustees, confirmed under oath that the University's legal fees are being paid with public money.

What's at the heart of the University of Alabama's argument. Here is how we summed it up in a previous post:

UA contended that Moore's paintings violated trademark law because they included football uniforms with the university's distinctive crimson and white colors. We're not making this up, folks. The University of Alabama actually claimed that Moore's paintings--of a public event--violated trademark law because they included accurate depictions of football uniforms.

What would it mean to the public if a court sided with Alabama in the Moore case? For one, it would set the stage for turning the publishing industry upside down. Ed Mullins and Jim Stovall, two former University of Alabama journalism professors, recognized the powerful issues at hand. In a 2002 letter to Moore, Stovall wrote:

"I believe that you should have as much freedom to do what you do as any photojournalist. That is to say, a photojournalist will attend a football game, shoot pictures and run them in a newspaper—which is then sold to the public. The University does not make a claim against the newspaper because it has run pictures of the University's football team. You paint pictures, have them printed and then sell them to the public. What makes you different from the newspaper? Nothing that I can discern.

"To my mind, the University is attempting to exercise a power that it does not have, based on a claim that cannot be upheld. If such a claim were upheld by the courts, it would cause serious damage to the free expression that the First Amendment is supposed to protect."

I'm waiting to see how long it takes The Sons of Confederate Veterans or League of the South to file a similar suit against that guy who does the Civil War paintings.

And when it comes to the Sons of Confederate Veterans, League of the South & the folks who run The University of Alabama, we are probably talking about the same people. Isn't Dr. Michael Hill a retired professor of history at UA in Tuscaloosa? All of these neoConfederate assholes seem to be using a revolving door with the University of Alabama System at the center as the "Axis" all the glass doors revolve around.

It is absolute lunacy for this arrogant University to be filing this suit. I feel Danny should ask for his legal fees to be covered by the university officials personally who filed this frivilous crap. I honestly wish that we could swap our law school for Auburn's economic department (the Ludwig von Mises Institute); which is more about reality instead of this political crap.
If anyone wants to do a story about how my family lost a perfectly healthy bank because of corruption in Montgomery (which we'd been in for eight decades btw...), get with Danny and he'll send a message to me. We were asked for a $50K BRIBE from one attorney who had been recommended by an official at the banking department. I can just about write a novel about such corruption-- where lawyers stole documents out of our vault and a judge (who has since committed suicide) wouldn't hold them accountable and awarded them $650,000 in fees (kickback?). And what about that man who committed a FELONY and won a $1.8MM verdict-- and the Supreme Court refused to even give an opinion? I only live in Alabama because my elderly parents are here, but I HATE the people who run this state.
(Note to any Muslim who wants his 72 virgins early...the Alabama School of Law is a great place to have your party. YES I said that and I MEAN IT)!!

Might want to keep on eye on folks who comment like the bloke above. He just advocated killing a lot of folks with suicide bombing. That's offensive on about every level I can think of. It advocates the killing of hundreds of innocent people. It stereotypes muslims. Is that what you want on your blog?

I would also double check whether your role as comment moderator could put you on the hook for what he said. That's not the kind of thing to mess around with.

TR: I agree that the comment comes close to the line. But I disagree that the commenter is advocating something or trying to denigrate Muslims. I think he's using an example in an effort to illustrate his frustrations with the legal system. It's not the best illustration he could have come up with, but I let it go--mainly because I think the rest of the comment makes some points that are worth considering.

I see your point, but to my knowledge, I don't have the technical ability through Blogger to edit out certain parts of a comment. I think it's an all or nothing system--you allow all of the comment or none of it--and I was reluctant to kick out the entire comment.

Makes sense. I disagree with you (I think the comment crosses the line), but this is your party and I'm happy to abide your decisions.

Thanks for engaging in the discussion with me.

TR: No problem. Thanks for bringing it up.

For better or worse, I can feel the commenter's pain. I've probably been so frustrated with the justice system that I either said something I didn't mean or had something come out in a way that I didn't intend.

I feel that my family has been under attack because of the justice system. And my impression is that the commenter has similar feelings. I know how painful that experience can be.