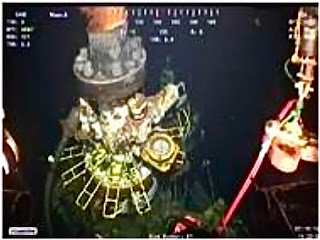 We already have noted the irony of Christian groups calling for prayer to help resolve the BP oil spill. After all, Christian groups tend to vote Republican these days, and it was a Republican administration--led by George W. Bush and Dick Cheney--that pushed for the lax regulation that led to disaster in the Gulf of Mexico.

With hopes that a cap might get the leak under control, irony seems to have become overwhelming--especially here in Alabama, where oil has been present on or near our beaches for weeks.

A group gathered in Mobile on Sunday for a dawn service that was part of the National Day of Prayer for the Gulf. And guess who it included? The man who probably has done more than anyone in history to harm Alabama at the behest of Big Oil.

In doing so, Parker and his GOP buddies violated fundamental procedural law and ignored decades of case-law precedent.

That's how badly Parker & Co. wanted to screw Alabama citizens on behalf of Big Oil. But there was Parker at yesterday's prayer service, calling on the Almighty for relief. Reports the Mobile Press-Register:

I wonder if anyone at the prayer gathering even thought about Parker's breath-taking hypocrisy. Parker probably made an appearance because he's up for re-election in November, with Democrat Mac Parsons gunning for his seat.

Here at Legal Schnauzer, we're all for the power of prayer--when times are troubled or when times are good. In fact, we've become quite fond of imprecatory prayer--the theological term for praying that bad things happen to bad people. Mrs. Schnauzer and I have suffered great harm in recent years at the hands of bad people--they have helped cheat both of us out of our jobs--so imprecatory prayer has become a favorite in our household.

If you happen to hear about a busload of certain people driving over a cliff, you will know that we prayed for it.

On a more serious note, experience has taught us that prayer doesn't do much good when you turn around and make stupid decisions--like electing Tom Parker, and his Republican mates, to the Alabama Supreme Court.

It will be interesting to see if the BP oil spill helps Alabamians begin to wise up in November. We aren't holding our breath.
Posted by legalschnauzer at 10:52:00 AM

Yes Lord, blow all the oil in the other direction down where all those dirty Brown Socialist people live, especially Cuba & Venezuela, so we can take over their countries again and build casinos where all of us Rich White Folks can go gamble, drink alcohol and shack up with those pretty Latina ladies out of sight and out of mind of the good people we go play church with.