A State Actually Takes Judicial Ethics Seriously--And It's Not Alabama 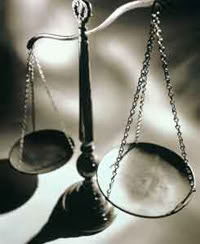 Based on our experience, judges violate ethical standards all of the time. It's routine for judges to improperly help their friends, strong arm certain parties or lawyers, exhibit unprofessional conduct, and generally treat the law like a personal plaything.

So imagine our amazement when discovering that a state judge in Nebraska has been removed from the bench for the kind of misconduct that is tolerated, even condoned, in Alabama and many other states.

The Nebraska Supreme Court removed Lincoln County Judge Kent Florom from the bench for violations of ethical standards. Florom is appealing the ruling.

How did Florom get into hot water? Reports the North Platte Bulletin:

Florom, who has served 19 years as a judge, was removed for violating ethical standards required of judges in Nebraska. Florom was accused of improperly involving himself in the case of Sharon Kramer, a North Platte teacher and North Platte Sensations softball coach convicted of stealing money from the high school booster club concession stand. Florom helped coach the team.

Then, came this paragraph that made our jaw drop:

In its decision, the Supreme Court said a judge should not allow family, social, political, or other relationships to influence the judge’s judicial conduct or judgment.

The Supreme Court also said Florom “abused his judicial position to interfere in two different cases, over the course of several months, for entirely personal reasons.”

The Alabama Canons of Judicial Ethics have similar language about a judge not allowing outside factors to influence his judgment. But do you think anyone takes that seriously? Don't make me laugh.

In Nebraska, people apparently don't have much to do in between Cornhusker football seasons. So they keep judges on their toes by taking judicial ethics seriously. Kind of makes the prairie seem sort of appealing--if it didn't get so darned cold in the winter.

Joiner had better thank his lucky stars he doesn't sit on the bench in Nebraska. He would wind up as a greeter at Wal-Mart. And it probably gets cold standing in the doorway of Nebraska Wal-Marts.

Misconduct is not limited to state courthouses, of course. Consider what we have reported about federal judges, such as Mark Fuller in Alabama and Henry Wingate in Mississippi. They are largely responsible for multiple individuals going to federal prison for "crimes" they did not commit--in the Don Siegelman and Paul Minor cases. And yet, Fuller and Wingate continue to serve, and it appears that they have not been investigated.

Heck, I see no indication that the state judge in Nebraska even made an unlawful ruling from the bench. He apparently acted in a heavy-handed, clod-headed manner, but there is no sign that he violated the fundamental oath of a judge--to rule according to the law. And he still got canned.

I've filed complaints with the Alabama Judicial Inquiry Commission, offering irrefutable evidence that judges had intentionally and repeatedly ruled unlawfully from the bench. My charges were never investigated. I doubt that they were even read.

The Nebraska Supreme Court sure as heck did not ignore allegations against Florom:

The court said Florom used his judicial power to bully attorneys and “not only threatened members of the bar with abuse of judicial power, but repeated his threat, after ample time for reflection, and after having been dissuaded from doing so by the good advice of a fellow judge.”

“There is no excuse for (Florom’s) conduct, and it is hard to imagine conduct that, coming from a judge, could be more damaging to the reputation of the judiciary,” the decision said.

It's hard to imagine conduct that . . . could be more damaging to the reputation of the judiciary? Are you kidding me? Try coming to Alabama, and I'll give you a tour of courtrooms where judges routinely rule unlawfully--and act as if they are proud of it. That's because they know they will suffer no consequences.

Our point is not to defend Judge Florom. Under a strict interpretation of judicial canons, he probably deserves what he got. But talk about unequal application of ethical standards.

Compared to what I've seen in Alabama courtrooms--and read about in other states--the Nebraska judge sounds like a paragon of virtue.

Moral of the story? If you are going to be a corrupt judge--and there are a whole lot of them--don't ply your sleazy trade in Nebraska. The Cornhuskers will make you pay.
Posted by legalschnauzer at 11:20:00 AM

Great post Schnauzer!
Maybe you should send a condensed copy to the Shelby County Reporter...seriously.
That would make one hell of Letter to the Editor. Shelby County is catching some hell that is richly deserved from a few sources at present.

I agree with MaxShelby Roger! And better yet, If Joiner was in Nebraska he could be flipping burgers at Mcdonald's!