Despite the BP Disaster, Big Oil Has Its Eye on the Arctic Ocean 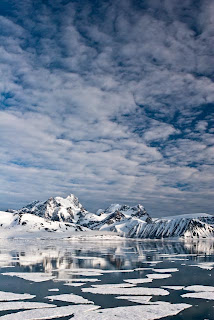 With an environmental catastrophe evolving in the Gulf of Mexico, you might think big-oil companies would be restrained in their thinking about future exploration. You also might think that the Obama administration would be hyper vigilant about any future oil drilling in vulnerable ecosystems.

According to a new report in Rolling Stone, you would be wrong--on both counts.

Believe or not, Rolling Stone reports, BP could start drilling in the Arctic Ocean this fall, certainly in 2011. While President Barack Obama is taking a tough-guy approach with big oil at the moment, experts do not expect it to last:

Indeed, top environmentalists warn, the suspension of drilling appears to be little more than a stalling tactic designed to let public anger over BP's spill subside before giving Big Oil the go-ahead to drill in an area that has long been off-limits: the Arctic Ocean. The administration has approved plans by both BP and Shell Oil to drill a total of 11 exploratory wells in the Chukchi and Beaufort Seas above Alaska—waters far more remote and hostile than the Gulf. Shell's operations could proceed as soon as the president's suspension expires in January. And thanks to an odd twist in its rig design, BP's drilling in the Arctic is on track to get the green light as soon as this fall.

Key members of the Obama administration have been gung ho about drilling in the Arctic--and that's because an awful lot of oil is at stake:

Ken Salazar, the Interior secretary whose staff allowed BP to drill in the Gulf based on pro-industry rules cooked up during the Bush years, has made no secret of his determination to push the "frontier" of oil drilling into the Arctic. The region's untapped waters are believed to hold as much as 27 billion barrels of oil—an amount that would rival some of the largest oil fields in the Middle East.

Both BP and Shell Oil have their eyes on the Arctic Ocean. But BP's plans are particularly alarming. BP created an oil rig by building an island--a "glorified mound of gravel," Rolling Stone calls it--that means the operation is not subject to offshore drilling restrictions:

Here's what BP has in store for the Arctic: First, the company will drill two miles beneath its tiny island, which it has christened "Liberty." Then, in an ingenious twist, it will drill sideways for another six to eight miles, until it reaches an offshore reservoir estimated to hold 105 million barrels of oil. This would be the longest "extended reach" well ever attempted, and the effort has required BP to push drilling technology beyond its proven limits.

Should we trust BP with such a high-risk drilling operation? Evidence in the Gulf of Mexico, and elsewhere, provides a clear answer:

BP, a repeat felon subject to record fines for its willful safety violations, calls the project "one of its biggest challenges to date"—an engineering task made even more dangerous by plans to operate year-round in what the company itself admits is "some of the harshest weather on Earth."

Warning signs seem to be everywhere. But the U.S. Minerals Management Service has given its blessing to BP's plans:

The Obama administration has been warned by its own scientists that drilling in the Arctic poses a grave risk to the environment. Last September, the National Oceanic and Atmospheric Administration urged the president to halt future leases in the Arctic, warning that federal regulators operating on Bush-era guidelines had "greatly understated" the risks of drilling. Both industry and government, the scientists added, displayed a "lack of preparedness for Arctic spill responses" and had failed to "fully evaluate the potential impacts of worst-case scenarios."

What challenges come from drilling in the Arctic? Well, they are daunting:

Experts also warn that a spill in the Arctic would be far worse than the disaster currently unfolding in the Gulf, where experienced contractors and relief equipment are close at hand. By contrast, the sites in the Arctic where Shell plans to drill are devilishly remote. The closest Coast Guard station is on Kodiak Island, some 1,000 miles away. The nearest cache of boom to help contain a spill is in Seattle—a distance of 2,000 miles. There are only two small airports in the region, and even if relief supplies could somehow be airlifted to the tundra, there are no industrial ports to offload equipment into the water. Relief equipment can realistically be brought to the region only by boat—and then only seasonally. The Arctic is encased in ice for more than half the year, and even icebreakers can't assure access in the dark of winter.

What is at stake? The Arctic features bountiful marine life, including polar bears, walruses, seals, gray and bowhead whales, and migratory seabirds from every continent but Europe.

Is it possible that we will not learn anything from the disaster in the Gulf? At the moment, it certainly looks that way:

"Drilling in the Arctic should make the hairs stand up on the back of your neck," says Sylvia Earle, the former chief scientist at the National Oceanic and Atmospheric Administration. "There are values there that transcend the value of any fossil fuel we can extract--irreplaceable ecosystems that we don't know how to put together again. There are some places you should not drill, period."

Roger, thanks so much for including pictures in the recent posts. They look great on the news portal - http://connectedfor.com/news.html

Keep up the good work -Rob

We unfortunately will NEVER learn from our mistakes. Greed trumps the environment. My heart goes out to the folks who lost their loved ones on the rig that blew up & also for ALL of the wildlife that is suffering because of the greed & selfishness certain people have.
I can't even begin to explain to people how this has effected me emotionally (& I don't even live down there)
If we don't start to change our habits & choices we are on a downward spiral. jmho.