Prosecutor Who Cleared Bush Officials Has Connections to Misconduct 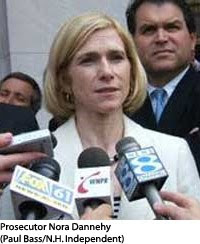 The special prosecutor who last week cleared Bush administration officials of criminal acts in the firings of nine U.S. attorneys was connected to evidence suppression in an earlier case.

Nora Dannehy led a team of lawyers that was found to have suppressed evidence in a major political-corruption case in Connecticut, according to a new report by Andrew Kreig at Nieman Watchdog and OpEd News.

The finding of evidence suppression against Dannehy's team dovetails closely with her appointment as special prosecutor in the U.S. attorney firings case. It also raises questions about a Justice Department investigation into a possible Bush-era coverup on torture.

Kreig, a veteran journalist and lawyer, is executive director of the Washington, D.C.-based Justice Integrity Project. He reports:

But just four days before her appointment, a federal appeals court had ruled that a team of prosecutors led by Dannehy illegally suppressed evidence in a major political corruption case in Connecticut. The prosecutors’ misconduct was so serious that the court vacated seven of the eight convictions in the case.

The evidence-suppression story was covered in the Connecticut press, but it apparently never received scrutiny when Bush Attorney General Michael Mukasey named Dannehy a special prosecutor. Does the public have reason to doubt Dannehy's judgment now that she has found criminal charges were not warranted in the U.S. attorney firings? The Connecticut case indicates the answer is yes. Writes Kreig:

The ruling didn’t cite Dannehy by name, and although it was publicly reported it apparently never came up in the news coverage of her appointment.

But it now calls into question the integrity of her investigation by raising serious concerns about her credibility--and about whether she was particularly vulnerable to political pressure from within the Justice Department.

The DOJ announced on July 21 that it has “closed the case” on the nine unprecedented mid-term firings because Dannehy found no criminal wrongdoing by DOJ or White House officials.

But the official description of her inquiry indicates that she either placed or acceded to constraints on the scope of her probe that restricted it to the firing of just one of the ousted U.S. attorneys, not the others--and not to the conduct of the U.S. attorneys who weren't ousted because they met whatever tests DOJ and the White House created.

“This is an outrageous act of cowardice and cover-up!” former Alabama governor and alleged political prosecution victim Don Siegelman emailed me regarding DOJ’s decision and the failure to interview him.

Given what Kreig has revealed about Dannehy's background, perhaps we should have been expecting such a result all along. Reports Kreig:

Dannehy’s probe, my reporting suggests, was compromised from the beginning.

She was appointed by Bush Attorney General Michael B. Mukasey on Sept. 29, 2008. On Sept. 25, the Second U.S. Circuit Court of Appeals in New York City found misconduct in a 2003 trial she had led.

The court found that the prosecution suppressed evidence that could have benefited the defendant, Connecticut businessman Charles B. Spadoni. Spadoni had been convicted of bribing former state Treasurer Paul Silvester to invest $200 million of state pension money with his firm.

But the appeals court found that prosecutors had failed to turn over to the defense an FBI agent’s notes of a key interview they conducted with Silvester's attorney. In doing so, the court ruled, “the government deprived Spadoni of exculpatory evidence going to the core of its bribery case against him.”

Where does the ongoing torture investigation enter the picture? Kreig provides the answer:

As it happens, the Spadoni case also raises concerns relative to the ongoing federal probe of potential Bush administration wrongdoing in covering up torture that is being led by John H. Durham, another prosecutor from Connecticut. Durham supervised Dannehy’s decade-long prosecution of Spadoni.

He also was appointed by Mukasey in 2008. Durham’s initial charge was to investigate suspected destruction of torture tapes by CIA personnel. In 2009, Holder expanded that probe to other decision-making, including by DOJ personnel.

Until now, neither DOJ nor anyone else has linked Dannehy and Durham by name to the prosecutorial misconduct against Spadoni, as far as I can determine. The court decision doesn’t cite specific actions by the two. But it clearly refers to their case, and the information is readily available online in Lexis and in any good law library.

Have Dannehy and Durham faced any repercussions for their actions in the Spadoni case? That remains unclear:

Prosecutors found by a court to have committed misconduct typically face some sort of internal investigation within the Justice Department. Whether there was any such investigation, and why or why not, is not publicly known.

For now, it appears that compromised special prosecutors were in charge of investigations into both the U.S. attorney firings and possible torture-related coverups. In the case of Dannehy, we know that her investigation was cursory, at best. And that, Kreig says, should give all Americans pause:

Dannehy never contacted obvious witnesses who may have been victimized by wrongdoing. Is there a good reason for that, or is it part of a pattern in which prosecutors tend to find scant wrongdoing against their colleagues? A question reporters need to pursue is whether a culture of error and cover-up prevailed in the Department of Justice under Bush and continues under President Obama. It is one thing to want to look forward, as Obama stated as he took office. But it is wrong and immoral for our criminal system not to examine what appear to be obvious abuses that discredit the justice system, local and regional politics, and, indeed, our nation’s standing in the world as a beacon of democracy and civil rights.

This is consistent with the Bush/Obama pattern of not prosecuting people who are rich or who have connections to the White House.

People who think the Democrats are the antidote to the Republicans need to realize they're two sides of the same corrupt coin. BOTH parties receive the majority of their funding from corporate sources.

The most outrageous example of putting well-connected criminals above the law is the 9/11 "investigation".

The three New York skyscrapers were obviously brought down by explosives. This is obvious to anyone who looks at videos of fires and of controlled demolition.

In addition, military-grade nano-thermite, used in demolition, was found in the rubble of all three buildings.

Yet, the Obama Administration still refuses to conduct a real investigation into this outrageous act of DOMESTIC terrorism.

It's time to dump these corrupt corporate-funded parties, and support the Green Party, which doesn't accept ANY corporate money.

If you continue voting Democratic, YOU ARE PART OF THE PROBLEM!

Whoa now, voting Green all too often equals electing Republicans (see Florida 2000), the most tarnished side of that coin. Green minded people need to show up at their county Democratic Party office and take over.

You have scooped the blogosphere several times....and....your blog is why I return to BUZZFLASH.COM.