GOP Factions Square Off In a Classic Alabama Death Match 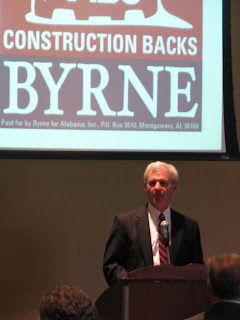 Americans who want to get a measure of the modern Republican Party's soul--assuming it has a soul--will want to check out today's primary runoff election for governor in Alabama.

It's a classic matchup of the GOP's primary factions--The Corporatists vs. The Values Crowd. The outcome might provide a hint about where the Republican Party is headed come November.

Bradley Byrne is the corporate candidate, the hand-picked successor of two-term governor Bob Riley. That means Byrne was plucked straight from the Bush/Rove political tree. Dr. Robert Bentley is the favorite of "values" voters. He's a courtly dermatologist and pro-lifer who has come from nowhere to make a serious race of it. The winner will take on Democrat Ron Sparks in the November general election.

Byrne essentially is Alabama's Haley Barbour, the kind of Republican who has never met a consumer he didn't want to screw. Bentley is Alabama's Mike Huckabee, a guy who appears to mix his religious zeal with a dollop of professional competence.

It's been long assumed, at least in these quarters, that Byrne easily would become Alabama's next governor. But with the economy languishing in a Bush-driven recession, oil gushing in the Gulf of Mexico, and Riley wasting taxpayer dollars on a heavy-handed attack against in-state gambling interests, the pendulum seems to have swung away from the corporate crowd.

No matter what happens today, the fact that Byrne was pushed into a runoff could be seen as a loss for the crony-capitalism crowd. And if Bentley actually pulls off the upset, it would be a giant middle finger in the face for Riley, one of the most loyal and corrupt of all Bushies--a guy who still manages to steer clear of his strong ties to GOP felons Jack Abramoff and Michael Scanlon.

Leave it to Alabama to serve as a perfect laboratory for GOP dysfunction. The governor's race was expected to be between Byrne and the leaders of two other GOP factions--Tim James for the Knuckledraggers (the anti-immigrant, keep "them" in their place crowd) and Roy Moore for the God Squad (those who believe the answers to all of Alabama's problems can be found in the Book of Deuteronomy).

Bentley was expected to finish no better than a distant fourth. His greatest claim to fame was that he had once treated the late Alabama coaching legend Paul "Bear" Bryant. But Bentley seemed to strike a chord with voters when he said that, if elected, he would not accept a salary as governor until Alabama reached full employment.

Bentley also gained traction simply by watching the corporatists self destruct. Byrne says he wants to improve education in Alabama, but he persistently attacks the Alabama Education Association (AEA). Byrne apparently thinks you improve classroom performance by paying teachers minimum wage and ensuring that they have no workplace protections. Byrne also has indicated he will continue Riley's anti-gambling crusade, which has closed facilities around the state and cost thousands of Alabamians their jobs in the worst economy since the Great Depression.

Meanwhile Bentley has quietly stated that he will support AEA when he thinks the organization is right. And while he personally opposes gambling, he would support a statewide referendum on gaming issues.

Byrne supporters, in a sign that they might be worried, have attacked the idea of Democrats crossing over to vote for Bentley in the runoff. Bentley, meanwhile, has said his strongest opposition has come from members of his own party--and he welcomes the support of Democrats.

This already has been a year of stunning electoral upsets for Alabama. In the Democratic primary, Ron Sparks and his populist message won in a landslide over corporatist (and Obama buddy) Artur Davis. Could we be in for another shocker today? One recent poll indicates the answer is yes, showing Bentley with a 20-point lead.

I would be astounded if that came to pass. But the mere fact that Bentley seems to be making a race of it indicates that, even in Alabama, people are growing leery of corporate control over government.

Byrne has raised way more money than Bentley and received endorsements from most of the state's Republicans elites. But we are seeing signs that many Alabamians, and maybe Americans in general, are ready to move beyond the Bush era of crony capitalism. Reports The Gadsden Times:

Bentley cast himself as an outsider within his party and Byrne as the “establishment” GOP candidate. Bentley said as the nominee he will be a unifier.

“When you are for the status quo, all these people are going to endorse you,” Bentley said of Byrne’s heavyweight endorsements. “I’m going to be a governor for not only Republicans, but I’ll be the governor for Democrats.”

Roger: This is one of your best posts.

Conditions are ripe for right wing populists. The political demise of Artur Davis was no fluke. People are livid at the corporatists.

If the full moon doesn't hit the populist candidate, expect an upset.

But, when your community is faced with an environmental issue, you begin to see that any politician, D or R, is far too often in the pocket of big business and not truly for the people.

Vincent is reeling from a controversial quarry issue, that will be placed right on top of our minority residents. That community reached out to Mr. Davis for help on numerous occasions.

The response from the Davis camp via his aides was, "Artur will not be coming to Vincent. He is not going to get involved."

It was heartbreaking for them and they did not understand why he would not stand with them, "his own people" as they said.

They looked into his campaign contribution records and found Drummond Coal and other BARD members were heavy contributors.

And then they found the following:
http://creekkeeper.blogspot.com/search?q=artur+davis

U.S. Rep. Artur Davis says he
sympathizes with both the revenue-starved local officials and the coal industry.
“I am more than sympathetic that the storage of industrial waste is a job source in high unemployment counties like Perry and that the county will benefit from tax revenues generated by this storage,” Davis
says. “I am also mindful that the storage violates no current state or federal law, and that a reclassification of coal ash as
hazardous could pose significant burdens on coal-reliant industries.”

Perry County is receiving the coal ash waste from the Kingston Valley TVA spill, and it has seriously contaminated the nearby minority residents community with mercury and arsenic among other toxins.

Those residents are suffering beyond belief while the state, ADEM and the local government is growing fat from the revenues.

The residents have not prospered from an influx of jobs.

My point is that the environment and environmental justice has long been a leftist issue.

Mr. Davis could have taken a stand on one of the left's platform principles, but chose instead to follow the dirty republican line of seemingly aligning himself with big business philosophy; as long as it makes money the environmental and community effects shouldn't be worried about.

How utterly disappointing. Shame on you Mr. Davis.

Thanks, great site.. your is one of very few blogs worth taking the time to read..