How has Mallinckrodt Pharmaceuticals CEO Mark C. Trudeau found time for Ashley Madison, with all of the controversies swirling around his St. Louis company? 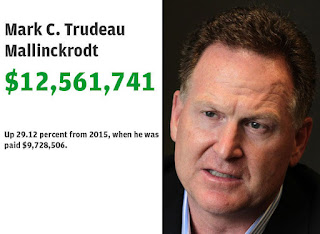 How has Mallinckrodt Pharmaceuticals CEO Mark C. Trudeau found time to fiddle around on Ashley Madison, with all of the contentious issues swirling around his company? Perhaps all things are possible when you are paid $12.6 million a year.

How many headache-inducing issues have crossed Trudeau's desk recently? In January 2017, Mallinckrodt paid $100 million to settle a Federal Trade Commission lawsuit alleging anti-competitive behavior. In December 2016, Mallinckrodt was cited in a U.S. Senate report on price gouging in the prescription-drug industry.

The biggest headache, however, might just be brewing. In February, Mallinckrodt executives were served with subpoenas -- one from the U.S. Securities and Exchange Commission (SEC), the other from the U.S. attorneys office in Massachusetts. The subpoena from Massachusetts apparently involves the company's patient-assistance program. Several other pharmaceutical companies have received similar subpoenas regarding patient assistance, so it's unclear how much trouble that might cause for Mallinckrodt.

The SEC subpoena, however, involves allegations of fraud regarding the sales, profits, promotions, and pricing of Acthar, a pricey drug used in the treatment of lupus, multiple sclerosis, and infantile spasms. That appears to have the makings of a major headache.

How did the fraud allegations arise? It appears they originated with Andrew Left, an activist short seller, author, and editor of the online investment newsletter Citron Research. From an article at Investopedia:

Mallinckrodt (MNK) Chief Executive Officer Mark Trudeau has been accused of fraud by short-seller Andrew Left for allegedly misrepresenting how much Medicare pays for its main drugs.

“Trudeau has been caught red-handed committing securities fraud,” Left, the head of Citron Research, wrote in a November 16 report. “Doctors do not even know if the most expensive drug reimbursed by Medicare, at $162,000 per patient, even works.” Citron Research is a firm that identifies fraud and terminal business models, according to its website.


What about specifics? Left provides them:

Left claimed that Mallinckrodt’s chief misled investors when, during a conference call in October, he said that its H.P. Acthar Gel’s exposure to Medicare is roughly a quarter of the company’s business. It is 61 percent, according to the short-seller’s analysis of the Center for Medicare and Medicaid Services dashboard, which was set up in 2015 to provide detailed information on Medicare spending on prescription drugs. He also alleges that there is no clinical evidence that the gel, which is often prescribed to treat multiple sclerosis relapses and a rare kidney disease, actually works.

A Mallinckrodt representative was not immediately available for comment. But it's not the first time that the head of Citron Research has questioned the company's sales of the drug. Responding to criticism last year, CEO Trudeau said that Left "really put out a whole variety of different speculations and allegations and not very many facts," according to CNBC.


More details can be found at Citron's Nov. 16, 2016 newsletter. Is the report causing discomfort in the investment community? The answer appears to be yes:

After the release of Citron’s research results yesterday, Mallinckrodt shares tumbled 12 percent. Some analysts saw the sell-off as an investing opportunity while others have provided a counter-argument to Left’s allegations which are based on a database that provides data on gross sales.

“We don’t know the exact net sales of Acthar to Medicare/Medicaid,” said Leerink’s Jason Gerberry and Etzer Darout, according to Barron. But they believe that “Acthar net sales would be closer to 38-45% range vs. the 61% figure cited in the short-report.”

They also added that “Acthar Gel is an old product lacking good randomized, controlled data consistent with most products approved in the modern era.”


The pricing of Acthar has been a source of controversy for some time. It might not help that Trudeau's annual compensation shot up 29 percent, to $12.6 million, at about the time price gouging in the drug industry hit the national spotlight:

It’s not the first time that the high price of Mallinckrodt’s Acthar has been called into question. In 2014 a New York Times report said that many experts say there’s insufficient evidence that the gel works better than much cheaper options. “Some in the medical community say the program’s soaring bill for Acthar shows Medicare needs to do more to safeguard taxpayer dollars,” it added.