Dear God, Not A Presidential Poodle!

Another story about the Obama family and the presidential puppy is making the rounds, and it raises some serious political concerns for our staff here at Legal Schnauzer.

The latest piece, by Elizabeth Willse of the Newark Star-Ledger, discusses the challenges a new puppy can present, particularly for a family that is about to move and take on the highest profile position on the planet.
Willse notes the important role Barack and Michelle Obama will play in helping their daughters learn about the responsibilities of having a dog. And the story points out that 10-year-old Malia Obama has asthma and allergy problems, so that will be a consideration in choosing a dog.

Several articles have quoted experts saying that no dog is truly hypoallergenic. But Willse reports that of 158 breeds, 11 are considered hypoallergenic, and more than 42,000 people voted in the American Kennel Club's poll of breeds that met the Obamas' needs.

Now here's the alarming part. Willse reports: "The race hasn't been called yet, but the poodle is pretty far ahead in the polls."

Yikes! I happen to like pretty much all kinds of dogs, pure and mixed, and I've heard nothing but good things about poodles. They apparently are smart, loving, good natured, and suitable for folks of all ages.

But here's the problem: Poodles are, shall we say, effeminate dogs. Some might call them "foo foo" dogs. It's hard to imagine, say, Norman Schwarzkopf owning a poodle. That's just not what a "manly" guy would do, right?

So let's look at the puppy paradigm from a political perspective. What are some of the criticisms Republicans are bound to throw at Obama--or any other Democratic president, for that matter?

That he's "soft" on foreign affairs, "soft" on the military, "soft" on crime. They'll call him an "appeaser" and say he's too "diplomatic."

None of those charges is fair, of course. But what does fairness have to do with anything? To quote that political sage Andre Agassi, "Image is everything." And a poodle would send the message that Barack Obama is not a "manly man," that he's too "soft" and "accommodating" and "appeasing."

With a wife and two daughters, Obama already is going to have a highly feminine White House. So he needs a manly looking dog, even if "he" happens to be a "she."

And I have the perfect solution: a miniature schnauzer.

The mini schnauzer, like the poodle, is among the 11 breeds that are considered good for folks with allergies. But unlike the poodle, the schnauzer is part of the terrier group, which is known for its feistiness.

Heck, Boston University calls its sports teams the "Terriers." So does Wofford University. Have you ever heard of a college football team that calls itself the Poodles?

In fact, the miniature schnauzer is just the terrier we need in the White House. The mini is smart, playful, good-natured, and loving. Many people hear the term "miniature" and think they are getting a lap dog--only to be surprised at how tough and rambunctious the schnauzer can be.

No living being was ever more pleasant to be around than our Murphy (1993-2004), who provides the inspiration for this blog. But as my wife used to say, "Murphy doesn't suffer fools gladly." In other words, treat a schnauzer right, and you've got a friend forever. But don't expect them to take crap off anybody.

That's the image Obama needs to project. And with their bushy eyebrows and distinctive beards, schnauzers look manly--even when they are girls. I can't begin to tell you how many times someone would stop us when we were walking Murphy and say, "He's so cute" or "What's his name?"

In fact, I can't remember anyone ever referring to the Murph as "her," even thought she had all the sweet-natured characteristics you associate with a female dog.

Schnauzers are smart as heck. In fact, Murphy could spell--especially words like L-U-N-C-H and D-I-N-N-E-R. Her favorite place to go in the car was to our nearby Sonic drive-in. She would get so excited when it became clear we were going there, that we started spelling the word in an effort to keep her calm. That only worked for one or two times before she figured out what S-O-N-I-C meant.

Schnauzers, though, project an innate, instinctive kind of intelligence. Republicans already have knocked Obama for being too bookish and cerebral.

A mini schnauzer in the White House would help show the world that Obama has real-world smarts.

Plus, we all would feel a little safer knowing a schnauzer was watching over things at 1600 Pennsylvania Avenue: 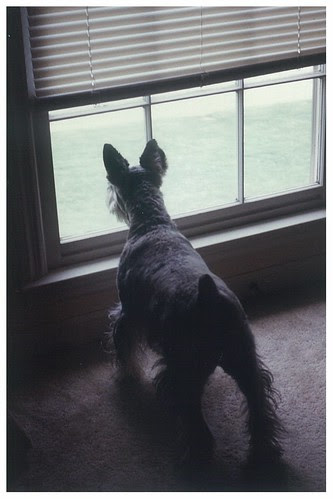 I guess you missed Obama saying they are not going to get a "girly dog".
jim gundlach

Standard poodles are among the top breeds for search and rescue these days because of their intelligence, stamina, and natural athleticism.

Look at my mom's dog, Miles (the brown poodle) and his best friend Chloe (the black labradoodle), and tell me these aren't big rambunctious creatures. :)

Good point, Lindsay. Poodles probably get a bad rap, and I guess I contributed to that. Maybe it's the name. Has kind of a girly sound to it. And a lot of folks cut the small poodles in a very feminine way. Miniature schnauzers have the opposite problem. A lot of folks leave their eyebrows and beards quite long, and that gives them that "little old man" look. We always liked the short beard and eyebrows with the Murph. Thanks for sending the photos. Very handsome dogs.

It's funny, but I'm not sure I've ever seen a standard poodle or standard schnauzer in person. The minis seem much more common, at least around here.