Photograph shows Carol's split lip, likely the result of cop slamming her to the ground, and helps prove deputies are lying about the cause of her broken arm

Prosecutors have been stonewalling for about 12 months on turning over discovery in the pending "assault on a law enforcement officer" case against my wife, Carol. But the dab of discovery we have received tells a lot about what really happened during the unlawful eviction at our duplex apartment on Sept 9, 2015, in Springfield, Missouri. (See here and here.)

Consider the photo at top. It addresses one of Carol's injuries that I have not mentioned here on the blog. And the story behind that injury helps reveal the con game the Greene County Sheriff's Office (GCSO) and prosecutors are playing.

In this photo, taken just before she had X-rays that revealed a comminuted fracture in her left arm, Carol's lower lip is split, bad enough to cause slight bleeding.

How did this injury occur? We're not certain, but near the end of our eviction, Carol briefly got into the passenger seat of our car (with me on the driver's side); we looked at each other, and I do not recall noticing a split lip. Without saying a word, Carol apparently remembered that we needed our cat's litter box, opened the car door, and started toward the front door. After all, she had been told by cops that she could retrieve as many of our personal items as she could handle; I had been told the same thing, but a cop later changed course and said I could not go in.

As Carol approached the front door, officers Debi Wade and Scott Harrison blocked her path. I could hear Carol say "I'm just trying . . . " and I think the remaining words were "get our cat's litter box." I could not hear the rest of the discussion, but Carol was not acting in a threatening manner and never came close to touching either Wade or Harrison. From my vantage point, she simply was trying to convey our need to have our cat's box. Before any resolution could be reached, an officer who remains unknown (15 months after Carol's arrest), came from behind, grabbed Carol and body slammed her viciously, butt first, to the ground.

Wade, in her Probable Cause Statement, claims Carol "barreled" into her "head first" and assaulted her along the sidewalk -- and that is pure fantasy. In fact, it's such an obvious lie that even prosecutors did not bring the charge against Carol. It's the kind of false statement, under oath, that could help put Wade behind bars. Several of her colleagues are in danger of landing in the same place.

I believe Carol was slammed down so violently that she bit her own lip, and that is the injury you see in the photo. As Carol sat stunned on the ground, probably with a concussion, the cop we call "Mr. Blue Shirt" (he wore a blue shirt and reflective sunglasses) yanked on both of her arms in an upward and backward motion that caused Carol's left arm to shatter, just above the elbow.

Sheriff Jim Arnott, standing about five feet away, pointed at the victim of grotesque police brutality and said, "She assaulted a police officer." Arnott's words created the phony "cover charge" (to cover for civil liability) Carol has been fighting for 15 months.

In incident reports, cops have hinted that Carol must have broken her own arm by flailing about in the back seat of a patrol car. That's loopy for several reasons: (1) Carol was restrained by handcuffs and seat belt while in the patrol car; (2) A comminuted fracture is a severe injury, generally caused by trauma. Any suggestion that someone could produce such an injury to herself is laughable; (3) Carol's arm was broken when she was slammed to the ground and "Mr. Blue Shirt" violently yanked on her limbs; I saw it happen, so did Arnott and several of his officers, and it likely was caught on dash-cam video that the prosecution in Carol's criminal case has refused to turn over; (4) The photo above suggests Carol was, in fact, slammed to the ground.

That brings us to a key point that proves the bogus nature of the criminal charge against Carol. In fact, lie-filled police documents confirm this point. 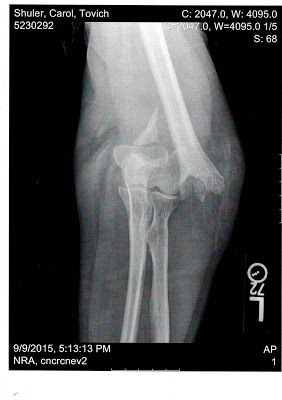 Carol is charged with "pushing" Officer Jeremy Lynn as he burst through the front door of our duplex apartment for an eviction that was unlawful in more than 10 ways -- even though Lynn admits in his written report that he grabbed Carol, initiating contact with her, not the other way around.

If Carol had committed a crime, you might expect her to be arrested at that moment. But that didn't happen. As even the cop reports indicate, we both were taken outside and sat on the grass for a period of time before Carol was allowed to go inside and retrieve as many personal items as she could carry. This all took about 30 minutes, and never did any of the 6-8 deputies on scene indicate Carol had committed a crime or was under arrest.

That came when Carol was slammed to the ground, and her arm broken, with Arnott's finger pointing being the first sign that Carol -- the victim of an assault -- was being charged with a crime.

What does this tell us? I can think of two key points:

(1) The cops' own actions -- letting 30 minutes or more go by without making any move to arrest Carol or making any verbal statement indicating she had committed a crime -- suggest she did not "assault" Jeremy Lynn. That idea only came to someone's depraved mind after X-rays showed the cops had broken Carol's arm.

(2) Even if you buy the cop's version of events -- and only a cop would do that -- the two incidents are not connected. The alleged push of Jeremy Lynn happened at the beginning of the eviction, and Carol was not arrested until about 30 minutes later, after allegedly barreling into Debi Wade (even though prosecutors don't buy that tall tale and did not bring the charge against Carol). In the cops' own words, there is no connection between the alleged push of Jeremy Lynn and Carol's arrest. (Cop documents are embedded at the end of this post.)

The truth -- and the photo above helps show this -- Carol was charged with a crime because she was the victim of police brutality. Police reports say nothing about "Mr. Blue Shirt" slamming Carol to the ground, but her split lip is evidence that is what happened.

Jim Arnott saw it from a few feet away and knew in an instant that his department was likely to face major civil liability -- and it had better start developing an alternative version of reality, in a hurry.