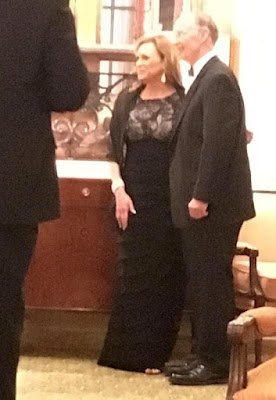 Who is the happy couple in the photograph above? Why, it's Alabama Governor Robert Bentley and former advisor Rebekah Caldwell Mason, looking dapper during a formal ball at the Willard Intercontinental Hotel in Washington, D.C.

The photo, which was taken in February 2016, comes courtesy of Birmingham attorney and citizen journalist Donald Watkins, who features it on his Facebook page.

Let's see . . . we know that Bentley stated in late December 2015 that "rumors" of an extramarital affair were "untrue." But this photo, taken roughly two months later, has the couple looking awfully cozy together. Writes Watkins, under the headline "High-flying Robert Bentley Balling With Rebekah Mason":

Governor Robert Bentley and his lover, Rebekah Mason, were balling in February 2016 at the Willard Intercontinental Hotel in Washington, where Bentley was attending a meeting of governors. This power couple rocked the place, all courtesy of tax dollars and campaign funds. This is how a governor can live large on ota people's money.

As [Bentley] walked down the center aisle of the Old House Chamber after delivering the State of the State address, Mrs. Mason was by his side. When he was photographed at a swanky Washington, D.C., gala typically reserved for only governors and first ladies, she was his date. And when any meeting in the Capitol was concluded, she was always the last one left in the room with him.


On a side note, Yellowhammer publisher Cliff Sims could not resist taking a shot at the reporters--Watkins and me--who broke the Bentley/Mason story last summer. Get this from Sims:

Mrs. Mason expressed appreciation last year when Yellowhammer criticized other media outlets for publishing tabloid-style stories on the affair rumors, which at the time were unsubstantiated. I told her at the time that I thought the coverage by other outlets had been unethical. I still believe it was.


It's unethical to print articles, based on multiple solid sources, which prove to be absolutely true six months later? On what planet does Cliff Sims live? His criticism proved unfounded, didn't it? Has Cliff Sims issued a public apology? Oh, wait, he's a conservative, and Jesus doesn't require them to apologize for anything.

According to multiple reports, Planet Sims is a place where the YH publisher serves as a mouthpiece for GOP power brokers like House Speaker Mike Hubbard (R-Auburn) and "consultant" Dax Swatek. Given that Hubbard is under a 23-count indictment for alleged violations of state ethics law, is Cliff Sims in a position to be questioning anyone's ethics? Is Sims a journalist or a political hack?

Perhaps the best, and most entertaining, answers to those questions can be found at "Don't Get Yellowhammered (A Cliff Sims story)" at the Sweet Home Politics blog. From writer West Honeycutt:

Political insiders in Montgomery have long questioned Sims’ rise to success, his source of funding, his uncanny ability to receive news before it actually breaks and his political motive.

“It has been known for sometime and is beyond speculation that the Yellowhammer blog run by Cliff Sims is nothing more than a mouthpiece for the Speaker and those in his inner circle. And I don’t know anyone who would claim otherwise…,” said a Montgomery insider and lobbyist.


Yellowhammer deserves credit for contributing to the public's understanding of the Bentley affair. But Cliff Sims is tossing around "unethical" allegations toward those who first brought the story to public attention? He's in no position to be questioning anyone's ethics. Readers should know that Sims' reporting on the Bentley story likely is driven by political considerations.
Posted by legalschnauzer at 12:19:00 PM

This is a classic. Hope it gets plastered all over the Web.

Yellowhammer must figure there is some advantage to Hubbard if Bentley goes down.

That's a nice view of the boobs that made Bentley blubber.

Bentley's handlers have done a terrible job. I really don't get it or probably ever will, but didn't anyone ever voice concern for Bentley as well as his family. He could very well be in major trouble.

Oh yeah I forgot about Yellow hammer and guys like Hobert. I bet these guys never missed a paycheck, and have all there basic needs being met. We can also thank these fine folks in mainstream for holding up the reporting process. Our journalist here was forced to defend himself for years. I'm sure Roger's got plenty to write about but not the time because of all the trouble he's had to deal with.

Cliff Sims is just butt-hurt that you and Watkins beat his ass on the Bentley story.

RCM does look mighty fine. She's got terrible taste in men and politics, but she cuts quite a figure in that dress.

If I have to pick a conservative skank, I'm going with RCM every time.

The guy who really looks bad is Rob Riley. Liberty Duke? That's shopping in the low-rent part of town!

It all goes back to the First Lady's chief of staff, connect the dots Roger. You're the master of conspiracies

Al.com has been upstaged by schnauzer, Watkins and Ripp. All hail the mighty web press.

Yup! That's why the politicians call such women " Political Aids " and that one in particular can say, she has driven a vintage Bentley, to boot while in service!