My family's efforts to have my wife and me declared wards of the state in Missouri is dismissed, leaving a possible trail to Robert Bentley sex scandal in Alabama 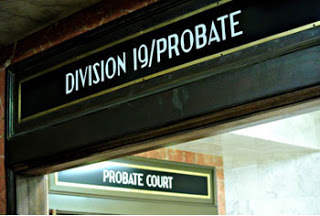 My family's legal case, attempting to have my wife, Carol, and me declared "disabled and incapacitated" under Missouri law, has been dismissed. The case, which sought to have a guardian, conservator (or both) appointed for us in probate court, was absurd from the outset. It could essentially have made us wards of the state, but we never came close to fitting the definition of "incapacitated," under the law.

Why did my family ask to have the case dismissed? I'm not sure, but the timing dovetails curiously with events in the Alabama sex scandal involving Gov. Robert Bentley and former advisor Rebekah Caldwell Mason. We already have seen signs of a possible Alabama connection to our unlawful eviction that left Carol with a shattered left arm. Dismissal of the incapacitation case, in my view, adds to the possibility of an Alabama connection to the abuse we've suffered in Missouri. (By the way, not a single member of my family has asked about Carol's well-being or expressed any sorrow/regret for what Greene County sheriff's deputies did to her. For that matter, they've expressed no concern about my well being either.)

The incapacitation petition, filed by my brother Paul, is filled with false information and deals with issues about which he has zero knowledge--given that he has spent about three hours with us over the past 24 years or so. In Paul's defense, he is a radiology technologist at Mercy Hospital in Springfield, and I feel certain my lawyer brother, David, was the driving force behind this con game. Paul, I guess, was a willing guinea pig, but I have no idea why someone felt the need to put his name on a document where he testified falsely under oath (under penalty of perjury) on matters he knew nothing about.

Dan Menzie, our court-appointed attorney, said Paul's lawyer (Linda K. Thomas) filed a Motion to Dismiss the case--and that was that. I occasionally have troll commenters here claim I've never won a legal case. Well, they can't say that anymore; I won this one, with the other party essentially throwing in the towel and admitting he never had a case. (See judgments at the end of this post.)

The court ordered that Menzie be paid $600 for his trouble, half from a court fund and half from Paul. When I last talked with Menzie, he had not received the money my brother owes him. And Paul thinks Carol and I have trouble keeping up with our finances? Sounds like he isn't so great at it either.

What about damages for Carol and me? We've essentially had our reputations trashed, with documents appearing both online and in printed form indicating (more or less) that we aren't capable of wiping drool off our chins. Those documents will remain in the public sphere forever, I guess, if we don't try to do something about it.

Have Carol and I been damaged? Well, my brother's petition about me claimed that I, as respondent:

* "Lacks capacity to meet essential daily living requirements for food, clothing, shelter, safety or other care such that serious physical injury, illness or disease is likely to occur . . . "

* "Lacks ability to manage his financial resources without supervision . . . "

The petition also claims that I am homeless, although Carol and I never have been homeless. Yes, Carol and I have had our jobs, our careers, and our home of 25 years stolen from us. We've been diagnosed with PTSD, our living circumstances are not good, and we could use help in a number of areas. But we have not been homeless, and we've never shown any sign that we can't take care of ourselves.

This blog alone, which broke one of the biggest Alabama political stories of the past 10 years and has been named one of the top 50 law blogs in North America, is evidence that I'm hardly incapacitated--and neither is Carol.

Do we intend to seek damages for having our reputations smeared? We are considering that possibility.

What about that curious timing regarding the Bentley/Mason scandal in Alabama? Consider this timeline:

March 23, 2016--Audio surfaces that confirms the Bentley/Mason affair, which I broke last August here at Legal Schnauzer, just nine days before our eviction;

March 28, 2016--Reports surface that Bentley pressured law enforcement to use criminal databases in order to gather dirt on me and fellow citizen journalist (and lawyer) Donald Watkins;

What was my family really hoping to achieve with this charade from the outset? Well, the petition was filed on September 29, 2015, exactly 20 days after Carol and I were unlawfully evicted from an apartment in Springfield, and a Greene County deputy brutalized Carol to the point that her left arm was shattered. I suspect the "incapacitation" lawsuit was some sort of lame response to the fact law enforcement, a landlord, and several lawyers screwed up big time in our eviction case.

On the positive side, the incapacitation case did turn up one piece of fascinating health-care information--and it produced irony that I doubt my family even is capable of comprehending. Both strongly suggest that they are more interested in harming Carol and me, than they are in helping.

Sounds like a Doctor connection between Bentley and the medical cabal found its way to the local medical technologist and then to the lawyer cabal. Glad that part is over for you,

Interesting theory, @10:40. I hadn't thought about the "doctor connection" playing a possible role. But some strange stuff showed up in my medical records, and I will be writing about that shortly.

How does it feel to have your own brothers stab you in the back?

Not too good, @11:03, but I would say the back stabbing started 26 years ago when Carol and I got married. Have no idea why it started--given that I thought I had grown up in a wonderful family. But it doesn't seem so wonderful now. Guess I should be used to the back stabbing at this point.

The same people that destroyed your life and reputation are the same people that tell you to suck it up and move on with your life. People do conspire against you. Yes it happens. That goes out to you Robert Holbert, Marie Claire, family members and the list goes on and yes this does happen. Readers should demand a retraction. The hell Roger's family has been through has been incredible. Remember, Roger the truth never changes.

Very insightful comment, @11:09. Can't tell you how many people Carol and I have had tell us to "suck it up and move on." Another favorite is "hit the reset button."

Kind of hard to hit the reset button when almost everything you ever worked for has been stolen and your professional and personal reputation has been ruined, and you are left with a condition (PTSD) that can be debilitating--and your enemies have proven they can cheat you out of a job at any moment.

I told someone I thought was a friend that Carol and were going to pursue justice come hell or high water, and he actually said, "The system doesn't work that way." The same guy said the law is whatever judges want it to be, that the written law essentially means nothing. And this is a guy with a doctoral degree. By the way, the same guy said it was our fault (my fault, I guess) that deputies broke Carol's arm.

This guy and his wife both have pursued possible legal claims when they felt they had been wronged--as they should have. But Carol and I aren't supposed to do that. The system works for them, but not for us.

I really should write a book about some of the worthless crap seemingly intelligent people have said to us. It's astounding. Quite a bit of it has come from so-called "friends" and blood relatives.

Sounds like both of your brothers need their asses kicked. I would be glad to volunteer for that duty.

Your brothers, and this "friend," are practicing classic "Blaming the Victim" mentality.

If someone steals most of your belongings and your home . . . well, you lack the capacity to perform essential daily functions.

If someone ruins your career and steals most of your money . . . well, you need supervision with your finances.

These people are covering for the ones who really did you harm, who put you and Carol in this bad position. They should be ashamed of themselves. But I doubt they are capable of feeling shame.

What kind of law does your brother practice in Springfield, Missouri?

Divorce, mostly. I think there is some DUI defense in there, too. My understanding is that he tried his hand at criminal defense and wound up in the midst of a big legal malpractice case. That might have cured him from dabbling in that area. Not sure, though.

This present governor scandal has validated your blog. It has given you back any credibility you may have lost. As far as your brothers are concerned the question is, what did they have to gain? People don't do things like this for no reason. Who was going to be your guardian? The state? Or one of them? And if you were up to any family inheritance, who would control it? These personal questions are not expected to be answered, but only considered by you and your readers.

Happy to read the case was dismissed, It was most unfortunate your family took this action. On the other hand, being a long time reader of the blog, it did give me a good laugh, like where were their heads at, thinking they could have you and Carole declared wards of the state. it is just beyond me.

Now if the family wants to talk crazy, I nominate your brothers.

You can't choose your family, only your friends.

Your blog has continually demonstrated that you are sane, literate, and a good investigative reporter, who has great survival skills. May you and Carol have many happy years together.

e.a.f. people still use the insanity commitment card in divorces and family matters in this country. Just pray there are honest psychological evaluation people and physicians who can't be bought off. That "mental illness" understanding issue started sensationalizing hot in the 1960-70's when all the drugs were everywhere. "Insanity" and massive psychotherapy bills were everywhere too. It all comes down to money and/or discrediting and controlling people. Roger's proven he's going to stand on his word. Few have the courage when challenged by state or local authorities. He's lucky to have had Carol by his side. Bravo!

The "doctor connection" does certainly raise some interesting questions, as well as the entire timing of the case and the governor. It just seems to me that there are too many coincidences happening around your case, and that you should not get frustrated by the results but show them that you are going to fight until you have no more fight in you.

Our deepest sympathies to your pain and suffering. We realize that you’re seethed about what happened and we understand that. However, you only state that you and your wife had an altercation of some sort with the sherriffs without saying anything about what happened. I’d suggest that you do more to understand where your family may be coming from on this.

You must be new to my blog. I've written probably two dozen posts that say exactly what happened. You can go to the search box at the top of the blog and key in "eviction" or "Arnott," and it should call up all (or most) of them. Plus, I recently wrote an article that included written evidence of my brother's involvement. I understand exactly where my family is coming from.