The truth takes a beating in social-media posts about Jacob Blake, the paralyzed victim of a police shooting that sparked protests in Kenosha, Wisconsin 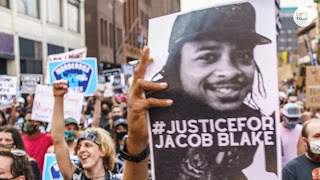 Social media is proving to be a poor source of information about Jacob Blake, the victim of a police shooting in Kenosha, Wisconsin, according to a report at factcheck.org. Let's start with perhaps the biggest whopper making the rounds:

Posts on social media falsely claim that the man shot by police in Kenosha, Wisconsin, “wouldn’t have been shot if he was still in prison for raping the 14 year old.” There’s no evidence he was ever charged with such a crime — let alone convicted and imprisoned. Jacob Blake was charged in July with sexually assaulting an adult woman, but has not been convicted.


From there, the truth takes a serious pummeling online:

The Aug. 23 shooting of Jacob Blake by police in Kenosha, Wisconsin, set off protests against police brutality in the city — as well as distorted and unfounded claims on social media.

One viral claim on Facebook targets Blake, who his family’s attorney says was paralyzed by the shooting, by altering the known facts about criminal charges against him. Specifically, the claim falsely suggests that he served time in prison for “raping the 14 year old.”

“Jacob Blake is shot by police while resisting arrest,” a meme repeatedly shared on Facebook — in one example by 11,000 users — claims. “He wouldn’t have been shot if he was still in prison for raping the 14 year old.”

The posts offer no evidence for the claim, and the allegation doesn’t comport with publicly available records.

Blake, 29, was in fact charged in a domestic abuse case in July with third-degree sexual assault, Wisconsin court records show. The state statute cited does not specify that the charge relates to sexually assaulting a minor. He was also charged with trespassing and disorderly conduct; he has not been convicted, let alone imprisoned. There was an active arrest warrant for Blake on those charges, which police officers were reportedly alerted to prior to the shooting.

A criminal complaint shows that the charges relate to an incident with an adult woman; FactCheck.org is not providing other details about the victim because of the nature of the alleged crime.


Is Blake a model citizen when cops aren't shooting him in the back seven times, with four shots hitting him? Probably not. But is he being portrayed fairly and accurately on social media? Nope:

The actual charges, while no doubt serious, are therefore not proof that Blake “wouldn’t have been shot if he was still in prison for raping the 14 year old.”

We could find no other evidence to support that claim. Wisconsin’s Sex Offender Registry offers no matches for his name. Other cases in Wisconsin’s court records include a traffic violation and the custody disputes.

Ironically, the meme spreading the claim uses an image of John Krasinski, an actor from the TV show “The Office” who has expressed support for the Black Lives Matter movement.

The falsehood is swirling as many of the details about the shooting are still unclear.

Bystander video appears to show that police officers were involved in a scuffle with Blake before he walked away and around an SUV, as officers trailed him, guns drawn. The video shows that, after Blake opened the car door, an officer, grabbing Blake by his shirt, fired several rounds into Blake’s back.

The officer who shot Blake has been identified by state officials as Rusten Sheskey, an officer for seven years. He and two other involved officers at the scene have been placed on administrative leave, Chief Dan Miskins has said (43:50).

Blake remains hospitalized and an attorney representing his family, Ben Crump, said in a press conference that the “medical diagnosis right now is that he is paralyzed” and that it would “take a miracle for Jacob Blake Jr. to ever walk again.”


Investigations are ongoing in the Blake shooting. From FactCheck:

The state DOJ said in an Aug. 26 press release that Kenosha police officers were responding to a call from a woman reporting that “her boyfriend was present and was not supposed to be on the premises.” The Washington Post quoted a neighbor as saying Blake was attending a birthday party for one of his children when an argument between two women spurred the call to police.

Police were attempting to arrest Blake and unsuccessfully attempted to taser him, the state DOJ said. “Mr. Blake walked around his vehicle, opened the driver’s side door, and leaned forward. While holding onto Mr. Blake’s shirt, Officer Rusten Sheskey fired his service weapon 7 times. Officer Sheskey fired the weapon into Mr. Blake’s back,” it said.

The state DOJ further said Blake “admitted that he had a knife in his possession” and that investigators “recovered a knife from the driver’s side floorboard of Mr. Blake’s vehicle. A search of the vehicle located no additional weapons.”

It’s unclear if Blake was carrying the knife prior to the shooting, though. The Kenosha police do not wear body cameras.

In the days since the shooting, Kenosha has erupted in protests — including one on Aug. 25 that turned deadly after a 17-year-old gunman shot and killed two protesters, injuring a third.