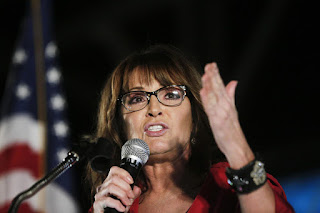 Are you more likely to get a fair shake in federal court if you are a celebrity politician of the conservative variety? Recent news reports suggest the answer is yes. Do federal courts apply the law evenly and fairly across different regions of the country? The same news reports suggest the answer is no.
Those seem to be the two take-home lessons from the latest news on Sarah Palin's defamation lawsuit against The New York Times. The bottom line: Sarah Palin's rights matter more than the identical rights of an everyday American.

Who is the specific everyday American in this instance? It's me, your humble blogger. Am I unhappy about Sarah Palin's rights being upheld while my rights -- the exact same ones -- have been trampled? You're darned right I am. At the risk of tossing journalistic decorum out the window, you might say I'm pissed. But I intend to pursue whatever legal means are available to rectify the situation -- although I have no idea, at the moment, what those might be, or if they even exist.

What rights are we talking about here? They are biggies -- the right to discovery and the right to a jury trial. They are central to any civil litigation you are likely to encounter. How was I denied those rights? When I sued UAB (the University of Alabama Board of Trustees) for wrongful termination and First Amendment violations, U.S. District Judge William M. Acker Jr. (now deceased) dismissed my case at summary judgment without allowing any discovery. All kinds of procedural and case law says that cannot be done. But Acker did it, cheating me out of rights that are supposed to be foundational, to which every plaintiff is entitled once he clears motion-to-dismiss hurdles.

In a roundabout way, the trial judge in Palin's case did the same thing as Acker. From a recent report at Politico:


A federal judge has ordered a jury trial in former Alaska Gov. Sarah Palin’s libel suit against The New York Times over an editorial linking her to the 2011 Arizona shooting rampage that seriously wounded then-Rep. Gabby Giffords and killed six others.

In the latest round of litigation in the case, U.S. District Court Judge Jed Rakoff rejected separate motions in which The Times and Palin claimed they should prevail based on the existing evidence and depositions in the case.

In a ruling issued Friday evening, Rakoff said the issues were not as clear-cut as either party suggested, so the matter will have to be decided by a jury. He set Feb. 1, 2021, as a target for a trial to open in the case, but noted that the date could be delayed as courts continue to struggle with in-person proceedings amid the ongoing coronavirus pandemic.

The initial version of the 2017 Times editorial said it was “clear” that the 2011 shooting was linked to a map Palin’s political action committee released that included crosshairs over Giffords’ Tucson district. However, no such link has ever been established. The shooter, Jared Lee Loughner, was found to be mentally ill and was sentenced to life in prison in 2012.

How do Palin's case and my UAB case intersect? From Politico:

The Times corrected that language the morning after the editorial was first published online, but Palin sued, claiming that then-editorial page editor James Bennet knew or should have known the claim was false because when he served as editor of the Atlantic magazine it published numerous articles indicating that no link between the crosshairs map and the shooting had been established.

Rakoff threw out the case in 2017 after an unusual early hearing in which Bennet testified that he was responsible for the error and simply forgot about the earlier articles.

But a federal appeals court revived the suit last year, ruling that the unorthodox procedure Rakoff used violated Palin’s rights under federal court rules to pursue evidence and testimony about the episode before a definitive ruling on her suit.


Where do the two cases diverge? As you can see, the Second Circuit Court of Appeals came to Palin's rescue, upholding her right to seek discovery. The 11th Circuit, based in Atlanta, provided no such rescue for me. It upheld Acker, in an unpublished opinion, even though he plainly violated circuit precedent, as stated in a case styled Snook v. Trust Company of Georgia, 859 F. 2d 865 (11th Cir., 1988):


Do I have any options other than to bend over and take it? My best answer at the moment is maybe. If the actions of Acker and the 11th Circuit amount to fraud on the court, my research indicates their orders would be void and open to attack via independent actions without time constraints.
That probably is a tricky route for any litigant to take, but my legal fight with the University of Alabama might still have life.

Aside from what happens in my case, here is the big picture: You can file a lawsuit in the Southeast and have the law applied (misapplied, actually) one way; another person can file a complaint in the Northeast and have the law -- on identical issues -- applied another way (correctly). That's not how a Constitutional system based on due process and equal protection is supposed to work. It's a sign our justice system might be broken even worse than some of us thought.

One hardly can escape the conclusion that the 11th Circuit is filled with a bunch of miscreants for judges, out of step with the Second Circuit and the plainly written law. That should be a concern for all Americans, especially those living in Alabama, Georgia, and Florida -- where the 11th Circuit reigns.
Posted by legalschnauzer at 7:11:00 AM