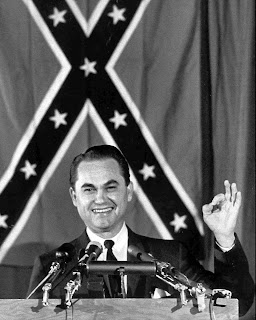 The late Schulyer Baker Sr., an early partner at the Balch Bingham law firm, was a noted insider with segregationist Gov. George Wallace. How much of an insider was Baker, whose son Schuyler Allen Baker Jr. now is general counsel at Balch as it wrestles with a number of controversies related to race? [The most recent controversy, going beyond race, involves the suspicious vehicle crash that nearly claimed the life of attorney Burt Newsome and reportedly has stunned the Birmingham legal and business communities.]

Newspaper archives indicate Balch Bingham has played rough for years. According to a July 1964 article at The Anniston Star, Baker Sr. was the go-to guy when Wallace wanted to make sure Birmingham businessman Elton B. Stephens Sr. (founder of EBSCO Industries) landed a state textbooks contract.

That meant canceling the textbook-depository contract of Paul Malone (from Northport), who had held it for seven years, and shifting it to Stephens, a close friend of Wallace. Baker was the aide Wallace chose to make that happen.

Malone was not happy with the outcome, claiming he was the victim of politics. He told the press he had discussed with Wallace the possible sale of the depository to Stephens but felt Stephens' offer was too low. Wallace's response? "We'll wait and see what happens?" This is what happened: Thanks largely to Schuyler Baker, Malone saw the contract swept out from under him. Wrote The Star:

On Oct. 1, the State Board of Education (featuring four new Wallace appointees) canceled Malone's contract and eventually awarded a new contract to Stephens.

Malone also told reporters that a Birmingham attorney, Schuyler Baker, who represented Stephens in the proposed sale of the depository business, told him in a telephone conversation that Wallace would cancel the contract unless Malone agreed to sell the property. Contacted in Birmingham, Baker denied it.

Malone showed newsmen copies of registered letters to and from Baker during the negotiations. Malone obtained an injunction to block the contract cancellation, but the Alabama Supreme Court overturned it, and the education board promptly awarded a new contract to Stephens.

Moving to the present day and controversies swirling around Balch, they might have recently increased by one when attorney Burt Newsome -- after court skirmishes with Balch and its clients, Alabama Power and Dummond Company -- was injured in a car crash that showed signs of being intentionally set up.

Was Newsome the target of a hit? The Birmingham legal and business communities are "stunned and in disbelief" after the Newsome crash, according to a report at banbalch.com:

Burt Newsome has been discharged from the hospital and is making a steady recovery. The Iron Man has even gone to his office, defying those who may have hoped he was permanently silenced or crippled.

Leading activists, business leaders, lawyers, and judicial branch employees in Alabama are stunned and in disbelief that Burt Newsome was almost killed.

Newsome has received a flurry of support and “get well” messages from colleagues and lawyers, but not a peep, not a squeak from Balch or their henchmen.

Was Newsome a victim once again? Many think so.