Time honors "guardian" journalists as Person of the Year, but the recognition comes five years late and largely ignores abuses right here on our home turf 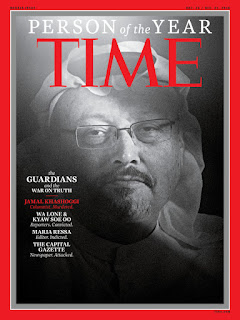 A group of journalists it calls "The Guardians" are Time magazine's 2018 Person of the Year, according to an announcement yesterday. The award, specifically, honors those who, via hard-nosed, challenging reporting, "have taken great risks in pursuit of greater truths."

Leading the list is slain Saudi journalist Jamal Khashoggi, and he is joined, among others, by five staffers who were killed in a newsroom shooting at Annapolis, Maryland. We certainly view the award as appropriate, but based on our personal experiences in Alabama, it's a case of "better late than never" -- and it largely ignores the risks taken by those who dare report uncomfortable truths about the powerful via non-traditional media, such as blogs, here in the United States.

From the Time article, titled "The Guardians and the War on Truth":

The stout man with the gray goatee and the gentle demeanor dared to disagree with his country’s government. He told the world the truth about its brutality toward those who would speak out. And he was murdered for it.

Every detail of Jamal Khashoggi’s killing made it a sensation: the time stamp on the surveillance video that captured the Saudi journalist entering his country’s Istanbul consulate on Oct. 2; the taxiway images of the private jets bearing his assassins; the bone saw; the reports of his final words, “I can’t breathe,” recorded on audio as the life was choked from him.

But the crime would not have remained atop the world news for two months if not for the epic themes that Khashoggi himself was ever alert to, and spent his life placing before the public. His death laid bare the true nature of a smiling prince, the utter absence of morality in the Saudi-U.S. alliance and—in the cascade of news feeds and alerts, posts and shares and links—the centrality of the question Khashoggi was killed over: Whom do you trust to tell the story?


Those are powerful words, straight from today's headlines. But how late are they? Well, sheriff's deputies beat and doused me with pepper spray inside my own home outside Birmingham, Alabama, on the evening of Oct. 23, 2013, and abducted me for a five-month stay in jail -- all with no warrant or any other form of legal process. I became the only journalist in the western hemisphere to be imprisoned that year. In other words, an attack on a free press happened in Alabama, while nothing of the sort happened in places like Venezuela, Paraguay, Honduras, and Mexico.

Time's Person of the Year article is important reading, but it's about five years late -- long after abuse of a journalist appeared right on our doorstep. Like Jamal Khashoggi, I faced retaliation for reporting on matters of critical importance -- rampant corruption in state and federal courthouses throughout Alabama, Mississippi, and the Deep South.

How is this for irony? The Time article comes eight days after a Legal Schnauzer post that asked, "Could something like the Jamal Khashoggi murder happen here?" The answer is, without a doubt, yes. From that post:

The murder of Saudi journalist Jamal Khashoggi --which Crown Prince Mohammed bin Salman ordered, according to the CIA --might be the most barbaric act against an individual in most of our lifetimes. But if you compare events leading to the murder with events surrounding my kidnapping and five-month incarceration in Shelby County, Alabama, you see enough similarities to think maybe the Khashoggi murder wasn't so "out there," after all.

In one respect, the Khashoggi incident was less radical than what happened to a U.S. journalist (me) in the Deep South: At least the Saudi criminals had the decency to abduct Khashoggi in a public place; Shelby County deputy Chris Blevins broke into our house, in broad daylight, to nab me -- an act unlawful on so many levels that it's hard to list all the state and federal laws it violates. And yet, U.S. Judge Virginia Emerson Hopkins (Northern District of Alabama) has found sheriff's deputies under the state constitution, have immunity to commit such acts, as being within "the line and scope of their employment." (No kidding.)

On top of that, we've pointed to evidence that suggests Republican thugs who orchestrated my abduction included my wife, Carol, in the Rob Riley-Liberty Duke lawsuit because the plan was to kidnap and murder both of us. If so, Carol's ability to remain free and get word out to the press -- plus the thugs' apparent reluctance to break into our house a second time -- probably is all that saved us.

Were we slated to be beheaded and dismembered, as Khashoggi reportedly was? Likely not, but who knows, maybe the Saudis have given Alabama thugs ideas to implement in their future endeavors.


American politicians are seeking some kind of sanctions for Saudi Arabia's crown prince over the Khashoggi murder , but what about American criminals like Rob Riley and Liberty Duke who sought arrests for Carol and me without the slightest legal grounds for doing so. Time's report gives the false impression that journalists face dangers mostly overseas:

And in prison in Myanmar, two young Reuters reporters remain separated from their wives and children, serving a sentence for defying the ethnic divisions that rend that country. For documenting the deaths of 10 minority Rohingya Muslims, Kyaw Soe Oo and Wa Lone got seven years. The killers they exposed were sentenced to 10.

This year brought no shortage of other examples. Bangladeshi photographer Shahidul Alam was jailed for more than 100 days for making “false” and “provocative” statements after criticizing Prime Minister Sheikh Hasina in an interview about mass protests in Dhaka. In Sudan, freelance journalist Amal Habani was arrested while covering economic protests, detained for 34 days and beaten with electric rods. In Brazil, reporter Patricia Campos Mello was targeted with threats after reporting that supporters of President-elect Jair Bolsonaro had funded a campaign to spread false news stories on WhatsApp. And Victor Mallet, Asia news editor for the Financial Times, was forced out of Hong Kong after inviting an activist to speak at a press club event against the wishes of the Chinese government. Worldwide, a record number of journalists—262 in total—were imprisoned in 2017, according to the Committee to Protect Journalists, which expects the total to be high again this year.


It's important for Time's readership to know about these abuses. The reference to a journalist in Sudan being detained for 34 days and beaten with metal rods sounds familiar -- except I was detained for 154 days and beaten (inside my home) with fists and covered in pepper spray. I still suffer serious health fallout from that assault, and that likely will not change in my lifetime. The same applies for Carol.

Why is it news when a journalist is beaten and jailed in Sudan, but not when something much worse happens in Alabama? Is Time afraid of upsetting the conservative political criminals -- including former Trump AG Jeff Sessions and current federal judge Bill Pryor -- who are behind the attacks on Carol and me?

Is it only an atrocity when it happens under a black regime in a "third world country," but it's not worth reporting when thugs who reek of white privilege carry it out in Alabama?


(Note: Legal Schnauzer needs your help. Loyal readers have sustained this blog for years, and support is urgently needed now that my wife, Carol, is recovering from a fainting spell, which led to a recent broken arm. The healing process has started for Carol, but statements from her doctors indicate this likely was fallout from political thugs cheating both of us out of our jobs [and health insurance] in Birmingham -- and the stress of dealing with financial wreckage that comes from being targeted for right-wing attacks.  If you are able to help along our journalism journey, please click on the yellow donate button in the upper right corner of the blog, under the "Support the Schnauzer" headline. We are deeply grateful for your support through the years.)
Posted by legalschnauzer at 6:09:00 AM