JPMorgan Chase and RAGA, who combined to steal our home of 25 years in Alabama, help dish out the cash that threatens democratic norms in Wisconsin


What happens when JPMorgan Chase and the Republican Attorneys General Association (RAGA) join forces? Recent events in Wisconsin indicate it could produce signs that your democracy is on its last gasps.

The issue has particular resonance here at Legal Schnauzer because we were the targets of a wrongful foreclosure -- launched by Chase Mortgage, likely in retaliation for my reporting on GOP corruption -- that cost us our home of 25 years in Birmingham, Alabama, and forced us to live like refugees in Missouri. Jessica Medeiros Garrison, a Republican operative and glorified thief/street tart in Alabama, clearly was involved via a defamation lawsuit where my reporting never was proven to be false, as a matter of law.

We recently presented evidence that Garrison, one-time campaign manager and paramour for former Alabama AG Luther Strange, had financial ties to JPMorgan Chase during her time as executive director at RAGA -- and those ties likely made it easy for her to help launch an attack on our mortgage. Garrison, it turns out, has a habit of bouncing from place to place when the heat starts turning up under her chair, as we reported:

Until January 2016, Garrison was senior advisor to RAGA and the affiliated Rule of Law Defense Fund (RLDF). Before that, she was executive director of RAGA and president of RLDF. Garrison started shifting away from those positions when The New York Times exposed RAGA as a glorified shakedown outfit.


Garrison also started lowering her profile when her extramarital affair with Strange -- which former Alabama Senate President Lowell Barron, among other sources, has confirmed -- became so widely known that it made her more of a liability than an asset.

As for Wisconsin, residents have seen the democracy-crushing influence of JPMorgan Chase and RAGA, both of which seem to operate without the slightest sign of a moral compass. Lame-duck Republicans have passed a series of measures designed to weaken Wisconsin's incoming Democratic governor (Tony Evers) and attorney general (Josh Kaul).

Vox.com, noting that Wisconsin-like chicanery also is under way in Michigan and North Carolina,  reports that "The Wisconsin power grab is part of a bigger Republican attack on democracy":

Michigan Republicans are currently weighing similar plans, and both are following in the footsteps of North Carolina Republicans, who passed a power-stripping bill after a Democratic victory in the 2016 governor’s race. State Republicans in three of the country’s most vital swing states are displaying open contempt for the most basic principle of democracy: that when you lose an election, you have to hand over power to your opponents. The national party hasn’t condemned these power grabs, giving the state legislatures tacit permission to rewrite the rules.

These power grabs highlight one of the most disturbing facts about American politics today: The Republican Party has become institutionally indifferent to the health of democracy. It prioritizes power over principle to such an extreme degree that it undermines the most basic functioning of democracy.

In the long run, the GOP’s turn against democracy could well be a greater threat to the American experiment than anything President Donald Trump has done.


Who is driving this train of GOP dysfunction? According to a report at The New York Times, that would be JPMorgan Chase and other corporations:

Walgreens portrays itself as the friendly neighborhood drugstore. It gives flu shots to children, helps communities after storms, donates to charity — and makes feel-good advertisements trumpeting its various good deeds. . . .

So you might think that an organization that claims to care about community values would speak up. But Walgreens has not. Neither have other corporate supporters of Wisconsin Republicans, like Microsoft, Dr Pepper Snapple, J.P. Morgan Chase or Humana. It’s yet another example — alongside soaring C.E.O. pay and stagnant worker wages — of corporations abdicating the leadership role they once played in America.


What about RAGA's role in the Wisconsin mess? It's been right there, with wallet wide open, according to the Wisconsin Democracy Train:

This Washington, D.C.-based group, which raises unlimited amounts from special interests to help elect state GOP attorneys general throughout the country, has been the biggest spender in the 2018 Wisconsin attorney general’s race. 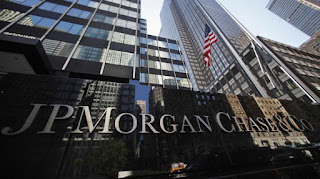 Most of RAGA’s spending was for three television ads which attacked Schimel’s Democratic opponent, Josh Kaul. The ads claimed Kaul had not prosecuted serious crimes in Wisconsin and had plea bargained for light sentences for drug dealers as a federal prosecutor in Maryland.

None of this surprises my wife, Carol, and me -- given our experiences with the same forces in the theft of our home. Is it a big step from stealing a mortgage to cheating he voters of Wisconsin?

For JPMorgan Chase and RAGA (with affiliated scum suckers like Jessica Garrison) the answer apparently is no.
Posted by legalschnauzer at 6:11:00 AM