Today marks the 26th wedding anniversary for Mrs. Schnauzer and me. As we prepare to "celebrate," Carol is recovering from a badly broken arm, courtesy of a Missouri deputy who, with a half dozen or so cohorts, was executing an unlawful eviction on September 9. (See X-ray No. 2 above.) Any "celebration" will come in or near a flea-bag motel in Springfield, Missouri, where we live on a week-to-week basis, now that lawyers and judges in two states (Alabama and Missouri) have helped steal just about everything we've ever worked for--including our home of 25 years in Birmingham. For good measure, my two brothers (Paul and David Shuler) have instigated a petition, which has zero basis in fact or law, that seeks to have Carol and me declared incompetent.

Got to love that family support!

As for the X-ray above, we showed you No. 1 yesterday, and this one is a slightly different view of the area that includes multiple fractures. Just above Carol's elbow, you will notice that screws and titanium plates form a five-sided geometric figure. Inside that figure, you can see lines that represent fractures. The damage is so severe that Carol's caregivers have said a 95-percent recovery might be the best we can hope for.

Do we actually have anything to celebrate today. I think we do; for one, we're still together--in mind, body, and spirit--so, in an age of starter marriages and rampant dysfunction in many homes, I consider that an accomplishment. If I'm going to have to experience a bunch of crap in life, I would rather experience it with Carol than anyone else. And when things are going well--although we might never get to such a state again--Carol is a fine companion then, too.

I thought about staying away from the blogging gig on our anniversary, but the 26 years Carol and I have spent together inspired me to share a few thoughts on various marriage- and justice-related subjects. I hope you will find them worthwhile, so here it goes . . .

* Take those marriage vows seriously; they can be a bee-atch--If you are married in a traditional Christian ceremony, you likely will say vows that go something like this: "I, (Roger), take thee, (Carol), to be my wedded wife, to have and to hold, from this day forward, for better, for worse, for richer, for poorer, in sickness and in health," When the vows raise the specter of bad things that can happen in a marriage--"for worse," "for poorer," "in sickness"--they aren't joking. Carol and I have had a lot of good things--even wonderful things--happen during our 26 years of marital bliss. But we've had up-close-and-personal experiences with that "for worse" and "for poorer" stuff. In terms of sickness, we both have been diagnosed with PTSD, and that has very real repercussions. Otherwise, our general  health seems remarkably good for all we've been through. When most of us think about those scary parts of the wedding vows--if we think of them at all--we tend to consider things like accidents, unavoidable health woes, mistakes, job loss for legitimate reasons, etc. In other words, it all comes under the heading of "s--t happens." But that's not necessarily the way it works in real life. Almost all of our negative experiences have intentionally been heaped upon us by bad people. We didn't lose our jobs (at UAB and Infinity Insurance) for legit reasons--political forces stole them from us. A word to the wise: If you are married, you likely will have a few things that you value, that generally are seen to have worth. If you have any such items, whether they be living beings or inanimate objects, there is always someone out there who would not mind stealing them. All of our legal problems started from a neighbor, with a significant criminal record and signs in his past that he has sociopathic tendencies, who wanted to (in essence) steal our yard. He wanted to use it without permission, and without paying for it and helping to care for it, and that's what I call stealing. Even if we are talking about real property, which can't be moved, bad people still can try to steal it from you--as this guy did, in part, by fencing in about 400 square feet that clearly belonged to us.

* Stand for something, especially something that causes you to step outside your comfort zone--A friend of long standing recently scoffed at the notion that Carol and I should seek to be restored for all of the civil (and criminal) wrongs that have been committed against us. This fellow doesn't deny that we've been cheated in horrific ways, but his counsel is to just accept it and more or less "push the reset button." As for seeking restoration and justice via the court system, this fellow opines, "The system doesn't work that way."

Some of you might be thinking, "I would tell that 'friend' to hit the highway and never come back." I'm starting to think along the same lines, but he did cause me to be extra grateful for the kind of woman I married.

Critics are free to aim their arrows at Legal Schnauzer, and quite a few of them do, but no one can dispute that Carol and I have stood for something. I'm the author of the blog--and except for the five months when I was in jail, and Carol kept it alive--I am solely responsible for its content. But Carol signed off on this effort to expose corruption, when many spouses would have shied away. We've paid a heavy price for the journalism here, and we've attracted quite a few enemies.

But have we made a difference? Ask some of the victims of injustice we've reported on--Don Siegelman, Sherry Carroll Rollins, Linda Upton, Richard Scrushy, Paul Minor, Bonnie Cahalane, Wes Teel, Dr. Mark Hayden, and many more. Their answers, I feel certain, would be yes.

* Try to stand with someone who represents the goodness in mankind--Carol and I have our cynical moments, and there is no doubt that we now are very slow to trust anyone. And we certainly can get on each other's nerves from time to time. But I don't think we've allowed our unpleasant experiences to turn us into cynics. We still believe goodness exists out there.

I've seen goodness in my wife for 26 years (28, if you count two years of dating). Consider our recent "eviction," the one that led to Carol's broken arm: When deputies allowed her into our apartment to retrieve some of our belongings, the first thing she made sure to get were the wooden urns that contain the ashes of our two late, beloved pets--Murphy, the miniature schnauzer for whom this blog is named, and Chloe, the beautiful Tonkinese kitty kat who died of cancer in July of this year.

Carol has a number of inanimate objects that she values--her furniture, her jewelry, her clothes. But the first things on her mind, in a moment of crisis and terror, were Murphy and Chloe. In fact, Carol's arm was shattered because she was trying to return to the apartment to retrieve the litter box for our one surviving pet--Chloe's brother, Baxter.

At a moment of extraordinary stress, when she had just been handcuffed and had multiple weapons pointed at her, Carol thought outside herself. Murphy, Chloe, and Baxter, technically, are not "of" Carol--they are not the "fruit of her loins." But she loved Murphy and Chloe dearly (and she loves Baxter dearly now), and they were the first beings who popped into her mind as she and I were facing homelessness--and, given all the weaponry, on the premises, possible execution.

Back on the subject of X-rays, here is No. 3 below, which shows that Carol's arm needed support well above the elbow. We are guessing this is because her arm was dislocated, in addition to being broken. 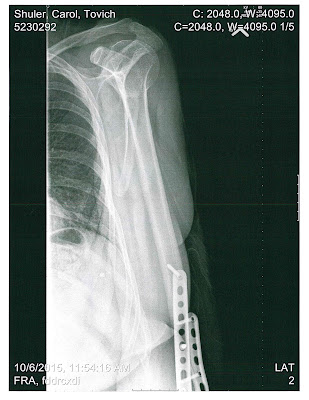 Happy anniversary Roger and Carol. Inspite of all the world has thrown at you, you do have each other :-) . I am sending you a bottle of Champers. Check PP.

I have been a silent reader for almost 2 years. I wanted to say Happy Anniversary. You are both so courageous. I enjoy you and I admire you for always having the guts to do what is right.
God bless you and your wife.

I enjoyed hearing the lovely comments about your wife. It is wonderful that y'all are standing strong, together. In spite of all this adversity.

Anne Boleyn had been denied permission to marry on multiple occasions by Cardinal Wolsey. Then, Henry VIII took a liking to her & Boleyn Family friend, my ancestor John Baker, went from being just an ordinary lawyer to the Recorder of London who sat in Judgment of Wolsey & confiscated all Catholic Church property in England. Our chance to overthrow the corrupt system is coming. We will overcome! Keep the faith Brother. God will deliver us from Southern bigotry & racism even if His name is Allah & Mohammed, Peace Be Upon Him, is His Prophet.

Greetings & Salutations on your special day!

Touched, with all you've been through. This is courage beyond any I have seen.