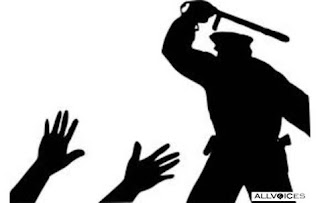 How wildly unlawful was the "eviction" that led Missouri deputies to brutalize my wife and leave her with a shattered left arm that required trauma surgery? Well, the deputies had no lawful grounds to be at the apartment we were renting, much less to handcuff Carol and me, point multiple handguns and at least one assault rifle at us, and cause many of our personal belongings to be stolen.

Perhaps the best way to illustrate that point is with two documents--a Motion to Quash Execution and a Notice of Appeal. Both were timely filed in Trent Cowherd v. Roger Shuler, a case where landlord Cowherd Construction, of Springfield, Missouri, tried to evict us contrary to state law. Both documents are embedded at the end of this post.

With Jim Arnott, the sheriff of Greene County, Missouri, on hand to supervise a half dozen deputies or so, you might think that someone would have a clue about the law applicable to such situations. But you would be wrong. And Arnott certainly did nothing to keep his underlings from engaging in blatant police brutality.

We will go into more detail in upcoming posts, but here is the simplest way to understand that this eviction--which really was an orchestrated act of terrorism--was off-the-charts unlawful.

If you check item No. 4 in the Motion to Quash Execution, you see that the eviction was scheduled for 9 a.m. on September 9. But Revised Missouri Statues 534.350 (RSMo. 534.350) says no execution shall be levied until the time for appeal has expired. Missouri Supreme Court Rule 81.04 sets the time for filing a Notice of Appeal at 10 days from the time a judgment becomes final.

Rule 74.01 states that "a judgment is rendered when entered. A judgment is entered when a writing signed by the judge and denominated "judgment" or "decree" is filed." The docket for Cowherd v. Shuler can be found by going to this link, typing my name into the litigant search and clicking on the entry for the case title. The docket shows judgment was entered on August 31, 2015.

Missouri Rule 44.01 states that the first day of "an act, event, or default" is not to be included in computation of time, but the final day of the period is included. That means our 10-day period for filing an appeal ended on Sept. 10, 2015. Our Notice of Appeal was filed on the morning of Sept. 8, so we were more than two full days inside the window for filing an appeal.

That put a stay on execution of the notice of eviction (per RSMo. 534.350 noted above), which had been scheduled for September 9. Attorneys for all parties were served via e-mail with both the Motion to Quash and Notice of Appeal at 4:44 p.m. on September 8, so they had plenty of time to notify Cowherd Construction and the Sheriff's Department that the eviction could not take place.

As a matter of fact and law, it was improper for the eviction to be schedule for September 9 in the first place, which even without a notice of appeal, was inside the window when execution could not be levied.

The eviction raised a number of other legal issues, and we will address those in future posts. But for now, this is the most direct way to show that law-enforcement had no grounds to be at or in our apartment on September 9, 2015. And they sure as heck had no grounds to burst through the door, point guns at us, handcuff us and brutalize Carol to the point that her arm was broken.


Cowherd--Notice of Appeal by Roger Shuler

I would say Carol has grounds for a pretty nice lawsuit over this, as do you. More disgraceful behavior from those who "protect and serve."

The police state is here.

I find it incredible that they scheduled the eviction inside the 10-day window when Missouri law clearly says execution could not be levied--even if you hadn't filed a notice of appeal. That blows my mind. These people have zero respect for the law.

You are right on target, LawBabe, as I would expect a LawBabe to be. Even if I had passed on my right to appeal, the eviction could not lawfully be schedule for Sept. 9, inside the 10-day window when execution cannot be levied.

Gloria Allred needs to be alerted to this.

It is unreal that this is happening in out modern day "enlightened" society. But, I fear, generations to come will look back on our time period and be amazed by how crooked it was.

Please, please sue the judge, the deputies, the sheriff, the county, the state. Sue them all.
Evil allowed to continue should not be permitted.

Roger, can you explain the motivation of the Missouri court and landlord? You are not in Alabama anymore, but it sure seems like it. Are the Rileys involved again or is there another external force at work here? This seems to go way beyond sheer ignorance or laziness of the court.

I can't explain the motivations of the court and landlord, @12:55. I can only guess, and it sure does smell like Alabama involvement of some kind to me. You are correct that this goes way beyond ignorance and laziness by the court. In my view, it was a set-up, and multiple lawyers and law-enforcement types knew it.

I think a lawsuit is in order for sure, @12:32, but it's almost impossible to successfully sue a judge due to immunity issues. The others you mention probably are fair game.

What grounds did your landlord claim to evict you? I read where you were up to date on your rent.

Landlord didn't cite any grounds. Just said they wanted us out, when the lease was due to go month-to-month.

How much notice did the landlord give you to get out?

You can read the notice to vacate here:


You can read the lease here:


If you read both carefully, you will find at least one way the landlord violated his own lease. (There actually were more than one violations.)

you can't appeal an interlocutory judgment. but seems like the judgment is final now that the case has been dismissed.

I'm no lawyer but I can count and cowherd didn't give you 30 days notice. And he didn't give it to you on the 1st of the month. You got screwed.

You are on target, @3:36. They violated their own lease, and that's not the only way they violated it. You're not a lawyer, but maybe you should be. The profession certainly could use a few honest, intelligent people--although your state bar probably would try to steal your card if you exhibited those characteristics.

the police in one state do not have to be overtly involved, but I'm sure the police in Missouri know what happened with the police in Alabama and they most certainly will know what Legal Schnauzer had to say about all of it. That would make a lot of back water police upset with Legal Schnauzer and Mrs. legal Schnauzer. its always helps to break someone's bones to really send a message not only to those involved but to anyone else who wishes to "buck the system".

Now as to what can be done, suing is always expensive, even if you have a free lawyer. Justice is not blind, its expensive.

Excuse my ignorance on these matters, but it seems you have the documents, and more than one cause for lawsuits. I'm wondering if people, supporters, can file class-action or otherwise let the courts know that they also have copies of the illegal eviction and your legal appeals, etc? It seems that the more who have these documents, the more no one can try to say it's your word against theirs. I am so sorry this has happened to you and your wife. Come to Washington State!