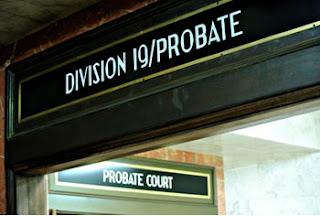 How off-the-chart nuts is my family's plan to have my wife, Carol, and me declared incapacitated and disabled in the wake of our unlawful eviction that led Missouri deputies to break Carol's arm in multiple places? To answer that question, it helps to learn a little about Missouri law on what are called "INP and DIS" cases.

I'm a long way from being an expert on this area of the law, but I've studied enough to know that Carol and I do not come close to meeting the definition of "incapacitated" or "disabled," there are no grounds for appointment of a guardian or conservator, and it appears that my brother, Paul, who is listed as petitioner, does not have standing to bring such a case. So why has he filed such a case in Greene County Probate Court?

This dubious train seems to be driven by my two brothers--Paul, a radiology tech at Mercy Hospital in Springfield, Missouri, and David, a lawyer in Springfield (at Shuler Law Firm, focusing mainly on divorce and DUI defense cases). If no lawful grounds exist for bringing such a case, what gives? My best guess is that it's an effort to ensure we cannot seek justice against the Greene County Sheriff's Department, landlord Trent Cowherd, and Lowther Johnson law firm (representing Cowherd), and anyone else who might be liable for injuries we suffered in an unlawful eviction on September 9--including Carol's shattered arm, which required repair from a trauma surgeon, using all sorts of screws and titanium plates.

According to Carol's care providers, it very much is in doubt whether she will regain 100 percent use of her left arm. But my brothers apparently could not care less about that--in fact, neither has expressed the slightest concern about Carol's injuries, and neither has anyone else on my side of the family. It's deeply touching to see family members respond to such a serious injury with what might best be described as utter callousness. The "INP and DIS" case seems designed to ensure that no one ever is accountable for the assault on Carol--and if she never regains full use of her arm, well, why should a lawyer and a Mercy Hospital employee (who is engaged in patient care) give one iota?

They don't, and they apparently don't mind grossly abusing the legal process to seek whatever perverted outcome they are after.

What about Missouri law on "INP and DIS" cases? An online document titled "Guardians and Conservators Under Missouri Law" shines light. (It's in a PDF format to which it apparently is not possible to link, but a Google search of the document title should bring it right up.)

Here is the answer to one key question:

What Does it Mean to Be Incapacitated or Disabled?


Neither Carol nor I come close to meeting that definition. We have food, clothing, shelter, and safety--we are in no position where serious physical injury, illness, or disease to likely to occur. Despite all we've been through, our overall health probably is as good, or better, than anyone on my side of the family. In terms of ethics, I might be the only one from our Missouri clan who has any left.

My brother, Paul (the petitioner), should know that we are not incapacitated or disabled. But since we moved into an apartment here in July 2014 he has communicated with us exactly zero times--no phone calls, no e-mails, no visits, zip. But he's supposed to have some knowledge of our mental and physical status? My brother David (the lawyer) isn't much better. He has sent a few e-mails, but we haven't seen him or talked with him at all. And substantial evidence suggests David was involved in setting up the bogus eviction that led to Carol's broken arm.

He, at least to some extent, is responsible for her injuries, so it's little wonder that he wants to have her (and me) declared incapacitated so we possibly would be precluded from pursuing legal claims against him. Gee, do you see a little self interest here in my brother's actions.

Here is the answer to another central questions:

What is the Legal Effect of a Judicial Determination of Incapacity or Disability?


We could be declared incompetent and essentially lose all our rights and even our freedom, becoming wards of the state--all at the request of two brothers who know virtually nothing about us or the numerous court cheat jobs that have caused us to lose our home and many of our possessions.

And finally, we have this:

Who May Be Appointed Guardian or Conservator?\

If no suitable person has been nominated by the incapacitated or disabled person, the court will consider appointing, in order: the spouse, parents, adult children, adult brothers and sisters and other close adult relatives.


As you can see, the No. 1 person on the list to be declared a guardian or conservator is "spouse"--and that would be Carol. That's a slight problem for my devious brothers, so they are trying to have her declared incapacitated, too--which I would guess is against the law.

As for "adult brothers and sisters," they are well down the list. That probably means my brother Paul does not even have standing to bring such a case. The Paul J. Shuler I used to know would not try to pull such a low-down stunt. But apparently, that person doesn't exist anymore.

And I'm starting to wonder if my lawyer brother ever was worth a crap. Since joining the legal tribe, he certainly is proving to be quite the "bottom feeder."
Posted by legalschnauzer at 10:17:00 AM

I"m sorry your brothers are mistreating you in such a horrible fashion. We have horror stories about my family, too. However, in my family, the business sector seems to have corrupted a lot of them. Not the legal profession.

Glad to see you've still got your sense of humor.

I hope your lawyer brother loses his bar card over this, and your hospital brother should lose his job. Trying to take away someone's freedom is serious business, and they aren't taking it seriously. They also should know that they don't have a case.

I'm not aware of my brothers taking any steps to claim Carol and I were incapacitated prior to Carol's arm being broken as part of our unlawful eviction. That thought apparently only occurred to them after Missouri cops, lawyers (including one of my brothers), and a landlord royally screwed up our "eviction," which was unlawful on multiple grounds to begin with.

I don't know you but I like reading legalschnauzer. I will pray for you and Carol. You losing your job, then facing a lawsuit, kicked out of your home, all of which would drive me over the edge. Not having a secured roof over your head, seeing the police harm your wife, all of it has to be stressful. I only hope that it will soon work out for you and Carol and you will have family/friends around you that do care and love you. I hope this nightmare will end soon so that you can get back to reporting on what matters. Does that penis belong to our fine out standing God fearing federal judge or NOT!!!! Is a PMO order "penis measurement order" need? Who will the court appoint to carry out the PMO order? This is the type of news questions we need to be reading about. Leave legalschnauzer alone, let him do the reporting that only he can do.

If Paul Shuler can't be entrusted with public courts, why should he be entrusted with private patient records at Mercy Hospital Springfield? If Paul Shuler is going to let his lawyer brother, David, lead him around by the nose, why should we believe that might not happen someday to the detriment of a patient at Mercy Hospital? Maybe it already has.

Your comment made me LOL, @1:31. That is greatly appreciated. Maybe you need to start your own blog. You certainly have a way with zingers.

I suspect that the roots of your problems lie in Alabama. I feel that one day Rob Riley will rule Hell. He has definitely done one Hell of a job ruling his minions here.

What did Roger and Carol ever do to you you bastards?! Nothing! Sons of bitches is what you are! And yours and Roger's mother is an old bag bitch!

I think you are on target, From Parts Unknown. I think some sort of communications pipeline has developed between Alabama and Missouri, and I suspect it has existed for quite some time. It's certainly possible that Rob Riley, or one of his associates, is involved. Jessica Garrison is another strong candidate.

It's hard to give up on family. I always hope for the best with mine and have rarely not gotten it. We just have decided not to discuss politics at all since our mindsets are completely opposite. Did you move to MO. in hopes of reconnecting with your family? If so, this is just too sad for words.