Vanguard Group, the nation's largest mutual-fund company, received unwanted attention after the Sandy Hook massacre in December when reports showed that it was a major financial supporter of gun manufacturers. Based in the Philadelphia suburb of Malvern, Pennsylvania, Vanguard is the No. 1 holder of Smith &  Wesson stock and a top-five investor in Sturm Ruger.

John C. "Jack" Bogle, founder of Vanguard Group, said in a radio interview just days after the mass shooting in Newtown, Connecticut, that the investments simply were part of the firm's strategy to "hold the market" via index funds. (See video at the end of this post.)

Bogle's message, in so many words, was that Vanguard can't be held to any standards of ethical investing because gun manufacturers are in the market, and his firm is committed to "holding the market." If gun makers' products wind up being used to slaughter school children . . . well, Vanguard really can't do much about that, Bogle seemed to be saying.

The assault met the definition for child abuse under North Carolina law, even though Rollins was prosecuted only for a "simple assault." Does it bother Vanguard Group that it supports a CEO with a documented history as a child abuser? The answer apparently is no.

Part of the reason might be that Vanguard has a long history of supporting various Rollins-family enterprises. It is a major holder in Atlanta-based Rollins Inc., the umbrella company for Orkin Pest Control. It also is a prime investor in RPC Inc., a Rollins company that offers a number of services related to oil exploration and drilling. 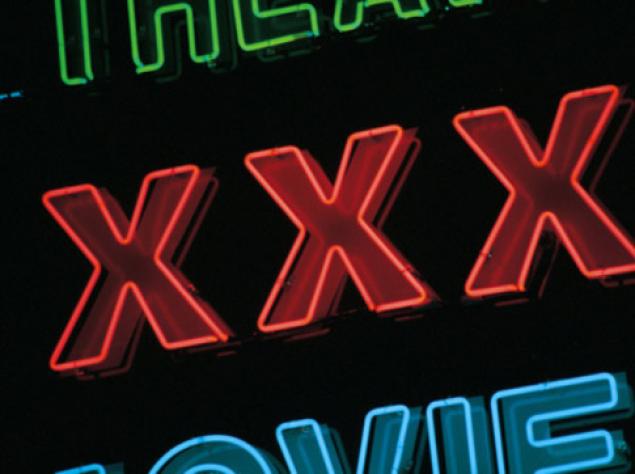 That last one might come as a bit of a surprise to big-money investors who consider themselves "conservative." But it's right there in the public record.

* Private Media (PRVT)--Based in Spain, Private Media is a worldwide distributor of pornographic films. According to records at rocketfinancial.com Vanguard is the company's No. 5 investor.

* LodgeNet Interactive (LNET)--Based in Sioux Falls, South Dakota, LodgeNet is a major provider of pornographic films for the hotel industry. The company has been struggling financially, but Vanguard holds almost 629,000 shares.

We are the largest holder (in Smith & Wesson), and we probably own about 5 percent of every corporation in America. The reason we do is that our strategy is one of hold the market. Smith & Wesson is in the market, so we will be holding that.

Should we speak up? The answer is yes. Should we get out of the stock? I think that is pretty debatable because if your whole strategy is to hold the whole market, you end up making a whole lot of judgments that are never quite as clear as one might hope.

It's something we ought to be thinking about, but we couldn’t go to Smith & Wesson  management and say, "Get out of the gun business." That’s their business. . . . If we got out of that stock, the company wouldn’t even know it; somebody else would own it. You don’t have the kind of clout you would think that a 5 percent or so owner would have.

Should Americans casually accept such an explanation from a company that carries massive financial clout? Perhaps it's time we all started asking ourselves that question.

Here is an interview with Bogle on the Radio Times program at radio station WHYY in Philadelphia, from December 2012, just days after the Sandy Hook shootings:

The President of Iceland said the most profound statement:

Now this is because of THE SO CALLED FEDERAL RESERVE SYSTEM, which is R.I.C.O. globally and operates the U.S. of A.

This is especially true of an umbrella for VANGUARD ET AL.

"... Grimsson gave a famous reply to the financial MSM reporter, stating that Iceland’s recovery was due to the following primary reason:

.. We were wise enough not to follow the traditional prevailing orthodoxies of the Western financial world in the last 30 years. We introduced currency controls, we let the banks fail, we provided support for the poor, and we didn’t introduce austerity measures like you’re seeing here in Europe. …“

.. When asked whether Iceland’s policy of letting the banks fail would have worked in the rest of Europe, Grimsson replied:

.. Why are the banks considered to be the holy churches of the modern economy? Why are private banks not like airlines and tele-communication companies and allowed to go bankrupt if they have been run in an irresponsible way? The theory that you have to bail-out banks is a theory that you allow bankers enjoy for their own profit their success, and then let ordinary people bear their failure through taxes and austerity....

..  People in enlightened democracies are not going to accept that in the long run....

THERE IS THE ANSWER TO AMY BISHOP AND WHY VANGUARD CONTROLS THE PORTFOLIOS OF COURTS, LAWYERS, DOCTORS ET AL.

The numbers do not lie and liars don't do real numbers.

Vanguard is very RICH and thus, so are those that invest in retiring via Vanguard.

The criminal R.I.C.O., is clearly a CIVIL abomination of "reality."

Why the people in America have not revolted? DRUG ADDICT NATION.

People in the U.S. for a majority are addicted to the consumerism that has literally criminally destroyed our "life realities," and the civilized [Vanguard] do not care about an enlightened democracy.

We can invest in far greater ideas than what Vanguard and any of the so called "American Financial Corporations," offer.

Need to kick some very bad habits of drugs, and the robotic consuming whatever can be purchased via brain dead actions.

More Vikings are needed here. The Vikings went to Iceland after kicking the same "Pirates" out of the Great Britain area, more than three times and now once again in the modern time.

Hmmm . . . this post suddenly makes Vanguard Group seem more interesting than they were before.

Boca Raton ~ "Rat's Mouth," the common term, but not really what the name was in the beginning as well defined by the Indians native to that land and then of course the Spaniards talking language best they could.

Beautiful there and the arts were flourishing during the boom, before the 9-1-1 change the world order into "creative destruction" [again].

Romney looks like a Big Pharma Zombie in every photo of him. The WHITES of his eyes are what happens to crazy people ~ a spinning white saucer like Roger Rabbit insane look.

Bogle is a Bull Dog face and with all his money he could have health diagnosed by the leading true medical geniuses in the world.

His eyes are sunk in and underneath the bags are what happens to kidneys, failure of the organs AND no doubt lots of the drugs to make believe he is alive.

Big Pharma has manufactured Zombies and these criminally insane are running the Big Ship Lollypop U.S. of A.

In a few words, sinking ships are already past the loose lips.

I would really love to hear more from Jack Bogle about "ethical investing."

The products in America have been an intentional lowest common denominator for the society to be as third world as can be.

Tim Geithner went to the International School in Bangkok, ?1970s or thereabouts.

Why would the "leaders" of the U.S. of A. choose to have people that are edified in behavior?

Which pays the big bucks?

Hmmmmm, Tim Geithner was not stupid in taking the helm from Hank Paulson who is also a sub human zionist scum bag.

The "Federal Reserve System," [FED] AND its ilk of umbrellas, [VANGUARD] are GOD-SATAN of America. ISRAEL is the capitol state for the state of U.S. and has been since 1948, and creeping more deadly every second into lives by the bio-metric gulag called "social credit."

Don Siegelman is a victim of this sub human filthy dis-ease.

These questions keep me awake at night.

You made me LOL.


I see a trend forming.

Which brings up the point of what is and isn't considered a crime in the state of Alabama with its tested and upheld obscenity laws.

Regarding the looks of Bogle, Cheney, Ted Rollins and these other "blood sucking ghosts" of capitalism- I wonder if Ted Rollins and his apartment company allow guns at "student apartments" which are referred to in their ads as "fully loaded living". I suppose these Vanguard backed companies could actually work together to compliment each other and raise the stock prices in these companies. For instance, make sure that every student, or non student who lives in Campus Crest are allowed to have guns and encouraged to have them because of the high crime rate in these apartments at 42 college campus locations? This could help Smith Wesson, Ruger sell more guns to students which would then make more criminals to fill the prisons which are also Vanguard Group companies. Just wondering.

Applause seems to be in order today Legal Schnauzer. You have given us all an education regarding how Dick Cheney, Jack Bogle are keeping our world supplied with guns for wars, guns for hunting, and guns for shooting students at schools, college students and even 5 year old kindergarten students. Guns are apparently big business. I wonder if the money spent on guns in America alone would feed the entire world' s hungry?
Vanguard Group, NRA, Smith Wesson, Ruger should all be held accountable for their part in these murders. I would bet Dick Cheney knew to invest in Vanguard and their gun companies as he knew he and George W. Bush were getting ready to make so many wars which would require these guns. It would be interesting to find out if Smith Wesson and these gun companies are selling guns to foreign countries wouldn't it?

I wonder if these universities, colleges where Campus Crest has built their apartments for "students" are aware that this company is changing the safety of students at universities ? Are they aware that campus police can not come near these complexes, and the local police are resentful of the increased 911 calls and crime in their areas. I read that the local police were on site at one particular apartment complex more than 300 times in one year. Would this also see that more young students are being jailed instead of exspelled from the colleges?

How is it possible for the Alabama Bar prosecute a compliant against an Alabama attorney for what may have happened in a Georgia court which is under the jusrisdiction of the Georgia Bar.

Why do we not know the cause of death in this case?

Both good questions, David. I know the family recently pushed for a determination on cause of death and was stonewalled. Not sure how the Alabama State Bar would have jurisdiction over events that took place in Georgia, where Ms. Clark had been admitted pro hac vice.

P.S.--David, I think you probably commented on the wrong post. I will move it to the one on Jennifer Page Clark.

Say what you want about Vanguard's investment strategy, but don't blame Jack Bogle. He is a fine gentleman and no longer CEO.

Jack is a little more down to earth and outspoken for Vanguard. He is loved by all employees, past present and future.

Say what you want about Vanguard's investment strategy, but don't blame Jack Bogle. He is a fine gentleman and no longer CEO.

Jack is a little more down to earth and outspoken for Vanguard. He is loved by all employees, past present and future.