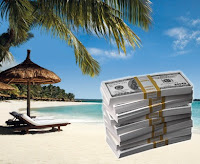 Ultra-rich individuals around the globe are exploiting tax havens to hide an estimated $21 trillion offshore, according to a new study by the Tax Justice Network.

The so-called "black money" is equal to the combined GDPs of the United States and Japan, and the scope of tax dodging is revealed in a report titled "The Price of Offshore Revisited."

James Henry, a former chief economist at the McKinsey & Company consulting group and an expert on tax havens, compiled the study. Reports The Guardian of London:

[Henry] shows that at least £13tn – perhaps up to £20tn – has leaked out of scores of countries into secretive jurisdictions such as Switzerland and the Cayman Islands with the help of private banks, which vie to attract the assets of so-called high net-worth individuals. Their wealth is, as Henry puts it, "protected by a highly paid, industrious bevy of professional enablers in the private banking, legal, accounting and investment industries taking advantage of the increasingly borderless, frictionless global economy." According to Henry's research, the top 10 private banks, which include UBS and Credit Suisse in Switzerland, as well as the US investment bank Goldman Sachs, managed more than £4tn in 2010, a sharp rise from £1.5tn five years earlier.


The study hits close to home here at Legal Schnauzer in both a macro and micro way. From a large-scale perspective, we have a major-party candidate for the U.S. presidency, Mitt Romney, who reportedly has made ample use of offshore accounts. From a small-scale perspective, we have the story of American CEO Ted Rollins, the head of Charlotte-based Campus Crest Communities and a member of the family behind Orkin Pest Control, one of the wealthiest clans in the country.

Have Ted Rollins and his billionaire cousins--Randall and Gary Rollins of Atlanta-based Rollins Inc.--made use of offshore tax havens? The answer to that question is not clear. But we know that India has become a popular destination for offshore funds. And a source tells us that Ted Rollins made a two-week visit to India in fall 2010, about the time Campus Crest Communities completed a $380-million IPO on Wall Street.

Vivek "Vick" Seth, managing director at Raymond James, put together the Campus Crest IPO. And our source says Seth has extensive ties to the banking community in India. Our source also says that Ted Rollins has been known to brag that his company has paid little or no taxes in recent years.

Aside from Mitt Romney and the Rollins family, what does this mean on a global scale? The Guardian provides an alarming answer:

The sheer size of the cash pile sitting out of reach of tax authorities is so great that it suggests standard measures of inequality radically underestimate the true gap between rich and poor. According to Henry's calculations, £6.3tn of assets is owned by only 92,000 people, or 0.001% of the world's population – a tiny class of the mega-rich who have more in common with each other than those at the bottom of the income scale in their own societies.

"These estimates reveal a staggering failure: inequality is much, much worse than official statistics show, but politicians are still relying on trickle-down to transfer wealth to poorer people," said John Christensen of the Tax Justice Network. "People on the street have no illusions about how unfair the situation has become."


Here is a report from Russia Today, including an interview with James Henry, author of the tax-haven study. He says leaders of the offshore economy are some of the same large banks that received billions in bailout money from the federal government. Now, Henry says, our democracy must come to grips with what he calls the "pirate banking industry."

I'm starting to think Russia Today is one of the more reliable sources of news we have.

Yes on Russia Today, best information sources for Americans, yes one of the best, how sad it this!

Super pirates by the way.

Queen Elizabeth was the Queen Pirate and India was and is a colony.

Now with Virtual Credit to auto pilot the wealth away, Super Pirates of digital no due process!

Thanks for the great post on your blog, it really gives me an insight on this topic.