Republican Party In Alabama Is Infested With Indian Gaming Cash


Sentient beings in Alabama have known for a long time that the Republican Party in our state is a wholly owned subsidiary of Indian gaming interests.

Even non-sentient beings should be aware of that now, following yesterday's report that the Poarch Creek Indians gave more than half a million dollars to help the GOP take over the Alabama Legislature in 2010.

The story shines significant light on the gaming interests that help control the Alabama GOP--while the GOP claims to be against gambling. It also helps explain the driving forces behind the federal bingo trial that targeted mostly Democrats in the Alabama Legislature.

We've known for years that Bob Riley's run to the governor's mansion in 2002 was fueled with some $13 million of gaming money from the Mississippi Choctaws, laundered through GOP felons Jack Abramoff and Michael Scanlon. Now we know that former Alabama GOP chair and current House Speaker Mike Hubbard has been singing from the Riley hymnal.

Alabama political insiders have been saying for months that Hubbard loves to crow about his role in the GOP's 2010 takeover of the state legislature. Now we know, to a great extent, how he did it. Will federal law-enforcement officials take a look at Hubbard and his acolytes for possible signs of money laundering, election violations and other misconduct? Time will tell. For now, we have this from al.com:

The Poarch Creeks, based near Atmore, gave the Alexandria, Va.-based Republican State Leadership Committee $350,000 before the November 2010 election and another $200,000 in January of this year.

The RSLC pumped more than $1 million to Alabama campaigns in 2010, largely to the Alabama Republican Party and a political action committee aimed at helping Republicans take over the Alabama Legislature. It also gave to a group that opposed legislation aimed at allowing electronic bingo machines at non-Indian casinos.


That last sentence, in bold, might be the most illuminating news in the whole story. It tells us that the Poarch Creeks supported both the GOP and a group that opposed electronic bingo at non-Indian casinos. Curiously, the al.com piece does not name this "anti-gambling" group. Our guess is that it's Citizens for a Better Alabama (CBA), a shadowy outfit that is led by a Birmingham-area lawyer named A. Eric Johnston.

CBA sponsored a "Special Report" that was inserted into some 40 Alabama newspapers at the height of last year's bingo controversy. If our guess is correct about the identity of the unnamed group in the al.com story, we now know for sure that CBA fights certain kinds of gambling by taking money from other kinds of gambling. 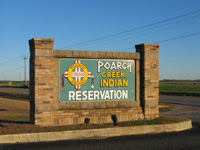 Eric Johnston's group was perhaps the most outspoken opponent of Sweet Home Alabama, the plan that would have legalized electronic bingo at VictoryLand, Country Crossing, and other sites in the state. Milton McGregor (VictoryLand) and Ronnie Gilley (Country Crossing) were among those who wound up under federal indictment. Yesterday's report indicates the Poarch Creek Indians played a leading role in bringing that political prosecution to fruition.

Let's not forget the testimony of Rep. Barry Mask (R-Wetumpka) during last summer's bingo trial. From an al.com report at the time:

Rep. Barry Mask, R-Wetumpka, testified today that VictoryLand owner Milton McGregor tried to buy his vote for a gambling bill when he promised Mask "significant help" if he voted for the bill.

But Mask conceded on cross-examination that he was the one who first mentioned his upcoming fundraiser during a conversation with McGregor. He also said the Poarch Creek Indian casino in his district likely benefited from the failure of the gambling bill.

Was Barry Mask little more than a paid chump for the Poarch Creeks? Yesterday's report indicates that Alabamians need to be asking that question.

They also need to be asking lots of questions about Mike Hubbard. Get a load of Hubbard's tap dancing when contacted for yesterday's al.com piece:

Hubbard, who was spearheading GOP efforts to win a majority in the Alabama Legislature, said he asked for assurances that the money the RSLC gave Alabama Republicans hadn't come from gambling interests.

"We were assured that none of our contributions came from gambling sources," Hubbard said.

Hubbard said an official with the RSLC disclosed to him that the group accepted gambling money as an organization.

"I told him we weren't interested in it," Hubbard said.

Hubbard said he has no control of where the RSLC got its money.

"But at the end of the day, we don't know exactly where all of their money comes from. All we know is that it came from sources that are supportive of Republican efforts to defeat the Democrats," Hubbard said.

Translation: Hubbard knew the money probably came from gaming interests, and he took it anyway.

A spokesman said the Poarch Creek tribe is nonpartisan, giving to both parties. But at least one Alabama Democrat saw through that:

House Minority Leader Craig Ford, D-Gadsden, said it's not realistic to think the Poarch money to the RSLC wasn't given to impact Alabama races.

"The RSLC is nothing more than a washing machine for the Alabama Republican Party to hide millions of dollars in contributions to state candidates," Ford said.

"The Poarch Creek Indians did not give the RSLC money for campaigns in other states. The RSLC simply took the Poarch Creek money, pretended it went to another state, sent the money back to Alabama Republican campaigns and then concealed the true source of the money," Ford said.

I'm not a federal prosecutor, but that sounds like a description for a classic money laundering operation--with Mike Hubbard in the middle of it.

Are we to believe that Mike Hubbard is going to bring "honest government" to our state? All living beings in Alabama, sentient and non-sentient, should have serious doubts about that.
Posted by legalschnauzer at 10:43:00 AM

Scott Beason, under oath in the bingo trial, stated he was shocked at how much PC Indian money was going into the Alabama GOP campaigns. He further stated on tape to his fellow GOP snakes that the Greentrack "aborigines were ya'lls Indians". Mike Hubbard's words cannot be trusted. He is one of the greediest politicians Alabama will ever know.