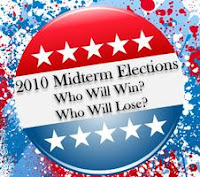 What happens when American voters, in large numbers, are out of touch with reality? We are about to find out, according to an intriguing analysis of the 2010 midterm elections. And it probably will not be pretty.

That's just one of many head scratchers that Ruy Teixeira and John Halpin present in a New Republic study titled "Job Loss and Liberal Apathy: A New Interpretation of the 2010 Election Results."

After reading The New Republic piece, one could make a strong argument that the 2010 midterms are the most glaring example of irrational voting in American history. In essence, voters blamed Obama and Democrats for something that George W. Bush and Republicans did.

If the issues at hand were not so serious, one would be tempted to guffaw upon reading the Teixeira/Halpin piece. Instead, a rational person can only shake his head and wonder if our society has become so dysfunctional that our future is imperiled.

Consider this from Teixeira and Halpin:

More voters (35 percent) blamed Wall Street for today’s economic problems rather than President Bush (29 percent) or President Obama (23 percent). But these Wall Street-blaming voters supported Republicans by 56-42 percent. The Obama administration’s association with bailing out Wall Street bankers, who are heavily blamed for the bad economy, apparently had a negative effect on Democratic performance in this election.

Actually, there were signs before the election that this was going to happen. On August 12, CBS News produced an article titled "More Americans think Obama, Not Bush, Enacted Bank Bailouts, Poll Shows."
Reported CBS News:

Just 34 percent of Americans surveyed by the Pew Research Center correctly said that TARP was enacted by the Bush administration. Almost half--47 percent--think Mr. Obama started the bank bailout, according to the survey, conducted July 1-5. There was no partisan divide on the issue.

The TARP program was created in 2008 to stabilize the financial system. The Treasury Department has committed more than $500 billion to more than 800 firms through the program. While Mr. Obama did not enact TARP, his administration has largely been responsible for administering it.

The facts are clear: TARP was created in 2008, and Obama did not take office until January 2009. Yet voters, many of them surely Tea Partiers, blamed Obama for a program that he did not create. That's like blaming Jimmy Carter for Watergate or Bill Clinton for Iran-Contra.

As CBS points out, the Obama administration has been saddled with trying to make TARP work--hence, it has been "associated" with the program. And reasonable folks certainly could debate how well Obama and Democrats have handled that task. But did Democrats create the program? Not even close. Did they cause the problems that led to TARP's creation in the first place? Nope.

Astute observers saw some time ago that TARP was going to be a political headache for Democrats. In early September, Brad Bannon of U.S. News and World Report, wrote "Bank Bailout Spawned Obama and Dems’ Tea Party Problem." From Bannon:

President Obama has almost no chance of getting Congress to approve the vital jobs initiatives he proposed this week. And the opposition to his initiatives, which are so vital to economic growth, is the residue of President Bush’s Temporary Assistance Rescue Program, which candidate Obama favored and the Democratic Congress approved. . . .

Barack Obama and congressional Democrats share in the blame for the opposition to vital economic programs that the country badly needs. The failure of Democrats to take a populist stand against Wall Street poisoned the well for President Obama’s economic agenda. When Democrats bit into the corporate apple in the fall of 2008, they created many of the problems which they are dealing with now.

The bottom line? Obama mishandled the political fallout from the bailout. But many voters who have placed their faith in Republicans actually believe Obama started the program. It can't be good for our republic when that many people are so wildly misinformed.

What else do we learn from Teixeira and Halpin? Get this: White working-class voters went overwhelmingly for Republicans. In fact, it appears that demographic, more than any other, is responsible for the result:

The most significant shift against the Democrats occurred among the white working class—defined here as whites without a four year college degree. Congressional Democrats lost this group by 10 points in both 2006 and 2008. Yet this deficit ballooned to 29 points in 2010—a deficit even larger than 22 point margin Democrats suffered in 1994. That created an awfully big hole for Democrats to crawl out of, especially given relatively depressed turnout among Democratic-leaning constituencies.

Raise your hand if you can think of anything Republicans have done for working class folks, of any color, especially over the past 30 years--when the Party of Lincoln evolved into the Party of Haley Barbour.

How does The New Republic sum it up?

What’s interesting is who voted for the Republicans and why. Independent voters, white working-class voters, seniors, and men broke heavily against the Democrats due to the economy. Turnout levels were also unusually low among young and minority voters and unusually high among groups that lean right, contributing to a midterm electorate that was extremely favorable to Republican candidates.

Was there any good news for Democrats? Maybe it's this:

The election did not appear to be a repudiation of the new health care reform law. About as many said they wanted to see it remain as is or be expanded (47 percent) as said they wanted it repealed (48 percent). Nor did it appear that voters were embracing the GOP position on tax cuts. A 52-percent majority of voters wanted to either keep only the Bush tax cuts for those under $250,000 or let them all expire compared to 39 percent who wanted to keep all the tax cuts.

Political commentators are notoriously prone to over-interpreting election results. Strategic and policy decisions certainly made some difference in the magnitude of losses, but in a horrible economy it’s difficult to escape the reality that Democrats were poised to lose a significant number of seats no matter what they did.

All of this makes me miss the late, great George Carlin. I would love to hear his take on this absurd election. To my knowledge, it was Carlin who first raised the notion that many Americans are too stupid to be entrusted with a task as important as voting. It was Carlin who uttered these immortal words:

We could use a few belly laughs. So let's enjoy a classic George Carlin rant about voting. These words really resonate today:

George Carlin was dead on & so are you, Roger. This nation has plenty of selfish, ignorant voters. If you haven't read Carlin's final book, Last Words do so. It details his optimistic, early days when he spent his spare time volunteering for a political campaign when he wasn't smoking Weed, but Carlin would soon learn that "Inside Every Silver Lining There's A Dark Cloud" when he met his new boss, Roger Ailes who produced The Mike Douglas Show four decades before he helped Fox News give the 2000 election to his cousin George W. Bush (Last Words p. 120)

Most of these Young Republicans who were swept into power in 2010 will be around for decades to usher in new Republican Presidents & Governors who will be trying their best to take our Social Security & top Nixon, both Bushes & Bob Riley. Get used to it. The dark clouds are coming. Makes me want to move somewhere in South America.

This is what happens when the MSM uses the public airways to tell voters what they want them to know, not what they need to know in order to make informed decisions.

It's the job of Faux News and Talk Radio others to keep the people dumb. This election proves it.

I heard on the XM radio today a total of 165 million dollars was spent on TeeVee ads painting Nancy Pelosi as the Wicked Witch of the West. Her crime? Fighting for the poor and the middle class.
*sigh*

"That's like blaming Jimmy Carter for Watergate or Bill Clinton for Iran-Contra."

That is funny ... or will be until we see those assertions actually made. And believed by half of American voters.

Give it a week, tops.