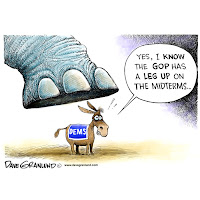 If our democracy someday collapses, historians surely will sift through the wreckage to find a date that might have signaled what was to come. It looks like November 2, 2010, might be the date they will be looking for.

Surveys show that Americans will go to the polls today and vote overwhelmingly for Republicans, possibly restoring GOP leadership in the U.S. House--and maybe even the Senate. That's like taking the guy who ransacked your house and supporting him for sheriff.

If Republicans indeed make major advances in today's midterm elections, it will be a colossal failure of both political parties and the American electorate. We fear that a democracy infected with such irrational thinking might not be long for this world.

How nutty is this talk of a possible GOP sweep? From 2000 to 2008, George W. Bush ran one of the most inept and corrupt administrations in American history. He inherited peace and prosperity from Democrat Bill Clinton and turned them into war and waste. The Bush White House failed on almost every substantive issue you can think of--the economy, foreign affairs, domestic security, justice, the environment. Bush, with the help of his fellow Republicans and conservative Democrats, brought our financial system to the edge of collapse and unleashed the worst economy since the Great Depression.

When Bush's reign mercifully ended in 2008, Americans wisely determined it was time to put adults in charge, ushering Barack Obama into the White House and putting Democrats in control of both houses in Congress.

After two years of tepid leadership from Obama, Democrats can point to at least one major achievement--they helped avoid a complete economic disaster that almost certainly would have ensued if Republicans John McCain and Sarah Palin were in charge.

The Democrats should have accomplished more. But avoiding a second Great Depression is, in itself, a major accomplishment. Unfortunately, Obama and company have failed to make that case to the American people.

That's why this is a failure of both parties. The Republican Party has devolved into such a dysfunctional mess that it is incapable of governing. Democrats, meanwhile, continue to specialize in snatching defeat from the jaws of victory.

Obama reminds me of a relief pitcher who entered a baseball game with a 14-2 lead. Fearful of challenging hitters, he decided to nibble on the corners. That caused him to walk hitters, and combined with a few big hits from the other side, he saw his lead dwindle to 14-11. Today, the other team is about to tie the game--and maybe even take the lead.

I've heard about a pitching coach who would visit the mound when one of his charges was afraid to challenge hitters and offer this bit of advice: "Babe Ruth is dead. Throw the f-----g ball over the plate!"

Yes, Babe Ruth is dead. And so is the Republican Party as a governing entity. But Barack Obama refused to throw dirt on their grave.

If today turns into a disaster for Democrats, the seeds for it probably were planted before Obama even took office. Here is how we reported it in an earlier post about Scott Brown's U.S. Senate victory in Massachusetts:

We would suggest that the seeds of last night's fiasco for Democrats were planted much earlier than that--on January 11, 2009. That's the date that ABC's George Stephanopoulos asked President-Elect Barack Obama about the possible appointment of a special prosecutor to investigate crimes of the George W. Bush administration.

Obama replied by saying that he was inclined to "look forward as opposed to looking backwards," indicating that he was willing to give Bush criminals a free pass. It was that show of weakness, buttressed by similar statements that Obama has made since then, that many Massachusetts residents probably remembered as they went to polling places yesterday.

We suspect that Obama's refusal to take a principled stand on matters of justice was the No. 1 reason Democrats lost a seat that Kennedy had held for almost half a century.

Obama's refusal to take a principled stand on matters of justice, his refusal to hold the Bush administration accountable for its myriad crimes, probably will cost Democrats again today.

We tend to think of CNBC's Chris Matthews as a pompous windbag. But we agree with Matthews' assessment that Obama has had two major failings. (See video below.):

* He campaigned as an "inclusive" candidate but has governed as an elitist;

* He failed to adequately explain to the American people how we got into our current fix--and what we need to do to get out of it. Lincoln did it in the Civil War. Franklin Roosevelt did it in the 1930s. Obama, Matthews correctly states, has failed to "take people along" with him.

Obama and his fellow Democrats had mountains of evidence that the Bush administration was a monumental failure--and bold action was needed to get us out of a hole the GOP spent eight years digging.  But Democrats, other than Bill Clinton, failed to make that case. And now they are in the pathetic position of hoping that polls under-represented likely voters who have given up land-line phones and use only cell phones. Here is how election analyst Nate Silver explains the "cell phone effect":

This one is pretty simple, really: a lot of American adults (now about one-quarter of them) have ditched landlines and rely exclusively on mobile phones, and a lot of pollsters don’t call mobile phones. Cellphone-only voters tend to be younger, more urban, and less white — all Democratic demographics — and a study by Pew Research suggests that the failure to include them might bias the polls by about 4 points against Democrats, even after demographic weighting is applied.

Do Presidents Always Get "Shellacked" in Midterm Elections?

Second, it certainly should not have held true in November 2010. Had Democrats made the case that the George W. Bush administration was an unmitigated disaster and it would take time to recover from it--an incredibly easy case to make--they should have actually gained seats across the board.

We've established that both parties have failed us, so what about the American people. In the past, when our country has been in a vulnerable position, we have found ways to look forward, to take progressive action even if it meant enduring some "growing pains." In 1964, with the country facing a possible crisis in race relations, Americans voted overwhelming for Democrat Lyndon Johnson and his plans to ensure basic civil rights for blacks.

We are facing an economic crisis today, one that has been years in the making and is nowhere near resolved. And yet voters probably will go to the polls and vote for the very people who caused the problems in the first place.

That kind of irrational thinking does not bode well for our democracy.

George W. Bush told the American People that the War on Terror would be a decades long war that would last beyond his administration. Republicans won the next two elections on the premise that we needed to give Bush plenty of time to win that war because it was so important to some vague notion of freedom. Chris Matthews is absolutely right. Barack Obama, the eloquent speaker with an IQ in the 150 to 160 range, has failed to connect with the American People like George W. Bush, a man who communicates on a 6th grade level & has only an average IQ of about 100, did.

"Barack Obama, the eloquent speaker with an IQ in the 150 to 160 range, has failed to connect with the American People like George W. Bush, a man who communicates on a 6th grade level & has only an average IQ of about 100, did."

Consider what level the American public effectively communicates at. If the baseline is 6th grade and if the IQ of the average American is taken into consideration, then ol' G.W. was perfect for the average American audience. These people soak up reality TV and pop tunes like sea sponges -- I don't think they take kindly to being led by a man who is clearly levels above them intellectually, even if they like the way he sounds.

Not saying that the vast majority of Americans are simpletons, but....well.....they are. And they are best led by a man who is just as simple (which is often mistaken for "down-to-earth", "humble" and "aww shucks") as they are. And of course that man will be led by what can be described as "the smartest men in the room". It's almost as if you can literally see the puppet strings.