Here is What Birmingham Needs In A Downtown Baseball Park

Birmingham is planning to build a downtown baseball park, and we think it's one of the neatest ideas to come from the city in years. Unfortunately, it appears the city intends to built the ballpark in the wrong location. Fortunately, we have a resident who is knowledgeable about such matters and knows exactly how the project should proceed.

The big question: Will someone in city government listen to this fellow before it's too late?

Plans call for moving the Birmingham Barons of the Class AA Southern League to a downtown site from Regions Park in Hoover. If the new ballpark is not built in the right spot, however, everyone involved would be better off leaving the Barons in the suburbs.

Over the past 20 years or so, downtown areas across the country have been revitalized with the construction of ballparks that offer both modern amenities with classic, old-timey sensibilities. The best of these parks merge a functional baseball facility with a modern cityscape, creating an environment that provides comfort, attractive sight lines, and a strong sense of place. The idea, in essence, is to mix the simplicity of a sandlot with the majesty of skyscrapers--or whatever vistas a particular city has to offer.

Many of these projects have been smashing successes, at both the major- and minor-league levels. The best of them are like baseball cathedrals, true works of art that promote both a sporting spirit and a sense of community. A few examples:

San Francisco's magnificent AT & T Park sits on China Basin Channel. No wonder the Giants won the World Series this year. Who wouldn't be inspired from playing in this place? Pittsburgh's PNC Park sits on the shores of the Allegheny River and might be the finest stadium in the history of baseball. The Pirates are an awful team, but they have a splendid place to play. In fact, the only negative I've heard about going to PNC Park is that you have to watch the Pirates play. 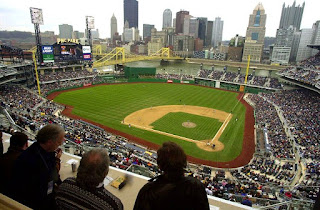 Birmingham does not have a river running through it. And we do not sit on a breath-taking bay. But for a medium-sized city, we do have an attractive skyline. And the new ballpark needs to take advantage of that.

Here's the problem: Current plans call for the new ball park to be built near Railroad Park, a 19-acre green space that opened in summer 2010. Railroad Park is probably the second neatest idea to come out of Birmingham recently, and it promises to be a major plus for years to come. But it has nothing to do with baseball, and there is no reason to connect it with the new ballpark. Railroad Park is about history, nature, and interactive activities. The proposed Railroad Park district needs to focus on those attributes.

The new baseball park needs to be viewed as a separate matter. The proposed location near Railroad Park is several blocks from the downtown district and would limit the use of the city's skyline for aesthetic purposes. The ballpark needs to be a place where citizens come to view a sporting event--and drink in the metropolitan vibe all around them. A downtown ballpark needs to be smack in the middle of DOWNTOWN.

Again, if you are going to build the baseball facility near Railroad Park, you might as well leave the Barons in Hoover. Regions Park is only 22 years old, and while it lacks the ambiance of a downtown park, it's nestled amid pine trees and remains a mighty fine place to watch a ballgame.

What to do? A Birmingham resident named Craig Krawczyk knows exactly what to do. And Mayor William Bell and the Birmingham City Council need to be listening to him.

Krawczyk is an architect with Birmingham-based Live Design Group. Long fascinated with sports venues, Krawczyk, on his own, drew up a full design for a baseball park in Birmingham--one that would be in the Civil Rights district, in the midst of downtown. "I just thought it would be a fun thing to do, something to play around with at night," he said.

What Krawczyk came up with is a stroke of genius--exactly what Birmingham's downtown ballpark needs to be, where it needs to be. Wrote The Birmingham News, in a profile of the architect:

His plans feature details such as an event space with a view of the ballfield and a sculpture garden that links to the Birmingham Civil Rights Institute.

But the design is more than just pie-in-the-sky ideas.

Krawczyk considered practical needs for the project, including logistics for visitors and ways the facility would mesh with the rest of downtown.

While most of the buzz about a new downtown ballpark centers on a site near Railroad Park, Krawczyk said he sees benefits in having it closer to downtown offices and the Civil Rights District.

Krawczyk's design is both a practical and an artistic winner:

"It's pretty close to the Civil Rights Institute to take advantage of all the parking structures over there, and it's within walking distance of the basic business core, so business people can bring clients and walk over for the afternoon," he said.

It's also close to the Alabama Theatre and the McWane Science Center, which is good for families and others who want to fill up an entire day with downtown activities, he said.

"I didn't want it to be completely hypothetical," he said. "I wanted it to have somewhat of a client, with real-world parameters."

From what we understand, Krawczyk has not spoken with anyone at City Hall. But he and his colleagues at Live Design Group need to get involved in this project, pronto. They know what they are doing.

Consider the photo below of the architect with a rendering of his design. Notice how it incorporates the city's skyline beautifully into the overall scenario. Front and center would be the Regions Harbert Plaza, which is Birmingham's most attractive modern building--and to my untrained eyes, one of the most attractive buildings of its kind anywhere. 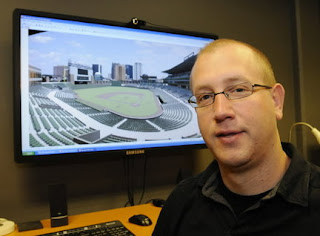 Downtown Birmingham features an attractive, modern skyline, along with a number of timeless buildings that have made up the city's core for decades. Krawczyk's design is an ideal blending of the city's past, present, and future.

It would put Birmingham on par with baseball-based projects that have energized downtowns across the country.

Birmingham often has needed outsiders to help it move forward. Krawczyk is that kind of guy. He grew up in Ohio and remembers attending a Cleveland Indians game when he was about 5 years old. "I couldn't tell you anything about the game itself, but I remember going to that stadium and being in awe of the place," he said. "I think I spent more time looking at the building than watching the game."

What impact have baseball parks had in other cities? Consider just a few examples:

Autozone Park in Memphis is considered by many to be the finest minor-league ballpark in the country. It is home to the St. Louis Cardinals' Class AAA team: 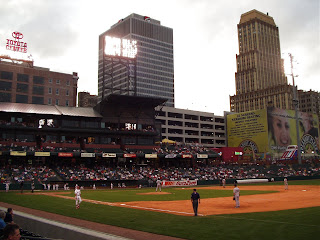 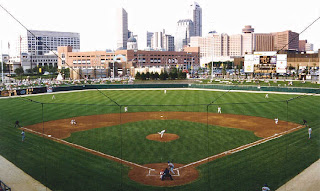 Fifth Third Field has become an attractive home for the Class AAA Toledo Mud Hens, the team Corporal Max Klinger made famous in M*A*S*H. Like the Birmingham Barons, the Mud Hens had played at a suburban stadium before their move downtown: 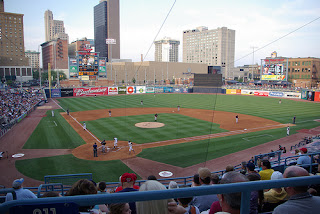 In the 30-plus years that I have lived here, the Birmingham Civil Rights Institute undoubtedly is the most significant project to take shape downtown. But in terms of grand scope and potential long-term impact, the downtown ballpark becomes No. 1. It's critical that the project be done the right way. And Craig Krawczyk is the guy who needs to lead the effort. Let's check out an interview with the architect:

Autozone is a great minor league park, but . . . and it's a big but . . . parking and the surrounding area are very much a detriment. Walking past a run down motel inhabited by folks who look like they are up to no good and past the Greyhound bus terminal is a real turn off, especially to families. Result: the owners have been unable to make their bond payments for more than two years and are looking for a buyer.

If Birmingham wants this to succeed, they MUST provide a safe environment for families and one that feels and looks safe. It can be great for the city if done right, but if not, it will turn into the disaster Memphis has: a great ballpark that cannot attract crowds because they didn't finish the job by cleaning up the immediate surrounding area to make it safe and inviting.

The Momtgomery biscuits stadium is a nice one too.