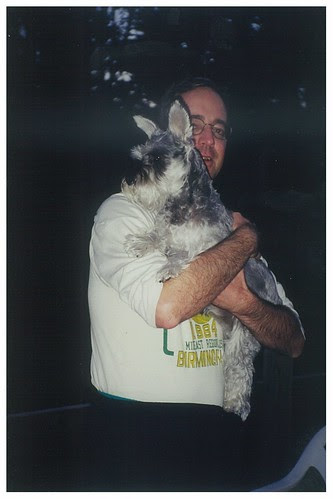 This is Murphy and yours truly (back when I had brown hair and a job) on our deck.

I like this picture a lot because it shows how pretty Murphy's coat was. And Mrs. Schnauzer deserves the credit for that.

For one thing, it was Mrs. Schnauzer's idea to make Murphy mostly an indoor dog. Schnauzers love fresh air and exercise, and we took Murphy on one or two nice walks every day. Also, she spent a good bit of time on our deck. (She almost stumbled through the slats in her puppy stage, and we promptly put up a safety screen.)But making her mostly an indoor dog helped keep her clean--schnauzers have wiry coats that attract leaves and yard debris--and that seemed to make her even more a part of the family.

Actually, she smelled a lot better than we do. No wonder we liked having her nearby all the time.

I guess you could say I was Murphy's play pal and walk scheduler. But Mrs. Schnauzer took care of how she looked. That included brushing her regularly and getting her bathed and groomed every six to eight weeks. (A tip: We didn't bathe Murphy between groomings, and we think that helped keep her coat healthy. Bathing a dog too much can remove the coat's luster.)

My wife's routine apparently worked. Murphy always seemed to feel great, and she had the best smell I've ever encountered--kind of like fresh laundry, only better. We've often joked that Murphy might have been the only dog ever whose humans sniffed her more than she sniffed them.

If heaven has a smell, my guess is it smells something like the Murph's coat.
Posted by legalschnauzer at 10:05:00 AM