Was shot into David Roberson's vehicle an assassination attempt, designed to silence him over a lawsuit against Drummond and Balch Bingham?

The plaintiff in a $75-million lawsuit against Drummond Company and the Balch Bingham law firm was driving south on U.S. 280 near Birmingham on Friday when someone fired a shot into his vehicle.

Former Drummond executive David Roberson escaped shaken, but apparently unharmed. Details about the incident are scarce at the moment, but Roberson reported it to law enforcement. This marks the second time someone connected to the lawsuit has met with violence that apparently was designed to intimidate, severely injure, or kill. Burt Newsome, attorney for Roberson and his wife Anna, was hit head-on in a crash where the driver of an SUV appeared to veer directly into Newsome's Volkswagen Jetta. Newsome sustained a broken leg, which required insertion of a titanium rod during trauma surgery at UAB, along with other injuries. 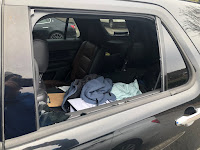 These incidents, taken together, raise all kinds of unsettling questions. Was the shot at Roberson an assassination attempt, one that barely missed its target? What about the Newsome crash? Just how thuggish and contemptible are those in the Drummond and Balch hierarchies? Would they actually stoop to murder -- perhaps the hiring of a hit man -- because of a civil court matter? Is anyone in law enforcement going to conduct a serious investigation of these events. We are not aware of any real investigation into the Newsome crash, so one must wonder: Is the Roberson shooting going to be blown off, too? Is anyone in the corporate or legal communities going to speak out about such debased behavior? What about political leaders?Are they OK with life in Alabama looking like a scene from The Godfather?

The shot at Roberson blew out the left rear window on his vehicle, right behind the driver's seat. It came on the same day that Newsome filed documents in the trial court indicating Drummond had lied in responses to discovery. Roberson is seeking attorney fees and other expenses associated with discovering the truth (More on that in an upcoming post.) This is from a report at banbalch.com:

Sometimes we feel we are living in a John Grisham novel.

As ex-Drummond Company executive David Roberson was driving along Highway 280 in Shelby County on Friday morning, someone apparently shot out his rear driver’s window in an alleged assassination attempt.

Roberson was driving to his lawyer’s office.

And what was Roberson dropping off?

A slew of documents that appear to show Drummond Company and its General Counsel Blake Andrews lied in civil court pleadings. Roberson appears to have been the “fall guy” who allegedly was set up.

Drummond Company CEO Richard Mullen and Southern Company CEO Tom Fanning need to have a “come to Jesus” meeting and stop the uncontrolled behavior by their subordinates. 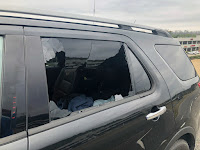 The ramifications of the misconduct, alleged cover-up, alleged obscuring of documents, and alleged manipulation of the prosecution in the North Birmingham Bribery Scandal by their subordinates is boiling over and could lead to additional criminal investigations.

The photos of Crosswhite slamming back cocktails with disgraced U.S. Attorney Jay E. Town, allegedly during the height of the North Birmingham criminal trial, are now even more significant.

The “confusion” of Blake Andrews appears to be a crock, a lie, as Roberson was allegedly set up.

David Roberson is shaken up, scared, and rightly so.

With glass blown exclusively inside the car, the projectile was obviously aimed at the driver’s side and missed Roberson’s head by inches.

Why would anyone truly try to silence Roberson at this juncture?

Just days before Friday’s shooting, we reported about the most foolish and puzzling act by attorneys for Drummond Company: the asking of Roberson about bribes that have nothing to do with his lawsuit.

What other secrets does Roberson know?

As we wrote about in July of 2019, Roberson could sing to the feds and let them know about bribes and other alleged crimes and misdemeanors.

Now with shattered glass in his back seat, Roberson may be obligated to tell the truth, the whole truth, and nothing but the truth.

God help us all! 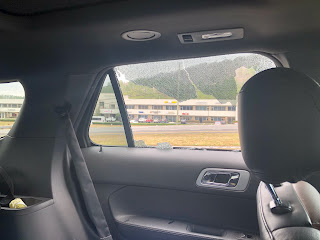