Johnny Dollar: How a self-serving governor and a wretched justice system took down the man who built Alabama's most successful insurance company (Part 2) 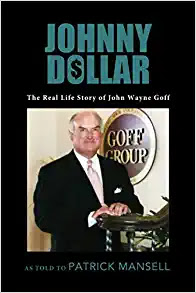 With his favored candidate in the governor's office, one might have thought John Goff's problems would begin to dissipate. Heck, Goff had even allowed Bob Riley's campaign to use his company jet. But even that -- maybe especially that -- blew up in Goff's face and left his insurance empire in tatters.

One of  the Riley administration's early moves was to have its Department of Insurance (DOI), under Commissioner Walter Bell remove Goff Group as administrator of the state's worker's comp risk pool. Goff's attorneys filed a lawsuit against the state and convinced Goff to include Bob Riley as a defendant. This posed the threat of forcing Riley to testify under oath about his alleged ties to Jack Abramoff, Michael Scanlon and Mississippi Choctaw gaming money.

Soon, Goff was under attack from several angles. It is believed XL reached an agreement with the DOI and Walter Bell to dig up dirt on Goff, with the DOI helping XL in its ongoing litigation. Writes Mansell:

On July 2, 2004, while the suit with XL was being litigated, the DOI filed an administrative complaint against Goff and his company, alleging they collected more than $800,000 from Alabama customers and agents without passing the money along to companies that were actually writing the insurance. The 60-count complaint was based on false information provided by XL. . . . The Department, by participating in the scheme to destroy Goff caused the rupture of his business and his reputation.

When Goff's attorneys advised the DOI that they intended to expose Bell and other officials, Bell resigned and the department abruptly agreed to settle the administrative complaint against Goff. The DOI agreed to drop 59 of 60 counts if Goff would plead guilty to a minor charge of "failure to respond in a timely manner" to a DOI letter. The agreement stipulated that this was a civil matter, and Goff was not to be charged criminally. Goff signed the agreement with the understanding the matter was permanently settled, and he was free from any potential future criminal charges. But that is not how things worked out. Goff's lawsuit against the state, Bob Riley, and others had set off fireworks. And Riley used the U.S. Justice Department to fight back.

Leura Canary, wife of long-time Riley supporter Bill Canary (head of the Business Council of Alabama, BCA), already had helped take down Riley opponent Don Siegelman -- so she was used again against Goff. The Goff lawsuit threatened to expose a number of Republican heavy hitters, including Bob Riley, Mike Scanlon, Jack Abramof, Bill Canary, Karl Rove, and others. As Mansell writes: "That was simply unacceptable. John Goff had to be stopped."

With that goal in mind, Leura Canary's investigators went back to Goff's dispute with ECS and XL/Greenwich, which had been settled via arbitration five years earlier. The DOI had agreed the matter was settled, was civil in nature, and Goff was not to face criminal charges. But Canary's federal office chose to ignore that ruling. Indicting Goff, attorneys later argued, was a clear case of double jeopardy. And Leura Canary proceeded despite glaring conflicts. Writes Mansell:

Membership in the BCA granted exclusive access to the Alabama Self-Insured Workers' Compensation Fund Inc. John was a competitor for Bill Canary's BCA workers' comp business. By attacking John and locking him up, Leura Canary would be able to silence his outrage at the governor's involvement in the shakedown of his business, and it would also serve to eliminate the competition John posed for her husband's BCA workers' comp pool. . . . Leura Canary was a uniquely conflicted prosecutor.

The jury convicted Goff of embezzling funds from an insurance company, conspiracy to commit mail fraud, and providing false documentation to a state agency. The trial included so many oddities that Judge Myron Thompson encouraged the defense to appeal right away because many issues could be attacked at the appellate level. If that was the case, why didn't Thompson declare a mistrial? That question remains unanswered.

The appeal was unsuccessful, and Goff's 12-year sentence stood. Goff's first stop in the penal system was the notorious Federal Detention Center Atlanta. Many inmates say it is the last place they want to go. They are on lockdown for 23 hours a day, with no TV, no books, and food that has been described as "unrecognizable."

After about two weeks in Atlanta, Goff's next stop was Oklahoma City, where the prison was controlled by gangs. Then came Oakdale, LA, where Don Siegelman spent much of his prison time. It, too, was infested with gangs. But it did have a side benefit:

Oakdale was fortunate to have a few very talented black singers in its population. They would perform at the chapel every week, and this was a highlight for John. If he closed his eyes he could imagine he was listening to the Drifters. These guys were that good.

Finally, Goff was sent to the Federal Prison Camp Pensacola. It was about as pleasant as a U.S. prison can get:

Goff made it  a point to watch the prison's intramural baseball games, which tended to draw big crowds. Why?

In the camp were three professional baseball players, all there for drug convictions. One player was from the Boston Red Sox, another was from the Cleveland Indians, and the other played for the Atlanta Braves. Watching these men play was like watching a ballet. They could move like lightning. Every catch and throw was perfect. They elevated the game to a much higher level.

The Pensacola population was a diverse group:

There were professors, hedge-fund managers, surgeons and psychiatrists, politicians, business owners, bankers, and attorneys. There were artists, musicians, writers, and CPAs. There were even a couple of circuit-court judges.

Aside from being in prison, inmates at Pensacola had to deal with other unpleasantness:

Pensacola had a minor alcohol problem, but it had a big drug problem. Much of the drugs came through work details. And Pensacola's drug problem was to be taken seriously. The drug of choice was K2, a psychedelic, or better said, psychotic. Rarely did a month go by when an inmate did not completely wig out on that drug.

In December 2018, Congress passed the First Step Act. Through that, Goff was released to home confinement on Sept. 30, 2019. In all, Goff was incarcerated for eight years. Acquaintances often ask Goff how he survived prison. Perhaps that is best answered by the last chapter of his book, which is devoted to family and friends who sustained him with their visits and encouragement.

That ends the book on a hopeful note. But the John Goff story is undeniably distressing. Any misdeeds he committed (if he committed any at all) almost certainly were settled in the civil environment and never would have been prosecuted criminally, except for Bob Riley's insecurities and vindictive nature.