The cold, hard numbers tell a story many Americans don't want to hear: The economy is stronger under Democratic presidents than under Republicans 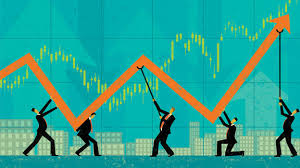 One of the persistent myths in American society is that our economy tends to be stronger under Republican presidents than under Democrats. An item from a New York Times e-newsletter shows the myth is wildly wrong-headed. Writes David Leonhardt:

Has the economy fared better under Democratic presidents or Republican presidents over the past century? The sensible answer might seem to be: It’s probably been similar.

Another chart shows five of the top six annual GDP growth rates have come under Democrats -- Roosevelt, Kennedy, Johnson, Clinton, and Carter. Reagan is the only Republican in the top six. Why the gap?

The gap exists not only for G.D.P. and jobs but also for incomes, productivity and stock prices. The gap also exists if you assume that a president’s policies affect the economy with a lag and don’t start his economic clock until months after he takes office. Virtually any reasonable look at the data shows a big Democratic advantage.