Alabama Power helped finance robocalls promoting pro-Trump Stop the Steal rally that turned into a bloody and deadly insurrection at the U.S. Capitol 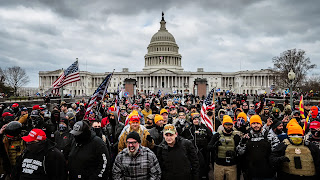 During the 2019-2020 election cycle, the single largest contribution from Alabama Power Employees Federal PAC went to the Rule of Law Defense Fund, the entity that launched robocalls the day before the insurrection mob marched to and desecrated the U.S. Capitol.

The robocall stated, “The March to Save America is tomorrow in Washington, D.C….At 1:00 p.m., we will march to the Capitol building and call on Congress to stop the steal,” according to The Washington Post.

Mark. A. Crosswhite, the Chairman and CEO of Alabama Power, boasted in 2016 that he enjoys being the final decision maker as the leader of the utility.

Did he make the final decision to funnel $25,000 to this entity or will he blame others?

As many Americans still struggle to digest the horror show that erupted on Jan. 6, they now learn that one of Alabama's most powerful corporate entities helped finance the mayhem. Writes Forbes:

The insurrection mob led to the out-of-control breach of the U.S. Capitol where the building was vandalized and feces allegedly was spread on some walls.

U.S. Capitol Police Officer Brian Sicknick was pepper sprayed twice and later died. According to news reports, Capitol Police said that Sicknick had “passed away due to injuries sustained while on duty.”

Sicknick was one of five individuals to die during the violence:

Lying in honor in the Capitol Rotunda, Sicknick received a final tribute from lawmakers from both sides of the aisle, including President Joe Biden and the First Lady.

How did Crosswhite and Alabama Power get associated with this egregious and deadly mess?

The answer appears to run through the Alabama Attorney General's Office, reports Forbes:

Alabama Power funneled the large donation because the Rule of Law Defense Fund was run by the Republican Attorney Generals Association (RAGA) whose Chairman is Alabama Attorney General Steve Marshall, a political ally of both Alabama Power and their sister-wife, embattled law firm Balch and Bingham.

But the truth will come out as investigators probe more deeply. Speaker of the House Nancy Pelosi yesterday called for the creation of a 9/11-style commission.

“To protect our security, our next step will be to establish an outside, independent 9/11-type commission” to “investigate and report on the facts and causes” surrounding the riots that she has characterized in her statement as a “domestic terrorist attack” upon the Capitol complex and the “interference with the peaceful transfer of power.”

Here is another Alabama connection to this ugliness: Jessica Medeiros Garrison, one-time campaign manager for former state AG Luther Strange, was  president and senior advisor of the Rule of Law Defense Fund from 2014-16. She was senior advisor and executive director of RAGA from 2011-16.

How gross will the stain on Mark Crosswhite appear?

Called “the most powerful man in Alabama” by his admirers, Crosswhite and his apologists may try to say that he has no control over what the Rule of Law Defense Fund did.

But Crosswhite has absolute control over what he did not do in the aftermath.

Crosswhite’s inaction proves he is unfit to lead. He should resign or retire and Wall Street must demand so.

In the meantime, another probe of Alabama Power and their web of patronage and interference is needed, now, today.

The many years of political patronage, influence peddling, and absolute power in Alabama culminated in a deadly domestic terrorist attack on Capitol Hill.