American Kompromat: Craig Unger's new book shows how KGB groomed Donald Trump as a Russian asset by appealing to his taste for sex, money, and graft 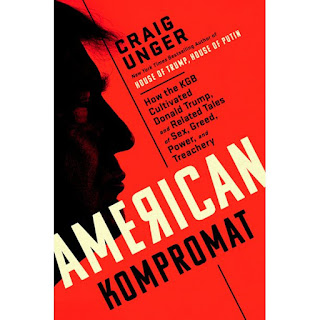 The KGB began grooming Donald Trump as a Russian asset almost 45 years ago, according to a book out this month. Craig Unger, a former contributing editor at Vanity Fair is the author of American Kompromat: How the KGB Cultivated Donald Trump, and Related Tales of Sex, Greed, Power, and Treachery (Dutton, Jan. 26). From an article by Caroline Howe at dailymail.com:

Donald Trump was cultivated as a Russian asset more than 40 years ago which exploded into a decades-long 'relationship' of mutual benefit to both Russia and Trump, a shocking new book claims.

Trump was rescued multiple times from bankruptcies by boatloads of Russian cash laundered through his real estate in the 80s and 90s, the author asserts. Russian money also picked up the tab for buildings franchised under Trump's name.

An invitation to Russia by a high-level KGB official in 1987 under the guise of a preliminary scouting trip to build a Trump hotel in Moscow, was in fact 'deep development' by KGB handlers that furthered creating secret back channels and allowed the Russians to influence and damage American democracy, the author claims.

When Trump became President, it was time to pay the piper and Trump gave Putin everything he wanted, the author writes.

Author Craig Unger makes the revelations in his new book, American Kompromat, How the KGB Cultivated Donald Trump, and Related Tales of Sex, Greed, Power and Treachery.  Unger is a journatist and author of six books, including the New York Times bestsellers House of Bush, House of Saud, and House of Trump, House of Putin. [Unger also wrote Boss Rove, which focuses heavily on the Don Siegelman case in Alabama.]

Unger addresses a question that has swirled around Trump since he became president in 2016:

Asking if Trump was a Russian asset is the single most important question about the president, the author writes after extensive interviews with high-level sources, Soviets who defected, former CIA officers, FBI counter-intelligent agents, lawyers and more.

'This is a story of dirty secrets and the most powerful people in the world' and Unger reveals what went wrong in the numerous congressional investigations into Trump.

Trump and the Russians were also in bed together through Trump's close friendship with Jeffrey Epstein, who was supplying the Russians and Silicon Valley with underage girls, the author claims.

Epstein claimed to have introduced Melania to Donald when Donald was partying with Epstein's 'girls'.

Epstein had made videotapes of sexual acts that he could use for blackmail or kompromat – compromising material - and photos of Trump with a bevy of young girls and girls giggling at the semen stains on Trump's pants when in the company of the under eighteen-year olds and he couldn't hold back his 'excitement'.

What drove the Trump-Russia alliance?

Trump's association with Russia began in 1976 when he decided to make his move from developing real estate in Queens to Manhattan.

Under the tutelage of the 'Mafia lawyer and dark satanic prince of the McCarthy era', Roy Cohn, who tutored Trump on how to find generous tax abatements, the brash real estate developer paid one thin dollar to buy the old decrepit Commodore Hotel that sat next to Grand Central Station on 42nd and Park Avenue.

The development of that decaying monstrosity into the Grand Hyatt New York offers the key to Trump's first encounter with the Russians when he went downtown to Joy-Lud Electronics at Fifth Avenue and 23rd Street to buy hundreds of television sets for his new hotel.

Store co-owner Semyon 'Sam' Kislin, was a Ukrainian Jew who emigrated to Manhattan from Odessa in 1972 and hung a sign on his store's front door reading, 'We speak Russian'.

Kislin co-owned the store with another Soviet émigré Tamir Sapir and sold electronic equipment to Soviet diplomats, KGB officers and Politburo members returning to the Soviet Union because it had all been adapted to PAL, technical standards used in Europe and Russia.

Jud-Lud was the only place to buy electronic equipment and consumer goods to take back to the Soviet Union.

Trump picked up the TVs on credit and paid Kislin back in 30 days, an unusual move for the man well known for stiffing his vendors. . . .

Kislin's store, under the KGB seal of approval was 'used by the KGB to initiate overtures to prospective assets'.

So Trump was under the watchful eye of the KGB. But that had begun years earlier when the 'young, vain, narcissistic and ruthlessly ambitious real estate developer' sold multimillion-dollar condos to the Russian Mafia laundering money by buying through anonymous shell companies.

The sale of these condos made Trump rich again after losing billions of dollars when his Atlantic City casinos went belly up.

Surveillance of Trump began even earlier in 1977 when he married Ivana Zelnickova, a Czech national from a district where the secret police force was in league with the KGB and Trump was already talking about wanting to be president one day.

What made Trump attractive to the KGB? It's not a pretty picture:

Trump probably also appealed to the KGB because he was 'vain, narcissistic, highly susceptible to flattery and greedy'.

'Deeply insecure intellectually, highly suggestible, exceedingly susceptible to flattery, Trump was anxious to acquire some real intellectual validation - and the KGB would be more than happy to humor him,' the author added.

Kislin denied any ties with the Russian Mafia years later but hung in close to Trump and donated more than $40,000 to Rudy Giuliani's 1993 and 1997 New York mayoral campaigns.

The file on Trump with the Soviet/Russian intelligence went from laundering money through Trump luxury condos, to partnering with wealthy Soviet émigrés in franchising scams, to becoming involved in countless financial irregularities, to creating secret back channels with the Russians, to partying with Jeffrey Epstein, and on and on,' writes Unger.

Epstein, whose father had been a municipal parks department employee in Coney Island, amassed hundreds of millions of dollars, owned fabulous homes around the world and lived two short miles from Trump's Mar-a-Lago estate in Palm Beach.

Within his house there were scores of women and young girls, dozens in their teens who were passed around like party favors by Epstein with the help of one time girlfriend Ghislaine Maxwell -- to the world's most powerful men.

'All the while, he was secretly recording their activities, the tapes of which provided a hammerlock of kompromat, leverage, and influence', Unger writes.

It was a world of unimaginable decadence – gorgeous young women, private planes, spectacular residences – and sex with young girls.

Billionaire oligarchs shipped in teenage girls from Russia and the Ukraine.

Russian models and beauty pageant contestants were flown in and manipulated for sexual favors by Epstein with Ghislaine as his fixer, the author claims.

Trump fit in and he reciprocated Jeffrey and Ghislaine's invites.

How so? Again the picture isn't pretty:

Twenty-eight young women were flown in to Mar-a-Lago for a calendar girl competition and the only two males guests were Trump and Epstein.

Trump was known for nonstop groping as well as putting his hands up the skirt of the girlfriend of the organizer of the calendar girl competition – all the way to her crotch.

Christina Oxenberg, daughter of Princess Elizabeth of Yugoslavia and sister of Dynasty star Catherine Oxenberg, met Ghislaine when Ghislane was knitting together a social network that introduced Bill Clinton and Prince Andrew to Epstein.

Christina said her mother had an affair with JFK in 1962 and suggested she was President Kennedy's love child.

'Ghislaine was the woman behind the world's greatest Rolodex – and all about power and money', stated Oxenberg.

When the FBI raided Epstein's homes, 'they found video recording equipment, hard disks and evidence of kompromat – videos of billionaires in the act of pedophilia, raping underage girls, committing crimes that could lead to hard time'.

Trump's name was in Epstein's black book with no fewer than 16 phone numbers.

'Trump Model Management was very much a part of Epstein's picture and allegedly indulged in many of the dubious practices – violating immigration laws and illegally employing young foreign girls,' the author writes.

Epstein took the fifth when asked if he ever socialized with Trump in the presence of females under eighteen.

Epstein claimed he was the one who introduced Melania to Trump.

'Jeffrey and Ghislaine knew Trump's secrets, and he knew theirs – secrets were the ultimate currency in the decadent and highly transactional world they lived in,' the author writes.

After 17 years of friendship, the close friends permanently fell out in 2004 when Epstein told Trump that he was keen on buying a spectacular mansion in Palm Beach being sold out of a bankruptcy auction.

With his heart set on the property, he wanted to make one change – move the swimming pool. So he brought his pal Trump to the property for advice.

In financial straits with his bankruptcies in Atlantic City, Trump outbid his friend with an offer of more than $41 million.

Trump put the house up for sale shortly thereafter for $125 million.

Enraged, Epstein never spoke to Trump again but showed around photos of Trump with topless young girls and one photo with semen stained pants.

After three years into Trump's presidency, the curtain was pulled back and revealed 'Trump was a sociopath who had given false or misleading statements more than 20,000 times while in office and created false narratives that Russia had interfered in the 2016 election on Trump's behalf.'

As for the coronavirus pandemic, it barely scraped Trump's radar:

When it came to 2020 and the president's daily briefings on the rapidly expanding Covid-19 pandemic as early as January that Trump never read, 'He did next to nothing when it came to stopping the spread of the virus', writes Unger who calls it 'a death cult'.

Deceit was the new norm with Trump's lies that were anti-science and free of reason – 'that killed hundreds of thousands of Americans'.

'The pandemic was being handled by a superstitious, science-defying authoritarian leader who had decided to let the people fend for themselves – and die accordingly,' the author writes.

The nation was now in free-fall - thanks to the 'vulgar and vile, misogynistic, racist firebrand' - who had mesmerized tens of millions with 'anti-science based policies that led to the deaths of hundreds of thousands of Americans'.

'The Russians had undermined the US elections in 2016 and Trump had collaborated with them', writes Unger. And now thanks to the virus, everything wrong with the United States – sex trafficking, racism and greed -  was visible.