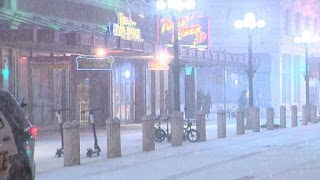 Is a winter storm in Texas providing new evidence that the postmodern Republican Party simply cannot govern? It sure looks that way. From a report at The Washington Post:

When it gets really cold, it can be hard to produce electricity, as customers in Texas and neighboring states are finding out. But it’s not impossible. Operators in Alaska, Canada, Maine, Norway and Siberia do it all the time.

What has sent Texas reeling is not an engineering problem, nor is it the frozen wind turbines blamed by prominent Republicans. It is a financial structure for power generation that offers no incentives to power plant operators to prepare for winter. In the name of deregulation and free markets, critics say, Texas has created an electric grid that puts an emphasis on cheap prices over reliable service.

It’s a “Wild West market design based only on short-run prices,” said Matt Breidert, a portfolio manager at a firm called Ecofin.

And yet the temporary train wreck of that market Monday and Tuesday has seen the wholesale price of electricity in Houston go from $22 a megawatt-hour to about $9,000. Meanwhile, 4 million Texas households have been without power.

A Wild West approach to energy? Turns out that's not such a great idea in the postmodern era:

One utility company, Griddy, which sells power at wholesale rates to retail customers without locking in a price in advance, told its patrons Tuesday to find another provider before they get socked with tremendous bills.

The widespread failure in Texas and, to a lesser extent, Oklahoma and Louisiana in the face of a winter cold snap shines a light on what some see as the derelict state of America’s power infrastructure, a mirror reflection of the chaos that struck California last summer.

Edward Hirs, an energy fellow at the University of Houston, said the disinvestment in electricity production reminds him of the last years of the Soviet Union, or of the oil sector today in Venezuela.

“They hate it when I say that,” he said.

Texans have come face to face with some harsh realities:

The immediate question facing the Texas power sector is whether its participants are willing to pay for the sort of winterization measures that are common farther north, even for a once-in-a-decade spell of weather.

“Far too many Texans are without power and heat for their homes as our state faces freezing temperatures and severe winter weather,” he said in a statement. “This is unacceptable.”

He said he would work with the legislature to find ways to “ensure that our state never experiences power outages like this again.”

The Republican speaker of the Texas House, Dade Phelan, announced immediate hearings into “what went wrong.”

Fossil fuel groups and their Republican allies blamed the power failures on frozen wind turbines and warned against the supposed dangers of alternative power sources. Some turbines did in fact freeze — though Greenland and other northern outposts are able to keep theirs going through the winter.

The Post reports: Wind accounts for just 10 percent of the power in Texas generated during the winter. And the loss of power to the grid caused by shutdowns of thermal power plants, primarily those relying on natural gas, dwarfed the dent caused by frozen wind turbines, by a factor of five or six.

So, what did go wrong? Will Englund reports:

As the cold hit, demand for electricity soared past the mark that ERCOT had figured would be the maximum needed. But at a moment when the world is awash in surplus natural gas, much of it from Texas wells, the state’s power-generating operators were unable to turn that gas into electricity to meet that demand.

In the single-digit temperatures, pipelines froze up because there was some moisture in the gas. Pumps slowed. Diesel engines to power the pumps refused to start. One power plant after another went offline. Even a reactor at one of the state’s two nuclear plants went dark, hobbled by frozen equipment.

“At a time when the need is the greatest it’s ever been, it’s a strain on the system like we’ve never seen,” said Tom Seng, director of the School of Energy Economics, Policy and Commerce at the University of Tulsa.

Throughout the Southwest, he said, there has been a scramble for gas as sources have gone offline. Most surplus gas is stored underground, he said, and bringing it to the surface becomes more and more difficult in such prolonged low temperatures. March futures for natural gas are selling for $3 per million BTUs in Oklahoma, he said, but the spot price hit $600 over the weekend.

In Texas, production of natural gas Tuesday fell 6 billion to 7 billion cubic feet per day from earlier in the month, Anne Swedberg Robba, head of American gas and power analytics for S&P Global Platts, wrote in an email. Nationally, production has dropped by about 14 percent.

“But this is not the first time we’ve had this issue in Texas,” said Hirs, of the University of Houston.

There was a severe cold spell in the Southwest in 2011, and frigid weather in 1983, 1989, 2003, 2006, 2008 and 2010. A study by the Federal Energy Regulatory Commission and the North American Electric Reliability Corp. of the 2011 event, which also led to widespread blackouts for much the same reasons, found that “the massive amount of generator failures that were experienced raises the question whether it would have been helpful to increase reserve levels going into the event. This action would have brought more units online earlier, might have prevented some of the freezing problems the generators experienced, and could have exposed operational problems in time to implement corrections before the units were needed to meet customer demand.”

Texas is unique among the states in having a grid all its own that is almost entirely cut off from the rest of the country. That has prevented Texas from importing much electricity as its power plants went down, but Hirs said that the cold is so widespread across the heart of the nation that no one has any electricity to spare anyway.