Indictment of former Huntsville defense contractor Paul Daigle has connections to Russia, Mueller, Balch and Bingham law firm, and the war in Afghanistan 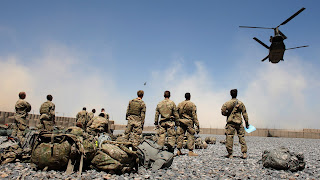 The indictment Tuesday of the former CEO at a Huntsville defense contractor appears tied to a Birmingham advocacy group's calls for an investigation of the firm's ties to Russia and the scandal-plagued Balch and Bingham law firm.

Paul Daigle, once CEO of Black Hall Aerospace, faces multiple charges related to fraud and conspiracy. Black Hall was a one-time lobbying client of Balch and Bingham. From a report at wbrc.com:

A former chief executive officer was charged in connection to schemes to defraud the United States Government in relation to the conflict in Afghanistan.

According to officials at the U.S. Department of Justice, 40-year-old Paul Daigle was charged with conspiracy, four counts of wire fraud and four counts of false claims in the  indictment.

According to a release from the U.S. Department of Justice, Daigle was the CEO of a company based out of Huntsville. The company served as a subcontractor on U.S. Department of Defense aviation contracts related to the war in Afghanistan.

The Huntsville business has not been released at the time.

To learn the company's  name, which is missing in the Department of Justice press release and all the mainstream media (MSM) reports we've seen, you must turn to banbalch.com, a Web site published by the public charity and advocacy organization Consejo De Latinos Unidos (CDLU). K.B. Forbes, CEO of CDLU and publisher of Ban Balch, writes under the headline"CDLU Provoked Probe: Ex-CEO of Balch and Bingham Client Charged With Afghan War Contract Fraud":

Late last year, we wrote an update about Black Hall Aerospace, a former Balch and Bingham client, that looked like it was headed to extremely turbulent waters. We wrote at the time:

[We] learned from our sources that Black Hall Aerospace allegedly is still being probed by the U.S. Department of Justice.

Could this dispute have been caused by a forensic audit or the alleged probes by the Office of the Inspector General of the U.S. Department of Defense and Military Criminal Investigations Command?

Our sources also confirmed that Paul Daigle, who has ownership in the aerospace company, has left as chief executive officer; and that Oleg Sirbu, the Soviet-immigrant that wrangled with Daigle and others in an ugly civil-court fight to control Black Hall, has settled all civil matters and is living comfortably in Dubai.

CDLU's involvement in the Black Hall Aerospace story dates to the early days of the Robert Mueller investigation. Writes Forbes:

On May 18, 2017, the day after Robert S. Mueller III was named Special Counsel of the U.S. Department of Justice, we, the CDLU, sent him a letter that included this about Black Hall Aerospace:

The revenue growth at the Russian-linked aerospace company has been enormous and raises serious concerns and questions. According to an online publication, the Russian-linked company, AAL USA, Inc. and/or Black Hall Aerospace, Inc., went from generating $6.5 million in 2014 with 15 employees, to over an estimated $100 million in 2016 with 450 employees. Likewise, according to a court filing on aviationintelligence.org,  AAL USA Inc. had less than $1 million in revenue with fewer than 20 employees in 2014 but grew to over 400 employees and $50 million in revenue by 2016.

Something smells awful in this whole affair and we hope that you, Mr. Mueller, will take a deep and closer look.

Where does the story stand now? Forbes reports:

Three years and 6 months after we originally wrote to Mueller, the shoe finally dropped.

Now we hope, federal investigators will look at why Balch and Bingham scrubbed their website of any references to having successfully changed Russian sanctions on behalf of Black Hall Aerospace.

Balch and Bingham lobbyists trotted Paul Daigle office to office on Capitol Hill earning over $300,000 in fees from Black Hall Aerospace and its affiliates between 2014 and 2016.