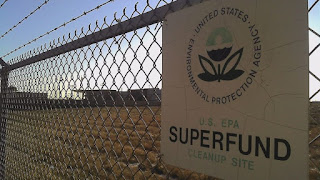 A probe into possible misconduct related to a U.S. Environmental Protection Agency (EPA) site in North Birmingham has been reborn, according to a report today at banbalch.com. From the report:

Blake Andrews and Mike Tracy, what have you done?

We understand that more discovery requests and video depositions are in the works.

Newsome, who has hired an around-the-clock private security firm and installed cameras and motion-detectors at his home and offices, was nearly killed in a head-on car crash in September that some speculate appears to have been intentional.

Could the U.S. Department of Justice renew its probe of the investigation, which apparently was compromised from the outset under former U.S. Attorney Jay Town? That remains unclear:

The rebirth of the North Birmingham Bribery Investigation comes just months after disgraced U.S. Attorney Jay E. Town resigned after we, the CDLU, spurred a U.S. Department of Justice probe.

The alleged secret deal between Town and Alabama Power to shield and not even mention the utility during the criminal trial is history.

Alabama Power CEO Mark A. Crosswhite and other insiders at the utility will be subpoenaed for a video deposition and all their correspondence, memos and documents, including check copies and payments made to the money laundering entity, Alliance for Jobs and the Economy (AJE).

Mike Tracy, the former CEO of Drummond, and Blake Andrews, General Counsel at Drummond, who allegedly set up David Roberson as the “fall guy,” will be grilled for their alleged unconscionable conduct.

And all the entities who funded and partook in the Astro-Turf entity AJE will have to answer for their conduct. (Who told you to donate? Why did you donate? What were the goals according to those who solicited you?)

And those who testified or bore witness at the criminal trial in the summer of 2018 will have an all-star reunion show. Joel I. Gilbert, Steven McKinney, Oliver Robinson, Trey Glenn, Scott Phillips, Irving Jones, Jr., Chad Pilcher, and Lance LeFleur to name a few.

The Pandora Box is about to open and show who was really responsible for pulling the strings and engaging in the the bribery scheme spearheaded allegedly by Balch.