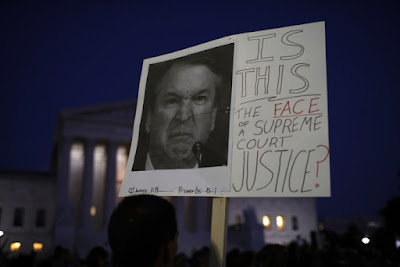 It's starting to look like Russian interests have infiltrated every branch of our government.

King and Spalding is heavily involved with Russian energy companies.

Maybe the most insightful piece I've seen on the Kavanaugh background check. Thank you, Jill Simpson.

Just another level of fraud in the whole Kavanaugh process.

This all falls back on voters who are stupid enough to repeatedly send unscrupulous con artists like Grassley, Hatch, and McConnell to the Senate.

Kavanaugh and Wray are buddies, going back to Yale Law School.

Maybe Mueller needs to take a look at the FBI director.

People should keep this in mind. Republicans are not just voting to confirm Kavanaugh, they are voting to protect a president who is a tax cheat, sex abuser, criminal, mafia figure, and Putin puppet.

Won't it be fun when Kavanaugh is sitting on the Supreme Court and gets indicted for rape, attempted rape, and kidnapping?

Russian mafia has taken over the U.S. Film at 11.

A summary of this morning's vote:


In the end, the Senate voted 51-49 to move ahead with Kavanaugh’s confirmation. Senator Lisa Murkowski of Alaska was the only Republican to vote no, while Senator Joe Manchin III of West Virginia was the only Democrat to vote yes, according to the New York Times


Susan Collins and Joe Manchin are real "profiles in courage."

Your scenario might sound "out there" to some, but it could actually happen.