Who is "Mr. Blue Shirt," what agency does he work for, and why was he at our Missouri eviction, where he ended up brutalizing Carol and breaking her arm? 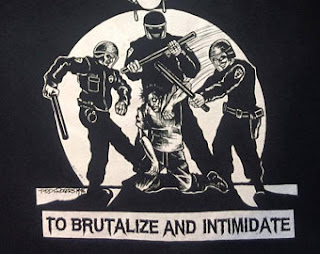 The individual who slammed my wife, Carol, to the ground and broke her arm during an unlawful eviction in September 2015 -- we call him "Mr. Blue Shirt" -- was not present at her recent "assault" trial. That raises these puzzling questions:

(2) Does he work for someone other than the Greene County Sheriff's Department (GCSO)?

(5) Why is the GCSO going to considerable lengths to protect his identity?

During the discovery process, Carol asked for his identity multiple times, in multiple ways. She asked for the names and addresses of all GCSO personnel who were on our rented property that day. The prosecution first responded by giving only the names of the three cop-witnesses (Christian Conrad, Jeremy Lynn, Scott Harrison) they intended to call, essentially claiming that any other names were irrelevant.

Carol then asked for the names of everyone who was on the premises that day, other than us, and she got five names -- with Sheriff Jim Arnott and Lt. Debi Wade, author of the Probable Cause Statement, added as a fourth witness. That answer still didn't cut it because there clearly were more than five law-enforcement types there that day; our estimate is 6-8.

We have not considered this possibility until recently, but perhaps the prosecution answered Carol's first query in a certain way because "Blue Shirt" (and perhaps others) did not work for the GCSO.

Perhaps the prosecution answered the second query in an evasive manner because . . . well, they were determined to protect "Blue Shirt's" identity, and prosecutors didn't care if they had to violate Brady v. Maryland, 373 U.S. 83 (1963) to do it. After all, enough prosecutors violate Brady that some analysts have said the legal landscape is plagued with "an epidemic of Brady violations."

Bottom line: We increasingly see reasons to believe "Mr. Blue Shirt" did not work for the GCSO? That leaves these questions: Who did he work for, and why was he there?

So far, we have two theories, but we certainly are open to other ideas:

(1) The Alabama Bingo Trial Theory -- This comes from a regular reader who is most clever and insightful. In late July 2015, I wrote a series of posts about documents that had been released related to the Alabama Bingo Trial. The documents mostly involved transcripts of closed-door meetings about alleged sexual misconduct involving FBI agent Keith Baker and various women connected to various court proceedings. Also at issue were some 8,000 missing text messages sent to, and received by, Baker. The reader's theory is that the U.S. Department of Justice (DOJ) thought I possessed documents that might prove damaging or embarrassing to their efforts in the bingo matter. Under this theory, "Blue Shirt," was a DOJ operative -- perhaps an FBI agent or trainee -- who was sent to conduct a bogus eviction that really was designed to intimidate us and examine any documents we might have.

Part of this theory is that "Blue Shirt's" actions indicate he is not a real law-enforcement officer or he is inexperienced at such work. According to the reader, no real cop would have yanked on Carol's arms, while she was seated on the ground, in an effort to handcuff her. A real, experienced cop would have known such an act was likely to cause an injury. In fact, the reader suggests, Sheriff Jim Arnott (standing just a few feet away) knew instantly that Carol was injured, so he created the bogus criminal charges on the spot.

(2) The "Luv Guv" Bentley Theory -- This is my theory, and it arises from the fact that -- contrary to what you might have heard on The Rachel Maddow Show -- I broke the story of Gov. Robert Bentley's affair with senior aide Rebekah Caldwell Mason on Aug. 31, 2015, nine days before our eviction. We later learned from the Alabama House Judiciary Committee Impeachment Report that Bentley knew by May 7, 2014, that his wife had taped him in a lovey-dovey phone conversation with Mason. On August 5, 2014, two members of Bentley's staff -- Spencer Collier and Wendell Lewis -- confronted Bentley about the tapes and tried to nip the affair in the bud.

That did not work, and we learned that Bentley became obsessed about the tapes and wanted to hurt people who knew about the affair or perhaps had the tapes. He even threatened to arrest his wife and her assistant, Heather Hannah, whom the governor blamed for the tapings.

It's certainly not a stretch to think Bentley might have sent "Blue Shirt" (and maybe others) to Missouri to rough up Carol and me and see if we had copies of his "Luv Guv" tapes.

That suggests "Blue Shirt" might have been a member of Bentley's security detail or an employee of the Alabama Law Enforcement Agency (ALEA).

Either way, "Blue Shirt's" presence, his "bull in a china shop" actions, and the apparent determination of Missouri types to hide his identity suggests our eviction wasn't about any of the issues you normally associate with such a proceeding. It increasingly looks like someone thought I had damning information, and they wanted to make sure I was not able to publish it.
Posted by legalschnauzer at 6:07:00 AM