How can my wife, Carol, be guilty of assaulting a deputy who unlawfully was on our property and failed to follow county procedure for conducting an eviction? 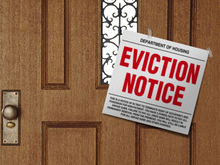 My wife, Carol, has been found guilty of "assault on a law enforcement officer" during our unlawful September 2015 eviction in Springfield, Missouri. But on at least two grounds, deputies from the Greene County Sheriff's Office (GCSO) could not lawfully be on our rented property, much less throw us out of our home. The deputies' own words -- under oath, in court -- show their actions were unlawful. and they were not able to even follow the county's own procedures.

The first issue can be found on page 1 of the judgment in Carol's case. (The judgment is embedded at the end of this post.) In the second paragraph is the following language:

On August 27, 2015, an interlocutory judgment for possession was entered against the Shulers, with a future trial date established on the issue of damages.


(Note: This is false on multiple grounds: The interlocutory judgment was issued in court on August 27, but it was not entered with the court -- making it somewhat authoritative -- until August 31. This clearly is shown on the docket, and means the eviction (set for Sept. 9) was scheduled inside the 10-day window when no execution can take place. Second, the future proceeding was set mainly for our breach-of-contract counterclaim. That is not clear on the docket, but it was made clear in court. The interlocutory judgment issued no amount of money damages against us, so it's not clear why that issue would need to be addressed at a later date.)

Bottom line: The rent-and-possession matter produced an interlocutory (non-final) judgment, which cannot be the basis for execution, such as an eviction. Missouri law, per State ex rel Turner v. Sloan, 595 S.W.2d 778 (MO, 1980), holds: "An enforcement of judgment by execution supposes a judgment not merely interlocutory but become final.”

In other words, thug-cops could not lawfully be on our property, much less breaking into our home for an eviction, based on a non-final judgment. Because the judgment was interlocutory, that means the cops did not -- and could not -- have a court-authorized (signed and approved by a judge) writ of execution. In fact, the "writ of execution" the prosecution produced at trial had no judge's signature and provided no authorization for the eviction, which ended with cops breaking Carol's arm. The "writ" was signed only by attorney Craig Lowther, which suggests he and landlord Trent Cowherd conspired on an unlawful self-eviction -- with assistance from the GCSO and likely from my brother-lawyer David Shuler.

The second issue is not so much a matter of state law, but rather of county procedure. And it appears Greene County does nothing to educate its sheriff's deputies about how an eviction is supposed to be conducted. How is it supposed to work? That's spelled out on the Civil Division Page of the GCSO Web site. From the site's page about eviction procedure:

The tenant should be served with, or the property posted with, a summons and petition notifying them that a lawsuit has been filed and will have the opportunity to be heard in court before any eviction. Upon the Landlord receiving a judgment for possession and filing for a Writ to Execute on the judgment for possession, the GCSO will schedule a date and time with the plaintiff/Landlord within five business days to stand by while the Landlord evicts the Tenant and regains possession of the property. The Landlord has the responsibility of scheduling for a locksmith and staff required for moving of property if needed.


In other words, under Greene County policy, it is the landlord's duty to evict -- with a deputy on hand usually for stand-by purposes. Carol should have been dealing with the landlord Trent Cowherd, or his representative, and not heavily armed cops who threw her and me in handcuffs (which is an arrest), with no grounds for doing so. We were minding our own business in our own home -- knowing we had filed a Notice of Appeal, which stayed the execution by operation of law.

In fact, the docket shows the Missouri Court of Appeals had received our Notice of Appeal, meaning it had jurisdiction over the case at that point -- and not the trial court, which had issued the interlocutory judgment.

The Greene County Sheriff's thugs did the following:

(1) They unlawfully acted on a non-final judgment, upon which any form of execution (including an eviction) cannot be based;

(2) They acted contrary to the county's own procedures, which call for a landlord to conduct an eviction, while a deputy (usually one, and he often does not even leave the car) is on hand to make sure a potentially volatile situation stays peaceful;

(3) They acted without a judge's signature, from a trial court that did not even have jurisdiction over the case at that point. The docket includes a letter from the Missouri Court of Appeals, stating it had received our Notice of Appeal, and that took matters out of the trial court's hands.

The GCSO, in essence, would have to improve to be a clown car.