Missouri prosecutor Nicholas Jain, who brought "assault" charge without probable cause against Carol, is doing the same thing in case of alleged drunk driving 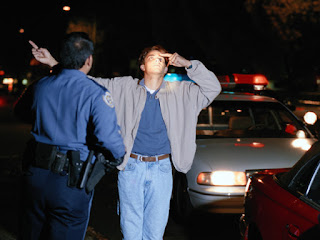 The Missouri prosecutor who is pressing bogus "assault of a law enforcement officer" charges against my wife, Carol, is doing much the same thing in a pending DUI case. And how is this for irony?Prosecutor Nicholas Jain is a convicted drunk driver himself, and he spent two years on probation as a result. You might think that little imbroglio -- not to mention three years of law school, which he entered while on probation -- would have taught Jain something about probable cause. But apparently, you would be wrong.

When I say the charges against Carol are "bogus," I mean they were brought without probable cause -- to arrest her, much less prosecute her. Anyone can read the Probable Cause Statement in her case (embedded at the end of this post) and see that not a single named human makes any accusation of wrongdoing on Carol's part. That means there is no probable cause. Even Officer Jeremy Lynn, the alleged "victim" of a push from Carol as he launched an unlawful eviction, states in his incident report that he initiated contact with Carol, by grabbing her -- and under Missouri law, with the central element of the offense being who "caused (or initiated) physical contact" -- that means Carol is not guilty. That has been apparent since we learned about the charge in January 2017. (Incident reports from Lynn and other officers also are embedded below.)

The Greene County Prosecuting Attorney's Office, under the direction of Dan Patterson, seems to make a habit of bringing cases without probable cause. And Nicholas Jain seems to wind up in the middle of such cases. Patterson and Jain recently received an undeserved victory when the Missouri Court of Appeals overturned a trial-court ruling that a DUI case -- State v. Charles Hollis Roux -- was launched without probable cause.

We do not yet have access to the full file on the Roux case, but our preliminary research indicates the appellate court cut a huge favor for Patterson and Jain. The record before us makes it clear trial judge Margaret Holden Palmietto (who also is handling Carol's case) was correct to find the Roux charge was brought without probable cause -- and there was no probable cause to even administer a portable breath test (PBT) in the matter.

The record we have so far shows Deputy Jason Flora, while on routine patrol, stopped Roux's vehicle because it had a non-functioning tail light. After a brief discussion, Flora asked Roux to step out of the vehicle and submit to a PBT.

According to the case file, Flora reported smelling the odor of alcohol and stated Roux had watery and bloodshot eyes. Roux admitted to drinking two beers, and an occupant of the vehicle also admitted to drinking alcohol. Did the deputy notice anything else that gave him reason to believe Roux was driving while impaired? According to the record before us, the answer is no.

In fact, Roux's vehicle did not even have a broken tail light. He simply had forgotten to turn it on. Did Flora observe Roux driving erratically? Nope. Did he notice Roux stumble or slur his words as he got out of the car? Nope. Did a dash-cam video show that Roux was uncooperative in any way? No. Did the deputy administer any field-sobriety tests, other than the PBT, which measured .08 -- the Missouri minimum for intoxication? No.

At a hearing on a motion to suppress, at which Roux argued all evidence was unlawfully gathered without probable cause and was due to be excluded, Judge Palmietto granted the motion and pretty much eviscerated the state's case. Here is her notation in the docket at case.net (State v. Charles Hollis Roux, Case No. 1631-CR00195.):

AFTER REVIEWING THE EVIDENCE PRESENTED AT THE HEARING, THE COURT FINDS THAT THE DEFENDANT FAILED TO TURN ON HIS TAIL LIGHTS ALTHOUGH HIS HEADLIGHTS WERE ON. THE OFFICER STOPPED HIM FOR FAILURE TO HAVE LIGHTED TAIL LIGHTS. THE OFFICER TESTIFIED THAT HE SMELLED THE ODOR OF INTOXICANTS COMING FROM THE VEHICLE AND THAT THE DEFENDANT HAD WATERY BLOOD SHOT EYES. THE DEFENDANT ADMITTED TO DRINKING TWO BEERS. AN OCCUPANT IN THE VEHICLE ALSO ADMITTED TO DRINKING ALCOHOL. THE DASH CAM VIDEO SHOWS THAT THE DEFENDANT WAS COOPERATIVE AND DID NOT STAGGER OR SLUR HIS WORDS. THE OFFICER ASKED THE DEFENDANT TO BLOW INTO A PBT BUT DID NO FURTHER INVESTIGATION AND DID NOT PERFORM ANY FIELD SOBRIETY TEST. THAT THE FACTS THAT DEFENDANT ADMITTED DRINKING, AND THE OFFICER TESTIFIED TO BLOOD SHOT WATERY EYES AND THE ODOR OF INTOXICANTS, ARE NOT SUFFICIENT TO ESTABLISH PROBABLE CAUSE TO BELIEVE THE DEFENDANT WAS IMPAIRED. THE COURT FINDS THAT A POSITIVE PBT IS ALSO INSUFFICIENT IN THE ABSENCE OF OTHER EVIDENCE OF IMPAIRMENT, TO ESTABLISH PROBABLE CAUSE TO ARREST DEFENDANT FOR DRIVING WHILE INTOXICATED OR TO COMPEL HIM TO SUBMIT BREATH TEST. THEREFORE, DEFENDANT'S MOTION TO SUPPRESS IS SUSTAINED.

The trial court, in setting aside the revocation of Hinnah's driver's license, simply indicated that the arresting officer "did not have probable cause to arrest" Hinnah for driving while intoxicated or an alcohol-related traffic offense. "Probable cause to arrest exists when the arresting officer's knowledge of the particular facts and circumstances is sufficient to warrant a prudent person's belief that a suspect has committed an offense." State v. Tokar, 918 S.W.2d 753, 767 (Mo. banc 1996). Whether there is probable cause to arrest depends on the information in the officers' possession prior to the arrest. State v. Wiley, 522 S.W.2d 281, 287 (Mo. banc 1975). There is no precise test for determining whether probable cause exists; rather, it is based on the particular facts and circumstances of the individual case. State v. Pruitt, 479 S.W.2d 785, 788 (Mo. banc 1972).


Notice that there is no precise test for determining whether probable cause exists in a Missouri DUI case. It's left largely to the trial judge, based on the particular facts and circumstances of an individual case.

The circuit court correctly noted that the only uncontroverted indicia of York's intoxication were the smell of alcohol, the fact that York's eyes were watery, bloodshot and glassy, and York's admission to drinking one or two beers. However, the trial court, in its discretion, was free to draw the conclusion that there was no probable cause based upon its assessment of this evidence and the officer's own equivocation of the existence of probable cause.


That's two cases -- Hinnah and York -- where Missouri appellate courts upheld a trial-court finding that probable cause did not exist in a DUI case. And the circumstances of both were very similar to those in Roux.

So, why did an appellate court overturn Judge Palmietto's finding in Roux, which clearly was supported by Missouri law? Our best guess is that the three-judge appellate panel (two of them Republican appointees) felt they owed Patterson and Jain a favor. They also probably reversed in order to earn political points, in an era where the public largely is disinterested in the facts and law surrounding a DUI -- or any other kind of case.

Given Patterson and Jain's habit of bringing cases without probable cause, they do not deserve any favors. In fact, they deserve to be investigated by the U.S. Justice Department.
Posted by legalschnauzer at 6:02:00 AM