A social-media campaign to identify and shame participants in a bloody right-wing rally at Charlottesville, VA, has caused at least three individuals to lose their jobs. That raises these questions: Is it legal to "out" protesters at a public gathering, and is it OK for employers to fire those who appear to support white-supremacist views in their free time?

The answer to both questions is "yes." And it's a sign that the First Amendment does not provide the kind of expansive free-speech coverage that many Americans think it does.

Gillian B. White. of The Atlantic, addressed the issue in an article titled "Is Being a White Supremacist Grounds for Firing?" White explains how activists on the left got the outing movement rolling:

After white nationalists descended upon Charlottesville, Virginia, a Twitter account with the handle @YesYoureRacist began soliciting the identities of rally goers based on photographs. “If you recognize any of the Nazis marching in #Charlottesville, send me their names/profiles and I'll make them famous,” the account tweeted. And by famous, the user of course meant infamous.

The strategy of exposing the faces of rally attendees to hundreds of thousands of people on Twitter worked, and many were identified. By Sunday, one of those whose name and place of residence had been revealed had reportedly been fired from his job at Top Dog, a hot dog restaurant in Berkeley, California, according to Berkleyside. (A call to Top Dog went unanswered.)

The strategy that ultimately got Cole White, the man who lost his job after being identified via social media, fired directed a mix of public shaming and economic pressure not at him, per se, but toward his employer. It took only a few hours for internet users to come up with an identification, where he was from, and where he worked and then to start calling on Top Dog to let him go. That’s certainly not a brand new tactic, but it’s a variety of vigilantism to which social media is particularly well suited, finding and disseminating information and amplifying calls to action far beyond what would be possible within a single geographic community. After the news broke that White had been fired, many who had participated tweeted delighted responses. ”Awesome! We must shame them into oblivion,” wrote one user.


The left-leaning folks might not find it so awesome if such tactics are used against them someday. For example, what if a pro choice counter-protester at an abortion clinic were photographed, and the picture made its way to his boss, who happens to be pro life? It might not end well for the pro-choicer, as The Atlantic's White explains:

Of course, the consequence of this dynamic is that taboo political ideas of all stripes can lead to workplace sanctions. While many on the political left are now lauding firings as a way to hold white supremacists accountable, it’s also worth remembering that pressuring employers to sever ties based on political activities, or social and racial beliefs, has historically been targeted in the other direction. McCarthyism involved reporting Communists and Communist sympathizers and pushing them out of the workforce, and Hollywood in particular. And as Walter Greason, a historian and professor at Monmouth University said in an interview, “Historically it's more dangerous as an employee to be associated with racial justice and the NAACP, than it was to be affiliated with the KKK.”

What about the First Amendment, what about free-speech protections? Well, White writes, they aren't all that strong, especially when it comes to protecting jobs:

In many cases, firing someone for their political ideas raises few legal issues. Though public-sector workers can’t be terminated for their political views, and many union contracts require that an employer demonstrate “just cause” for firing someone, federal law doesn’t offer any protections for expressing political views or participating in political activities for those who work in the private sector and don’t have a contract stating otherwise, according to Katherine Stone, a law professor at UCLA who focuses on labor law. (There are a few caveats for those in states or municipalities with laws that go beyond the federal mandate.) But more to the point, Stone says, it’s not at all uncommon—or illegal—for private-sector workers to get fired for what they do in their free time if it reflects poorly on their employer. In cases such as this, an employer in the private sector simply isn’t required to employ someone who exercises their right to free speech, Stone says.

First Amendment protections only apply to government workers. So, if you work for the federal government, or, for instance, a sheriff's office, you have First Amendment rights. If you work in the private sector, you don't have any constitutional free-speech rights. In many, perhaps most, instances, a private employer can legally fire an employee for his or her speech, no matter the content. It is, however, a double-edged sword. In most states, you can be legally fired for attending a white supremacist rally or for attending a civil rights march. Four states, California, Colorado, North Dakota and New York, have laws that disallow employers from firing employees for lawful off-duty conduct. Arguably these laws would not protect an employer from participating in a violent rally. Another national and broad protection is speech that involves "concerted workplace activity," for instance, speech about pay or workplace conditions. This includes speech outside of the workplace and on social media. This protection is fairly broad and has been held by the National Labor Relations Board to protect even profane speech as long as it involves a commentary about workplace conditions.


Here are the far-right rally participants known to have lost their jobs:

* Nigel Krofta -- worked as a welder and mechanic at Limehouse and Sons Inc. in Ridgeville, SC.

For the record, a man from my current neck of the woods (southwest Missouri) has been identified as a white-nationalist participant at Charlottesville. His name is Ted Von Nukem, who reportedly lives "somewhere between Springfield and Joplin." No word yet that he has lost a job. A video of Von Nukem can be viewed at the end of this post.


… it’s me—John Stevens. I’m the boss at the feed warehouse where that guy on the left works.

… and it’s me—Randy Ott. I’m the boss at the accounting firm where that guy in the middle works. 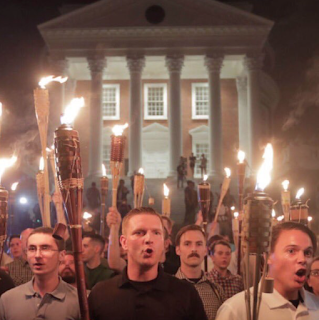 … and it’s me—Malik Lewis. I’m the boss at the pharmacy where that guy on the right works.


… and it’s me—Candace Cohen. I’m the boss at the AT and T store where that guy with the mustache works.

… and it’s me—Hillary Chen. I’m the dean at the college where that kid in the plaid shirt attends.

Yup, it’s us. And, as a group, we’d like to say: You’re fired. Expelled. Dumped. Kicked to the curb, like a bunch of low-level racist asswipes.

Did you not think we’d recognize your faces? Did you not think this would get out? You know we have black customers, right? Oh, and Jewish ones, too. A couple of Asians even. Soooo … you’d probably have to agree they don’t really want to frequent businesses staffed by white supremacists. It’s funny how that works.

Say what you want about the pre-Donald Trump KKK—at least they were smart enough to wear hoods. You guys … look at you, marching around like you’re living in 1928 Virginia. You know we have iPhones, right? And TVs? Your faces are everywhere. You’re embarrassments to the world.