Documentary about the prosecution of former Alabama Gov. Don Siegelman receives stellar review, plus a pledge to help arrange screening in Montgomery 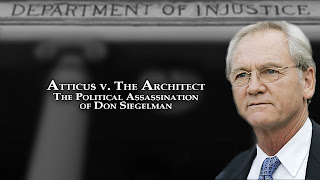 A documentary about the political prosecution of former Alabama Gov. Don Siegelman is "worth your time and your anger," according to a review at the Alabama Political Reporter (APR). The Prattville-based news site pledged to help arrange a showing of the film in Montgomery.

The film, Atticus v. the Architect: The Political Assassination of Don Siegelman (directed by Steve Wimberly), had been scheduled for a showing at the Capri Theatre in Montgomery. But former federal prosecutor Leura Canary, who helped ramrod the Siegelman case, serves on the Capri's board of directors and objected to the screening. The board voted to renege on its agreement to rent the theater for a group to show the Siegelman film.

That act of not-so-subtle censorship, however, has not kept the film under wraps. After its premiere on May 10 at the Alabama Theatre in Birmingham, the film has had screenings in Atlanta (two shows, including one at Netroots Nation) and Tuscaloosa, with upcoming shows in Decatur, AL (8/18, Princess Theatre) and Leesburg, VA (8/23, Cobb Village 12).

Josh Moon, of APR, says the documentary makes for a powerful viewing experience. He calls it "scorching." From his review:

“Atticus v. The Architect: The Political Assassination of Don Siegelman” is a scorching documentary, particularly if you’re one of the many Republican officials who played a role in the prosecution of Alabama’s former Governor.


The film does not offer much in the way of new information about the Siegelman case, Moon writes. But it takes a complex story and presents it in a solid, professional, understandable package for a mainstream audience:

For all of the local attention this film has received – thanks in large part to Canary’s pushback against allowing the film to be shown in Montgomery — “Atticus” doesn’t really reveal much in the way of new information. What it does – and it’s the first medium to do so – is put the whole sordid ordeal in one tidy package that’s easy for the common person to digest.

That alone would be reason enough for Canary and others to want it stopped. Because it’s only through that perspective, with all of the facts and the sequence of events laid out before you, that you understand the grandness of the scheme against Siegelman. And it is only through that perspective that the impossibility of such a grand conspiracy can be removed, and the lengths and depths to which some will go to gain a political advantage can be exposed.


Some of the most prominent conservative political figures of the 2000s receive withering treatment as underhanded operatives who helped create, and benefit from, the Siegelman case:

Starting with the 2002 gubernatorial race between Siegelman and Bob Riley, “Atticus,” written and directed by Steve Wimberly, travels a course of corruption, much of which it lays at the feet of Riley, Republican operative Karl Rove, Billy and Leura Canary and Eric Holder.


It features interviews with some of the state’s most powerful and well-known political players. And there’s even an appearance by the most famous crooked lobbyist in DC, Jack Abramoff, who recounts in detail how he and his Choctaw Indian pals forked out $20 million to beat back a lottery and to get rid of Siegelman.


By the end, you walk away with two thoughts: Alabama politics is dirtier than I imagined (which is saying something) and Don Siegelman shouldn’t have been indicted, much less convicted.

It is well worth your time, and your anger.


As for future showings, Moon reports that APR and its affiliated The V television program plan to assist:

APR and “The V” hope to help with that, at least in the Montgomery area. We should have news soon on a new Montgomery screening location and date for the film.